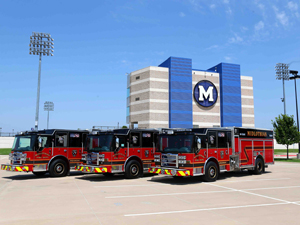 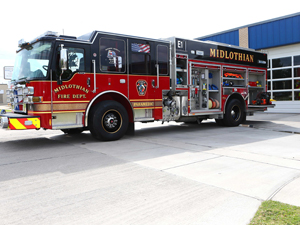 The Midlothian (TX) Fire Department, which protects a city of the same name in northwest Ellis County, Texas, has the distinction of being the country’s first fire department to have a fleet consisting of all Pierce Manufacturing Dash CF vehicles.

This past summer the department took delivery of three Dash CF pumpers to replace its existing first-line apparatus, says David N. Schrodt, chief of Midlothian. Once they had the new pumpers in service, the department saw the need for an aerial device and found a way to finance the purchase, ordering a Pierce Dash CF 100-foot quint steel aerial platform to be delivered in June 2014.

Midlothian Fire Department has 45 full-time firefighters assigned to fire suppression on three shifts in three stations, protecting a population of 19,100 in 38 square miles.

The Dash CF pumpers feature a tilting cab-forward design that repositions the engine rearward and down between the frame rails, with an open interior configuration to increase driver and officer cab space, visibility and serviceability.

Schrodt says the Dash CF pumpers responded to two structure fires during the first two days they were in service, and have performed up to the department’s expectations. “We wanted the three vehicles delivered at the same time so we could place them in each of our stations,” Schrodt says. “The pumpers they replaced were six, nine and 16 years old, and our reserve pumper was 22 years old.”

The chief says that all three Dash CF pumpers are identical, with standardized equipment and compartmentation so there is no difference when a firefighter moves from one station to another. Each pumper carries a 1,500-gallon-per-minute (gpm) Pierce Ultimate Configuration (PUC) pump, a 750-gallon water tank, a Hercules compressed air foam system (CAFS) and cost $583,000 without equipment.

“We think CAFS is something every fire department should look at,” Schrodt observes. “You have to train your firefighters to a higher level to use CAFS, but it multiplies water use so greatly, knocks down fires so quickly, and reduces water damage that it should be considered.” 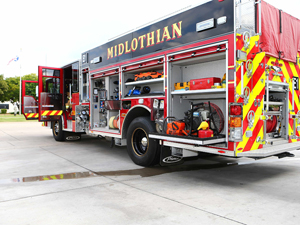 Pat Siddons, president of sales for Siddons-Martin Emergency Group, the Pierce dealer for Texas; Louisiana; and New Mexico, says that after Midlothian took delivery on the pumpers, it saw the need for a ladder truck and secured funding through business and economic authority sources in the city, which funded the entire cost of the aerial.

“We don’t have the staffing to operate it only as a truck company, so we chose to go with a quint that can be used as a pumper if necessary,” Schrodt says. He  adds that the Midlothian Development Authority, RailPort, and a Tax Increment Reinvestment Zone were responsible for coming up with $1.2 million to buy the Dash CF aerial and equip the vehicle. “They are responsible for a large number of industrial and commercial occupancies,” he says, “and wanted to pitch in and help us get the protection of the aerial and its equipment.”