The Long Hill (CT) Fire Department works on a 20-year replacement schedule for its fire apparatus. So when its rescue truck came up in the rotation, the department set up a committee that would take a year’s worth of work to develop the basic design of what the department needed to serve its district.

Greg Sanfanandre, a Long Hill captain who served on the apparatus committee, says once the committee established the truck’s basic parameters, the group contacted a number of manufacturers to determine which one was the best fit for the department. Of the three final bidders on the rescue truck, Long Hill firefighters chose Marion Body Works to build the vehicle. 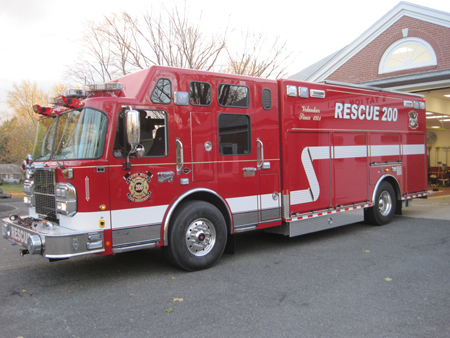 The Long Hill Fire Department has 70 volunteer firefighters operating out of three stations. They cover a 23-square-mile district, half of it as first due and the other half on automatic mutual aid. The department also has four pumpers, one heavy rescue, a 102-foot rear-mount platform quint, one hose wagon, four chief’s vehicles, and one utility pickup truck.

“We had a rescue-pumper before so we replaced it with another one,” Sanfanandre says. “Our new Marion rescue-pumper has a Hale 250-gallon per minute power takeoff (PTO) pump, a 300-gallon water tank with a 30-gallon integral foam cell for Class B foam, and one 200-foot 1¾-inch hoseline in the front bumper.”

Sanfanandre points out that with previously purchased vehicles, the department ran out of room very quickly on the rigs. So, the committee designed the rescue-pumper for future growth and expansion. “This one is designed so you don’t have to move anything in a compartment to get to another piece of equipment,” he says. “We also have a walk-up staircase that folds against the rear of the vehicle to get access to the four coffin compartments on the top of the truck.”

Rob Murphy, Long Hill’s rescue captain, says the equipment layouts were set up so they were easy to use and maintain. “The ideas and solutions that the Marion people had for the equipment and how it would be mounted were terrific,” Murphy says. “They spent a lot of time with us on compartmentation, and it really shows in how well they work.”

Murphy notes the rescue-pumper has a couple of static shelves that can be adjusted, but the rest of the compartments contain a mix of slide-out drop-down trays, along with two vertical sliding tool boards for struts and hand tools. The compartment above the pump panel is transverse, holding a Little Giant ladder and a Stokes basket.

Shane Krueger, Marion’s national sales manager, says his company built the Long Hill rescue-pumper on a Spartan Gladiator ELFD (extra long four door) cab and chassis because the fire department has two Marion-built engines on that chassis and was very pleased with them. “They told us those chassis are bulletproof and they wanted the same chassis for the rescue-pumper,” Krueger says. “We put that together with a Cummins ISL-9 425-horsepower diesel engine and an Allison 3000 EVS automatic transmission.”

Jon Schrumm, owner of Northeastern Fire Apparatus, the dealer who sold the $525,000 vehicle to Long Hill, says that Marion developed a core in the center of the vehicle where the Harrison 30-kW PTO generator system has an oil tank common for the vehicle and the truck’s hydraulic systems. “There are two different pumps that use the same oil reservoir,” he points out.

“No matter what side of the rescue you’re working on,” says Murphy, “you have hydraulic equipment, cribbing, hand tools, and lighting immediately available for you to use.”

Building Relationships with your Maintenance/Fleet Personnel