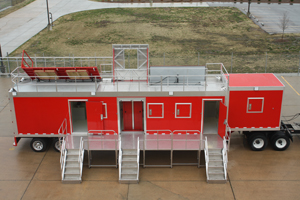 The Kansas Fire and Rescue Training Institute (KFRTI) is responsible for traveling the state and providing fire training instruction for local fire departments, and because of its busy schedule, KFRTI was in the market for a new multiuse training prop that would encompass various aspects of fire training in a single unit.

Glenn Pribbenow, director of KFRTI, says, “We are the designated state training agency for the fire service in Kansas, created in 1949 as part of the University of Kansas, and because we have no fixed service location, the law requires us to maintain a traveling instructional service for fire departments.”

Since there is no state fire academy, KFRTI maintains a fleet of vehicles and props—three semi tractors, four semi-trailer-based units, five smaller bumper-hitched training trailers, and a Hackney-built support unit—each of them a singular purpose-based prop. Pribbenow says the organization had the need for a multiuse unit that could be used to conduct various aspects of fire training in a single visit.

KFRTI has a search and rescue 35-foot trailer on a gooseneck hitch that has movable walls and two levels used for self-contained breathing apparatus training (SCBA), as well as a stainless steel trailer for live interior firefighting, built by ProSafe of Brampton, Ontario, Canada. The group also has a flammable liquids and gases trailer that can run four props at the same time to simulate propane and flammable liquid fires, as well as a 25-foot trailer used to teach forcible entry firefighting skills, such as forcing doors, breaking glass and opening roofs.

The new trailer that KFRTI had built by Unruh Fire includes all of those training aspects, except live fires, into a single 50-foot long and 102-inch wide multiuse training trailer.

Pat Prouse, training trailer division manager for Unruh Fire, says KFRTI wrote the specs on what it wanted, developed a conceptual drawing, and then put the unit out for bid. Unruh Fire was awarded the contract.

The multiuse trailer consists of five rooms, as well as two roof props, Prouse says. The trailer’s back room is for storing supplies and equipment, and can store the unit’s platform deck and handrail system when they are not in use. The multiuse trailer has a platform placed on one side of it to put firefighters at grade when they make entry to the trailer.

The next room forward is a sprinkler room containing a fully functional sprinkler system. Pribbenow says the sprinkler room has a fire department connection outside, a six-inch riser and an assortment of sprinkler heads. “That room has every kind of sprinkler head we could come up with,” he notes. “The interior wall is made out of metal so it can be sealed, it has floor drains, and a valve on the system to operate it with a quarter turn so we can let firefighters meet the requirement of stopping the flow from a sprinkler head.”
The next room toward the front has a Friction Force training door mounted into the trailer that is set back and accessed through a roll-up door. That room also houses the bottom of a staircase leading to the roof props, and has props for sheetrock removal on its walls and ceilings.

Moving forward, the next room holds the staircase, wall and ceiling props, and controls for the onboard generator.

The front room also has wall and ceiling props, and houses a glass-breaking prop that holds 24 12- by 12-inch glass panes that can be broken out and replaced quickly. The prop is tilted so broken glass falls into a catch basin.

On the trailer’s roof are two props—a roof ventilation prop and a window prop. “The roof vent prop is hydraulically adjustable for two different roof pitches,” Prouse points out, ” and it can be worked from a roof ladder or off of a ground ladder. The window prop folds out and allows training for a rescue from a second story window.”

Unruh Fire delivered the multiuse trailer to KFRTI in April of this year and the training agency is finishing up on outfitting it. Purchase price of the trailer was $272,000. “We will schedule the first training of our instructors on the trailer for July and on August 1 it will be available for fire department training,” Pribbenow says. “We expect it will be very busy because with every training device we’ve developed, we’ve experienced about 100 requests in the first year.”