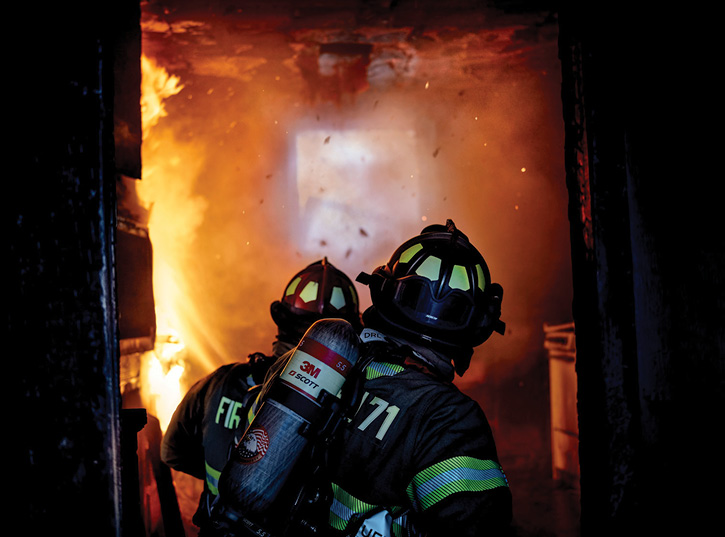 In 2014, New York fire companies responding to an early morning fire extended hoselines for fire suppression in a single-family residence. Multiple crews and firefighters from various districts battled the blaze. Before the incident was over, confusion over the location of crew members and the ultimate separation of one of them while inside the home would lead to the death of one firefighter (NIOSH Fatality Report F2014-26). Following a thorough post-incident investigation, “lack of crew integrity” and “ineffective personal accountability” were significant contributing factors. Sadly, report ingredients such as these are not unique. Lack of essential tracking of workers in the dangerous conditions encountered by frontline firefighters is a chronic ingredient of line-of-duty death reports and remains one of the top reasons for firefighter deaths (NIOSH).

To identify trends and improve the overall safety of the industry, the National Institute of Occupational Safety and Health (NIOSH) completes detailed investigations of every firefighter fatality. These fatality reports, since 2000 reference, “personnel accountability” more than 80 times (and “crew integrity” over 40 times), identifying a clear ongoing issue of unreliable worker tracking and cohesion on the fireground. Unfortunately, while such recommendations have resulted in some operational improvements, the Fire Protection Research Foundation emphasizes that there still exists no widely accepted system to track personnel on the ground (NIST, Special Report 1191).

Fire scenes benefit from the identification of important work zones, such as divisions (sectors or groups). Such geographic division not only provides for improved operational effectiveness, it allows for safer more effective management of personnel within these areas. Prior to these geographic assignments, fire scenes were more chaotic, and the results were often catastrophic for rescuers and those they came to help. Today, various standards define fire scene divisions, and any scene without such identifiers would be considered substandard. Scene firefighters and those supervising them benefit from the understanding of where the fire is located and where their crew and others are broadly assigned.

While firefighters benefit from clearly outlined emergency scene divisions, the more detailed identification of the fire scene’s most critical operators, its firefighters, has remained obscured and unfortunately an accepted challenge on the fireground. An industry not accustomed to engaging risk on an on-going basis, like the fire service, would consider the oversight of such a base system ingredient unacceptable. An accountability system is vulnerable to failure under stress, such as a firefighter’s mayday call, without addressing this basic ingredient. Identification of crew members on the fire scene isn’t about company pride, it’s about providing a tool that makes it easier for crews to stay together, a mechanism for supervisors to rapidly ID crew they are responsible for, and ultimately about saving lives.

A Future of Firefighter report by NIOSH states that practical solutions for firefighters must be “user-driven” to ensure they are functional. These tools must also be hyper-focused solutions and built around the reality of how users interface with them. This may be one reason why many “accountability” solutions to date have had difficulty with wide-spread acceptance. They do not account for operational weak points or solve issues in ways that stand up to the harsh conditions encountered on the fireground.

Products and regulations have attempted to improve crew integrity and accountability. Prior to 2000, the NFPA worked to address the common problem of firefighter tracking with its adoption of Resource Accountability in NFPA 1561, emphasizing “accountability of personnel” as a top priority. Broadening its presence in critical industry safety guidelines, the term personnel accountability would also soon be found in federal OSHA standards and state incident management guides, such as FIRESCOPE. While these guidelines have proven beneficial, the industry hasn’t improved sufficiently in areas critical to bolstering these end goals.

There currently exists no widely accepted method of tracking firefighters on the fireground, and the absence of a firm process, or common tool suggests deficiencies in existing modalities (NIST, Special Report 1191). Legacy ID accessories, such as helmet and jacket names, were designed to meet early, simple needs of worker identification but do not rise to the level of performance needed in today’s highly managed and (desirably) safer fire scenes. Passport tags systems, which track units within divisions, are useful roll-call tools, but do nothing to assist in the ongoing identification of personnel working within divisions remote from tag collection points. Digital systems are making their way into the market as well. These systems, much like their analog passport counterparts, offer identification of workers from remote positions, such as the incident command post, but offer nothing in the way of actual front-end worker identification for those in the danger zone.

Traditional identification mechanisms, such as those on helmets or jackets, were made popular decades ago because of their simplicity but weren’t designed to address the full level of identification concerns now facing emergency responders. Markers on these gear components are difficult to read and unreliable. Even in light of their shortcomings, these areas have remained vehicles for ID accessories because they are simple. Identification doesn’t need to be a high-tech component (although high-tech and low-tech solutions often complement each other successfully). It does need to be visually loud and 100 percent reliable.

The firefighter’s SCBA may be best positioned to improve firefighter scene accountability. Breathing apparatus are stored inline with crew deployments, which makes them incredibly accurate ID vehicles, and the breathing assembly’s large profile (often currently promoting the manufacturer’s brand), is an area that provides a more visible ID area than any other PPE component. It is more stationary and visible than a firefighter’s helmet and not obscured like a firefighter’s jacket. The SCBA mask is perhaps the most critical invention of the 20th century related to firefighter success, but also the nail in the coffin for worker identification. SCBA manufacturers may consider some sense of obligation in offsetting the literal masking of their users’ identities. Shifting where simple identification tools are stored to the SCBA may provide the reliable identification missing on today’s fireground.

Crew identification shouldn’t be a distant consideration when evaluating whether firefighters have the right gear to do their job. It’s a critical piece of PPE. Regardless of the ID tools selected, functional fire scene accountability requires the direct oversight of its firefighters, and this oversight requires identification that actually works in the firefighters’ environment for it to be dependable. These real-world identification solutions don’t have to be high-tech. They need to be reliable and user-friendly. Accepting identification of workers in dangerous and smoky conditions as simply a normal challenge is a terminal flaw to any accountability and tracking system. Failure to correct this basic identification issue will continue to place firefighters at greater risk.

CHRISTIAN BOULAN is a captain with the Oceanside (CA) Fire Department and is a 25-year veteran of the fire service.