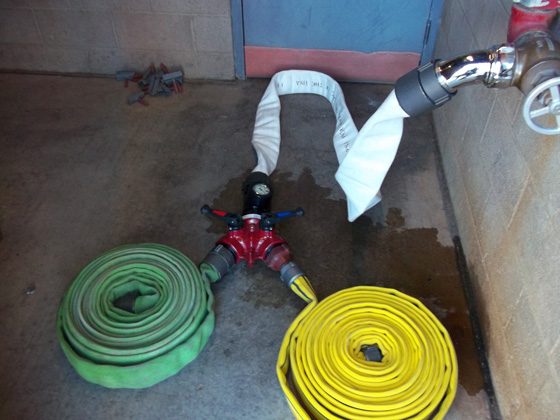 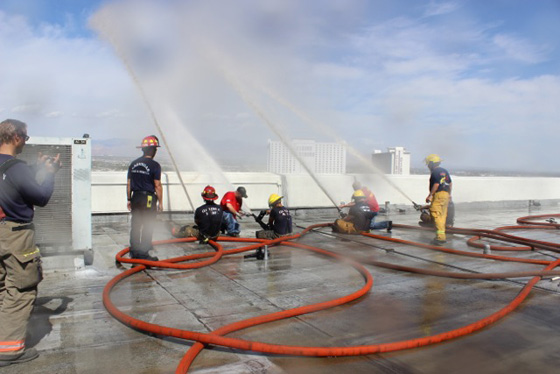 Have you ever heard the saying that says there is more than one way to skin a cat? Let’s use this statement regarding the fire service. Yes our main goal is to fight fire. However, there are so many different ways to do it while still reaching the final outcome. Going one step further, what about high-rise firefighting, mainly the handlines that are used. I have been teaching water delivery in the fire service for about 30 years now, and the topic of high-rise handlines has been in the picture the whole time. I’ve seen a lot of changes, and most seem to work. Some tactics and equipment contradict each other, but the final outcome is that the fire gets extinguished. I have put together some good sound tactics along with the proper equipment that I feel get the job done. This article is based on tactics gathered from others as well as myself. Keep in mind that the contents of this article is based on water delivery only.

The purpose of this article is to provide information that will help firefighters in making a decision on what size handline to deploy at a high-rise fire.

There are four basic components for a high-rise handline operation. They are the hose, the nozzle, a 2.5- x 2.5-inch gated wye, and an inline pressure gauge.

Hose and Nozzle
Choosing the proper hose and nozzle combination needs to be based on delivering the required flow for fire attack using low system operating pressures. The reason for this is simple. High-rise fire protection systems are limited in operating pressures because of elevation, friction loss in plumbing, pressure-reducing devices, and probably the most concerning issue, system pressures established by NFPA 14, which is the code that high-rise fire protection systems are designed from.

There are two basic sets of standards that have been put in place by the NFPA that can effect water delivery. The first standard was in place until 1993, and the second standard which is still in place started in 1993. Please note that structures with the pre 1993 standards were not required to upgrade to the Post 1993 standards.

Because of the above-mentioned pressure issues in fire protection systems, most fire departments have opted to exclusively use 2.5-inch handlines with smooth bore nozzles for all fire scenarios big and small. The true fact is that the 2.5-inch handline will provide the most water every time. However, along with the positive flow capabilities of this line there are also negative deployment and kinking issues that have to be dealt with because of the size of the hose itself.

The low standpipe outlet pressures mentioned above have been misleading causing firefighters to assume that smaller handlines such as 1.75- and two-inch could not be used because of the higher friction loss these lines possess as compared to the 2.5-inch. Let’s analyze the true pressures that can be expected in a high-rise fire protection system.

Again, fire protection systems are based on a 500-gpm flow capability and after flowing 500 gpm, the standpipe outlet residual pressure will need to be either 65 psi or 100 psi depending on when the system was built. The true fact is that if 500 gpm is not flowing, which more than likely it would not with the initial handline deployment, the standpipe outlet residual pressure will actually be higher. The following chart will illustrate this. Actual flow tests were conducted at the 25-story Riviera Hotel in Las Vegas Nevada using 1.88-, two- with 2.5-inch couplings, and 2.5-inch hoselines 150 feet long. All hose was provided by Key Hose. We used smooth bore nozzles with 7/8-, 15/16-, one-, 1 1/8-, 1 3/16-, 1 ¼-, 1 3/8-, and 1 ½-inch tips to deliver the water.The flow tests were done on the roof to show a worst-case scenrio of what the pressures and flows would be. The system was rated at 500 gpm with a 65-psi standpipe outlet residual pressure.

As you can see, the standpipe residual pressures increased significantly from the rated 65-psi pressure. Furthermore all flows exceeded 150 gpm, which is well within the standard for interior attack lines. Keep in mind that the 65-psi system we tested these lines on is a worst-case scenario regarding NFPA codes and their restrictions. Any structure built after 1993 will have the 100-psi standpipe outlet pressure which, in turn, means that the handlines will flow even more water.

The size of the hose to be used should reflect the requirements of the fire and the system pressure. The gpm needs to match the Btus, and the diameter of the hose needs to be able to overcome the system low pressure issues. NOTE that in order to have the luxury of an easy to deploy 1.75- or two-inch handline, it is imperative that a 2.5-inch hose pack be brought into the structure as well just in case its use is warranted.

Low-pressure nozzles are a must in a high-rise operation—even with the higher residual pressures indicated in the chart. Remember, system pressures are going to be low, so lowering the nozzle pressure from the standard 100 psi to a much lower pressure in the range of 40 psi to about 60 psi greatly improves water delivery capabilities.

An interesting thing to note is that the 1 3/16-inch tip, which is in its beginning phase, was designed for a high flow with a lower nozzle reaction than the 1 ¼- tip on a 2 ½-inch handline. At 50-psi nozzle pressure, this tip can flow 300 gpm. We were able to incorporate this tip into high-rise operations as a high-flow tip as well but for different circumstances.

As a low-pressure nozzle on small-diameter hose, we were able to increase the flow from the 1.88- and two-inch handlines The numbers for the 1.88-inch were 214 gpm with a 26-psi nozzle pressure. For the two-inch, the numbers were 244 gpm with a 34-psi nozzle pressure. These streams were a little shy on reach with a total reach of about 35 feet, however they were definately capable of an interior attack in a compartmentized area such as a hotel room. It’s important to understand that these flows were taken at the roof, which is a worst-case senerio for pressure loss in the system. The lower you go in the building the higher the flow and nozzle pressure will be.

Not all standpipe outlets are user-friendly regarding connecting hose and gated wye appliances to them. Because of this, a short 15 foot section of either 2 ½-  or three-inch hose should be used to connect the high-rise pack to the standpipe outlet.

2 ½- x 2 ½-Inch Gated Wye
A 2 ½- x 2 ½-inch gated wye should be connected to the end of the short section of hose leading from the standpipe to allow two handlines to be connected from one standpipe outlet. Flow tests at the same structure gave us a flow of 238 gpm each from two 2 ½-inch handlines 150 feet long with 1 1/8-inch smooth bore tips.

2½-inch Inline Pressure Gauge
The 2 ½-inch pressure gauge is connected between the gated wye and the short section of hose leading off the standpipe outlet.The purpose of the inline pressure gauge is twofold. Part of the high-rise deployment procedure requires a flow test of the handline before commencing with the fire attack to determine if the required handline pressures can be met from the system which, in turn, will help decide what size line can be used. The other thing the inline pressure gauge can do is help to dial in the required pressures for the handline. For example, let’s say you’re using 1 ¾-inch hose, and the required pressure for that line to flow 185 gpm with the 15/16-inch smooth bore is 105 psi. This can be noted with a label on the side of the gauge body so if an adjustment is needed at the standpipe, a firefighter simply adjusts the standpipe outlet valve to the required pressure. 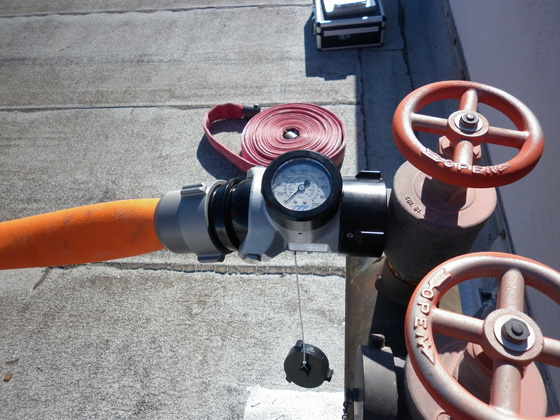 Task Force Tips inline 2½-inch pressure gauge at the standpipe outlet. Note that the elbo at the outlet of the gauge has an adjustable angle.

I hope the information in this article has been helpful in providing a better understanding of what is involved with water delivery in a high-rise fire protection system. Basic decisions in the sizeup on the fire floor are crucial in making the correct choice for the handline to be used. Remember there is more than one way to skin a cat, so if you agree with the information provided in this article but feel a need to tweak it for your department’s operations, by all means make the changes so you will have a system that works best for you.

PAUL SHAPIRO is director of Fire Flow Technology. He is a nationally recognized instructor on large-flow water delivery. He is also a retired engineer from the Las Vegas (NV) Fire Department. He has authored numerous articles for fire trade magazines. He has been in the fire service since 1981, is author of Layin’ the Big Lines, and produced the first in a series of videos on large-flow water delivery.