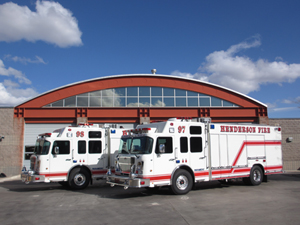 The Henderson (NV) Fire Department has modified its longstanding preference for side-mount pumpers and chosen to purchase a matching pair of Rosenbauer rear-mount pumpers. 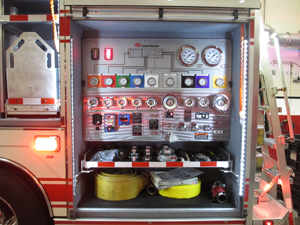 Greg Larson, a Henderson Fire Department engineer and chair of the equipment specification committee, says the department was looking for a change in its fleet—a different design that incorporated a number of innovations that he had observed in 2010 at Interschutz, the German firefighting convention held in Hanover, Germany.

“We saw a lot of innovations on Rosenbauer‘s vehicles and asked if they could incorporate some of them into their U.S.-built pumpers,” Larson says. “Our rigs are pretty jam-packed right now, so we wanted to design new pumpers that we were sure had enough space to carry all our equipment. Rosenbauer was successful in helping us come up with a design that allowed us to carry everything we wanted and still have space left over.” 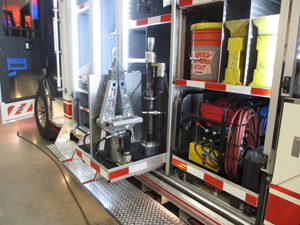 Larson notes that the equipment specification committee set a goal to put equipment that is used frequently or regularly down low in the compartments of the two Rosenbauer pumpers so firefighters have easy access to it. “We have a 20-inch raised roof cabs on the vehicles and very tall bodies, so Rosenbauer installed their fold-down Safe Steps to allow access to the equipment that’s in the upper compartments,” Larson observes. “We also have equipment on the roofs of the pumpers—Class B foam; shovels; a big street key for shutting of hydrants; extra nozzles for the deck gun; salvage equipment; and a Little Giant ladder, which we couldn’t get into a compartment because of its configuration.”

The pumpers each carry a Task Force Tips Crossfire 1,250-gpm deck gun, two 200-foot crosslays and one 300-foot crosslay, all with 1¾-inch hose; 800 feet of five-inch large diameter hose; and a dead load of three-inch hose.

Each vehicle has a wheelbase of 199 inches, an overall length of 33 feet, 10 inches; an overall height of 11 feet, five inches; and a gross vehicle weight registered (GVWR) of 47,000 pounds. 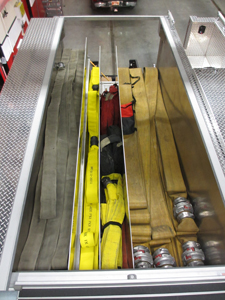 Henderson wanted to make a change in the Rosenbauer pumpers so firefighters didn’t have to share space in the cab with EMS equipment, so Rosenbauer designed a transverse EMS compartment immediately behind the crew cab, says Todd McBride, Rosenbauer’s apparatus specialist. “The transverse compartment holds backboards and a Stokes basket, and has sliding trays that hold their EMS medical bags and equipment,” McBride points out. “The compartment has hidden lock switches just inside the cab’s doors that a crew member hits to unlock the compartment to take the equipment needed, and then the compartment automatically locks itself 30 seconds after the compartment door is closed.”

“We anticipate the Green Star technology will save us in fuel used and keep the vehicles’ maintenance costs down because the vehicles won’t be idling as much on their main engines,” Larson notes.

Larson says his department mechanics are impressed with the smaller physical size, yet easier access to the rear mount pumps. “There are three access points—from the rear with swing-out panels, the left side with a hinged panel and the right side with a removable one,” Larson points out. “And, we like the rear mount pumps because of the extra compartment space we got by using them. We gained a transverse and all full-depth compartments, so we have a total of 313 cubic feet of compartment space.”