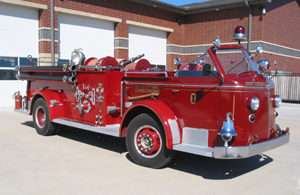 For the first time in 40 years, I no longer own a fire truck. On October 23, 2013, Glen Mears, Jr., a Houston, Texas, firefighter, became the new owner and custodian of my 1953 American LaFrance 700-series open cab pumper.

Readers of Fire Apparatus & Emergency Equipment may recall an earlier feature when I asked if it was time to consider parting with a fire truck that had been a part of my life for nearly 25 years. I now know that the answer is, “Yes!”

After that feature ran I received several calls and e-mail replies. Some had an interest in obtaining the rig, while others encouraged me to continue to enjoy the vintage ex-Carbondale, IL, pumper. None of the offers to obtain the rig were very serious.

Summer passed. The rig made an appearance in the West Peoria Lions Club July 4 Parade. It also participated at the 75th anniversary event at the Creve Coeur (IL) Fire Department in August. The next event was a September Morton (IL) Pumpkin Festival Parade where the rig transported a group of Team Cheer cheerleaders. At all three events, the rig had a small “for sale” sign in the corner of the windshield. The sign did bring some good interest. The Morton parade even resulted in a demonstration ride for a Spring Bay (IL) area resident and fire department member that was very interested in being the new owner. That proved to not be the right time for him. 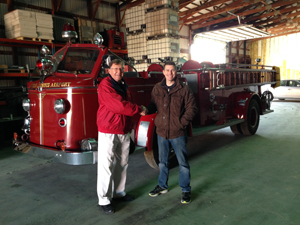 The same day I received the news from Spring Bay, I received an e-mail from Mear. He wanted to know if the ’53 American LaFrance was still for sale! A friend had sent along a posting from Pat Holohan’s Web site that was nearly two years old. Mears thought my rig might be just the one he was looking for. A series of e-mails with pictures resulted in Mears flying up with two of his friends to check out the rig. This was sounding serious!

Monday October 21 was the agreed on date with an arrival at 3:00 P.M. That morning brought a very disturbing e-mail advising that the men had missed their flight! Now, how could that happen? Had the deal gone sour? A later explanation was long lines for TSA inspection. Their baggage made it, but they didn’t! The good news was that everything was rescheduled for one day later. Late October weather in Illinois can be interesting. Although the Monday was a nice weather day, Tuesday brought an all-day rain. It also brought the Texas visitors and they were ready to check out the rig.

The storage shed in nearby Morton, IL has plenty of room and Mears and his friends were soon all over and under the rig. Mears liked what he saw. They were very interested in the pump and the pumping operation, and that became a focus. It had been some time since the 750-gpm pump had been operated, and the cable control for change-over from drive to pump proved balky due to stiffness. It took a quick visit from my friend Mark Stecher from Global Emergency Products, in Washington, IL, to get everything working correctly. The day ended with a plan that the next day would be a better weather day and there should be an opportunity to get the rig out for a test run. Vintage fire trucks are not that keen on being out in the rain—at least the ones I know. 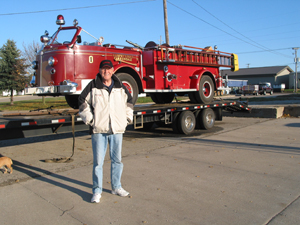 Wednesday morning brought clear skies and cold temperatures. My Texas guests quickly took advantage of some old turnout coats that were on the rig. For the next hour we toured around Morton. The rig ran like a 60-year-old champ! After a quick review of a very tight shift pattern, Mears took over as the driver and did a nice job finding third gear. As I sat in the officer’s seat, I observed three kids in a candy store as they drove or rode in the LaFrance. I knew we were close to a deal! As we returned to the storage area, Mears allowed that I should put the rig back in the barn for one last time. At that point, the three Houston guys jumped off and headed for the tail board. They all wanted that now rare ride. We took the long way in, making a nice loop in the Morton neighborhood. Of course we had to hit the Federal Q and turn on all the lights as we hit the drive into the building. Then the deal was done!

The following Sunday, Mears graciously agreed that I could get his rig out for a few last rides around Morton. Family and friends joined in on a beautiful fall day to enjoy riding and capping off 25-years of memories.

Thursday November 7 was moving day. Scott Weaver, a fellow HOIFEC member was Mears’s choice to transport the rig to Katy, Texas. Scott and I got the rig loaded with no problems. The goodbyes were quick, and soon Scott was off for Texas with my pride and joy.

Looking at the LaFrance sitting on the trailer, ready for transport, the rig appeared older in the bright morning sun. Perhaps that was because of the older eyes that were watching. I know that when it gets to Mears in Texas, his much younger eyes will see a great 60-year old gem of a fire engine—his to admire, enjoy, and preserve.