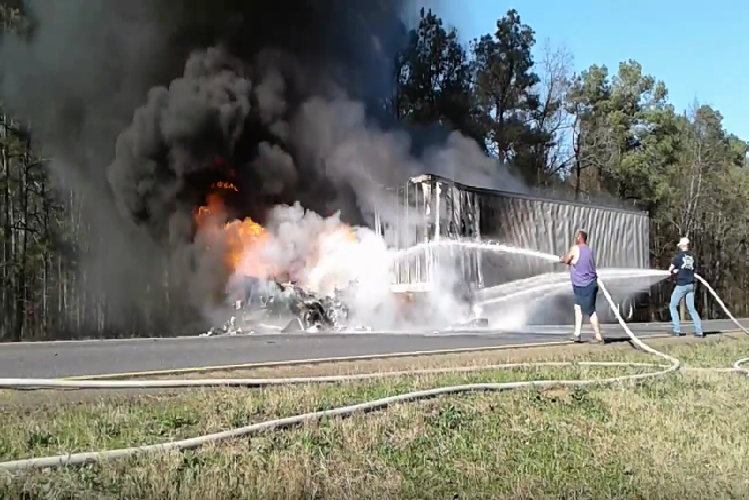 We take a look at a video of a vehicle fire and ask you to consider more than what is obviously missing.

Although shocking in terms of blatant disregard for the use of proper personal protective equipment (PPE), this video gives me much more holistic perspective, even though I may be wrong; however, I’d like to discuss some things that could perhaps have contributed to the events that transpired on the day this video was taken:

1) The department is obviously a volunteer organization. The tractor-trailer fire occurred during the day and these firefighters were available during normal working hours to respond to a fire on the freeway. What’s the availability of the members in your volunteer fire department? As volunteer firefighter numbers decline, what are our fire departments doing to recruit and retain volunteers? We should cherish the ones who can respond during normal business hours and late at night and aren’t the ones “cherry-picking” the calls they show up to. Equipment and PPE are so good nowadays, that the greatest challenge seems to be having the bodies around to use them. Hooray for these guys who were around to put out a large semi fire during the day; however…

2) What is the condition and status of their equipment and PPE? The apparatus in the video is vintage in most respects. NFPA 1901 requires frontline apparatus to be serviceable as a frontline piece for ten years. This ol’ Mack pumper in the video looks to me like it’s the first one out the door and pumps like a champ; and the apparatus operator seemed very capable of pumping it as he got water, quick. Hooray for trained and able apparatus operators; however…

3) Who’s getting the grant money to buy new apparatus and PPE? And does this department have anyone able and willing to submit an Assistance to Firefighter’s Grant (AFG) to replace “Ol’ Trusty?” The AFG requires departments write and submit their own grants. Have you ever filled-out a grant application? It’s tedious for a reason, and takes patience and creativity. Do you have anyone in your department that loves to spend hours writing these things? Who does?!? Moreover, the AFG was established so that we see less vintage apparatus and PPE in videos. Perhaps we should reevaluate the dollars allocated to departments until see less of what’s in this video. I’d rather see these guys in newer rigs and PPE as much as anyone else than a new ‘center’ or project being developed to research what everyone else is already doing, or has done. Hooray for available dollars to fund new equipment; however…

4) If we are issued equipment and PPE, then we have use it – it’s the least we can do after our administrators get us what we’ve been begging for or lamenting in this video. But let’s face it, the elephant in this video is obviously the lack of PPE use. If these members had it with them and disregarded it for this incident, or knowingly left it back at the firehouse, then shame on them. To me, this seems like the only winning piece missing in this video, as we see capable and aggressive firefighters stretching operable hose off of an operable pumper. But before we cast the first stone, make sure that we know if these guys even have their own set of PPE (not shared as is the case in many places; seriously); are the only ones we can depend on to be there during the day when driving through at 1pm and needing the fire department; and that you (have) wear each and every piece of PPE that you are issued at vehicle fires or other emergencies. Until then, hooray for PPE compliance and our dedicated volunteers!

It is what it is, as the saying goes. Had no one videotaped the incident and posted it to YouTube, or to Facebook for that matter, the fire would have likely been extinguished without incident (although the overhaul part would be highly skeptical) and none of would be any the wiser. That should be alarming.

The reaction to the video is somewhat expected and ranges from the typical rant about PPE to the lambasting of all volunteer firefighters in the state of Arkansas.  In between there are calls for firing, charges from OSHA and confessionals from some who have ‘been there, done that’ or are members of departments that are hurting for the basic materials. That is the one that should bother all of us.

‘Doing what they can to save others or help someone in their time of need’ is becoming a worn-out excuse for the 21st century fire service. While it can be used to help exemplify the volunteer or service spirit, it simply cannot be used as an excuse for what can appear to be blatant disregard for proper, basis safety on the fireground.  Likewise, we cannot allow such incidents to be the cause for the very first alarm that a fire department is lacking quality basic equipment.

We really don’t need specifics from the video since these two conclusions from watching it are firm:

2.       The firefighters did not bring or chose not to wear their PPE

Anything else is rhetorical. For the first item, we must ask ourselves what can we be doing nationally, among our national organizations, to make sure America’s firefighters are getting the gear they need. For the second, we must ask if our training and discussions on the exhibit floor level are ignoring this problem.  If you have it, and just don’t wear it, that is a leadership, management and culture problem. But if you don’t have it, well what do we do to help you?

In a time when we have organizations sending gear and apparatus to other countries, when you can turn on the news and see a firefighter in Kabul, donned in good PPE, washing down the scene of a car bombing, the collective fire service needs to use this video and others like it to remind the rest of America that average Joe volunteer and his department need help too. While we can throw grants and gear donations at the problem, it does not help increase awareness that our volunteer fire service continues to struggle and not just with staffing.

Nearly every day we are inundated via the internet of reminders to wash our hoods, check your brother for PTSD, and your sister to make sure she’s not being sexually harassed, and they are based on good intentions. However, we need to be continually reminded that while some volunteer departments can get an award for improved data results based on getting cardiac patients to the STEMI lab, or for getting a grant to purchase a cancer detection canine, there are firefighters today responding to calls for help in their communities that are either lacking the basic equipment or have done the best they can without it that their concern for safety has become subdued to the point of irrelevance.

‘Doing what they can’ is commendable but it should never be an excuse for ignorance.