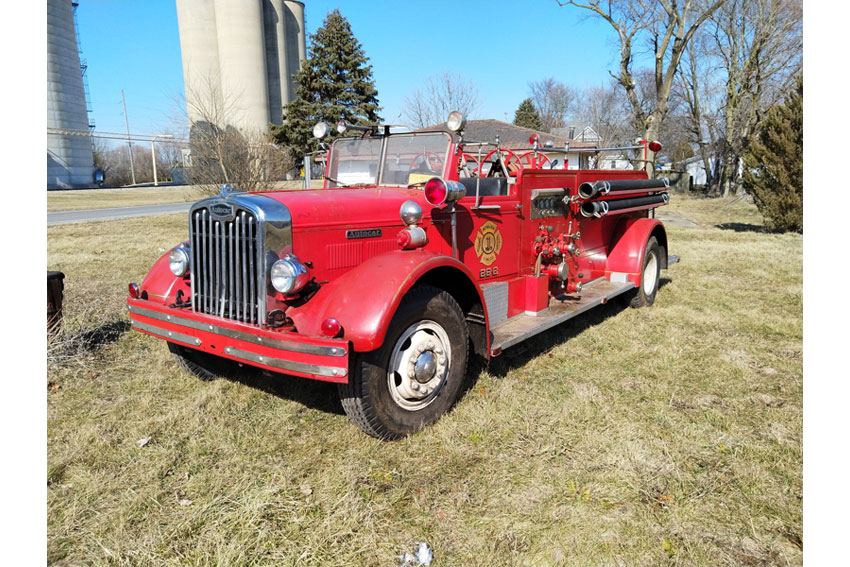 In the mid 1990s, Tom Cunningham answered his front door on Thanksgiving weekend in Wheeling, West Virginia to find his brother Bob Cunningham stopping by. It was not unusual to have brother Bob stop by from his place in Champaign, Illinois. What was unusual was to see the vehicle Bob was driving parked on the curb—a 1950s-era Autocar open cab fire engine! Bob was on his way home from the suburbs of Philadelphia, Pennsylvania, with his new purchase.

Bob had driven out to the Philadelphia area with a friend with the intent to purchase an Autocar truck from a private collector. He had been successful in the purchase, and all he had to do was get the truck back to Illinois. Not a problem as the two headed west—one in a chase car and the other driving the open cab fire engine. Remember—it was a thousand-mile trip, it was November, and the truck was an open cab model Autocar. Much of the trip across Pennsylvania had been in the rain! This was the beginning of the story of the 1950s era Autocar fire; the story is ongoing to the present.

Tom shares his brother Bob’s story as he is now his Estate Administrator. Bob passed away in December 2017 at the age of 70 in Champaign. Bob was a machinist by trade. He had a long interest in anything fire-service-related. He had been a volunteer firefighter at the Bethlehem (WV) Volunteer Fire Department in his high school days. It was during that time that Bob came across a 1950s-era Autocar tractor that was being scrapped out. Somehow that brand of truck became a favorite. Many years later, a friend pointed out to Bob that an early 1950’s Autocar fire truck was being offered for sale in the Philadelphia area. The fact that the truck was not only an Autocar but also a fire truck got Bob heading east ready to buy.

The Autocar-U.S. Fire Apparatus pumper had served a department at Atglen, Pennsylvania, a small community near Philadelphia. A 1950 Autocar chassis that was built in Ardmore, Pennsylvania, was outfitted by U.S. Fire Apparatus in 1952 at its Wilmington, Delaware, factory as an open cab pumper. By the mid 1990s the pumper had been sold to a private collector that in turn had put the rig up for sale. What an adventure unfolded following the purchase and the trip back to Illinois. Bob would often relate that during the entire trip to Illinois the only item that failed was a fan belt that was easily replaced. He also got plenty of favorable attention from passing semi truck drivers as he drove along in the rain.

Tom does not know very much about what the truck’s role was in brother Bob’s life over the next 20 years. He was not even sure that Bob still owned the truck. Bob was a confirmed bachelor. Another of his interests was collecting toys, including several toy fire trucks. Bob’s death in 2017 and Tom becoming the Estate Administrator brought everything into focus. Indeed, Bob still had the Autocar fire truck and a large toy collection in addition to a large selection of machine shop tools. The toys would be sold using several auctions. The fire engine was a larger issue.

Tom knew that the fire engine ran well when it made the trip west to Illinois. What was unknown is what was done with the truck since that time. Was it in area parades? Did local fire departments include it in various fire service events? Where was the truck? Was it stored inside, or had it been put outside to deteriorate? It took considerable research to locate the rig. It was found in the small community of Ludlow, Illinois, in the Champaign area in a building that had been a machine shop. The truck had various tools around it, indicating that Bob was in the process of doing some work on the rig. The truck was not running. Further, there was no title or bill of sale. What to do!

One of the first decisions to be made was should Tom try to sell the truck in “as is” condition or would it be better to have the truck running. The choice was to get the truck running. The State of Illinois worked with Tom to provide a good state title in the name of the estate. Obtaining the title was a multistep process. That was when I met Tom and was able to assist in the process. Brad Strebeck, a Paxton, Illinois, auctioneer, knew of a good mechanic in Gibson City, Eric Lundquist. Eric agreed to work on the Autocar and had the rig towed to his shop in Gibson City where he could work on it in some spare time. Brad and Eric were a great help to Tom as he was a seven-hour drive away from the area. Eric has rewired and rebuilt the starting circuit, rebuilt the carburetor, added a new electric fuel pump, repaired the air brakes, and added a 12-gallon external fuel tank. The truck is now in running order,

Here is what we know about the rig. The Autocar model is FP-5060 with cab FEA 2046. The engine is an Autocar501 gas engine with magneto and distributor. Actual mileage is 26,029. The air horn, Sterling Sirenlite, and most lights all work. The centrifugal pump is Type HP2LUHD 2-3.5. Tom is not sure if the pump works.

This Web feature is rather different as it is a work in process. The next chapter is yet to come. Tom is currently offering the rig for sale. He has gone the extra mile to be sure the truck is in running order. He plans to advertise the pumper in the national SPAAMFAA classifieds. He is asking a modest $6,500.00 OBO. While Tom is not on site, his mechanic can answer any questions. You can reach Tom at (304) 280-3992 or email at: attytomc@outlook.com

While I have not met Tom personally, through several conversations I appreciate what he is doing to handle his brother’s final affairs and at the same time offer a vintage piece of fire apparatus that is now back in running order. A feature like this gives many of us who own vintage apparatus pause as to what plans we have for our rigs on down the road.