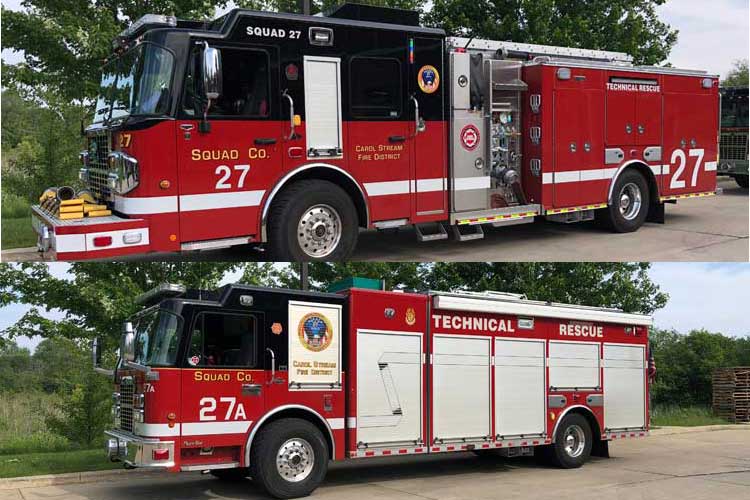 In the 1940s, Gene Morris started building trucks at the Ashland Oil Company in Kentucky. He spent six years working there until he returned to his hometown, Alexis, Illinois, where he worked in a local welding shop repairing trucks. In 1947, Alexis Fire Equipment was founded, and four men would be fabricating three to four units at a time in a shop. At that time, these rigs were marketed in the rural Illinois and Iowa areas. The small shop and newly formed company were very employee oriented with a lot of pride and workmanship, while their products reflected quality craftsmanship. Today, Alexis employs over 75 engineers, craftsman, and mechanics. Its small capacity production has increased tremendously while operating out of a modern 55,000-square-foot building. Alexis has expanded its product lines to custom built engines, aerial ladders, tankers, and rescue apparatus. It also creates specialized law enforcement vehicles, fire/rescue watercraft and for those customers not interested in a complete custom build, it has an exclusive line of specialty vehicles: Response 1, Vision, and Engine 1 series apparatus. In addition to these units, the company recently joined forces with AEV/McCoy Miller and has stepped into the ambulance market. Alexis also does its fair share of remounting apparatus, collision repair, and also offers parts and servicing of vehicles. With all these services offered, it certainly makes Alexis a dynamic and growing competitor in the fire industry.

Carol Stream, Illinois, is a village in DuPage County and a suburb of Chicago sitting about 30 miles west of the city. Its name is derived from a man who was buying up parcels of property, and when it came time to form a town, he named it after his daughter—despite folklore that it was named after a stream that runs through the area. Today, the area is a typical suburban place with a mixture of all types of single-family homes, townhouses, condominiums, apartment buildings, shopping areas, large commercial warehouses, and industrial facilities.  The Carol Stream Fire District has protected the area since its inception in 1947. In that year, three local residents who saw the need for fire protection took second mortgages on their homes to buy a 1947 Ford fire engine. Currently, the department covers approximately 16 square miles with a population of about 46,000 people out of three fire stations. The members are firefighters/paramedics and work a 24/48 shift schedule.

The department’s Squad 27 operates very uniquely with a two-piece company: a rescue engine and support vehicle both built by Alexis on Spartan chassis. Squad 27’s engine operates a 2018 custom side-control pumper with a Spartan Gladiator ELFD chassis with a 10-inch raised-roof cab with seating for four, three being SCBA seats. The unit has an overall height of 10 feet 9 inches, and its overall length is 36 feet 10 inches with a 228-inch wheelbase. It is painted black over red on the cab, and the rear body is completely red. There is a white reflective stripe that runs along the lower portion of the cab and onto the lower portion of the body. The front bumper extension also has this white striping and is equipped with a 12,000-pound winch, a center hose storage trough, and a recessed tool box storage compartment. On the rear side compartment doors, there is large “27” numerical reflective signage as well as on the rear of the apparatus. Running along the base of the body on the rub rails is red and green safety striping with Alexis printed in the green portions. The rear of the apparatus also sports red and black safety chevrons, with the red and yellow high visibility reflective striping on the ladder bracket.

The rig is powered by a Cummins X15 505-hp engine with an Allison 4000 EVS automatic transmission. The body is heavy-duty aluminum with a galvanized steel subframe. The majority of compartment doors are hemmed pan style, although the cab and rear step compartment have roll-up doors. Inside the crew cab are specialized EMS equipment cabinets that offer storage space where supplies can be secured. The rig has a 750-gallon polypropylene tank and Hale Qmax-XS 1,500-gpm pump. It has five 3-inch discharges, two on each side of the pump panel and one on the rear. It has two 4-inch discharges, one on the right side of the pump and one over the pump for the deck gun; which is an Elkhart Vulcan Tiller Bar monitor with TFT Extend-a gun.  There are also two Mattydale crosslay preconnects with 1¾-inch and 2½-inch hose. The body of the rig has a Zico hydraulic ladder rack with one suction hose storage space and three pike pole storage tubes. There are four upper storage compartments that firefighters can access via a ladder on the back of the apparatus. The rig also has two tie-off points, one off each side, which also has electrical connections for their winch. For safety, the rig is equipped with a Night Scan Chief light tower with four Whelen 150-watt LED lights. Additional lighting includes Whelen LED warning lights and scene lighting packages. The rig also has an Audiovox backup camera system with a 7-inch color monitor to assist with backing up. There is a custom transverse storage compartment on the rig for the company’s Stokes basket. The unit also has a Harrison MAS 10-kW hydraulic generator for providing electrical power.

The left rear compartment has been meticulously laid out by the members on the Squad. It is basically a tool box and equipment compartment allowing the members to to retrieve various pieces of equipment rapidly. In addition the tool boxes are attached to a hand truck so the whole kit can be brought to an emergency scene. On the left side of the compartment are tool boxes that hold an assortment of drills, grinders, man-in-machine kit (Dremel tool, angle grinder, hand tools, and shielding), extra blades and bits, and other forcible entry equipment. An area between shelves allows the company to store and charge the cordless tools’ batteries. The 10,000-pound Warn winch is stored on the right side of the compartment. It can be attached to the rear or either side of the rig. Stored vertically to the left of the winch are two Paratech air shores (for throwing a quick T-shore), and on the right side are a flat shovel and broom. The upper shelf on the right side has a DeWalt portable band saw and attachments for structural shoring. The middle shelf has air hoses on it for use with the air bags, which are stored vertically with the controls right below on the lower shelf.

To complement this rescue compartment, the opposite side’s rear is home to Squad 27’s HURST eDRAULIC tools. The left-hand side lower shelf has a cordless jaws and cutter while a cordless reciprocal saw is mounted off the floor of the compartment in a protective sleeve. On the next upper shelf, there are a cordless spreader and another cutter with some spare batteries. On the second shelf down from the top are hydraulic hoses and older HURST tools, cordless rams, and various attachments for the tools. On the top shelf are the ratchet straps for the air struts and cap and base end attachments. The right-hand side of the compartment has vertical storage for four Paratech air shores (roadway extrication kit), pickets and Hi-Lift jacks. Plus, there is a “L” channel rocker panel support bracket stored on the floor in this area.

When you look at the layout of both of Squad 27’s apparatus you can surely see that duty, pride, and tradition exist in the company and in the department.

MICHAEL N. CIAMPO is a 33-year veteran of the fire service and a lieutenant in the Fire Department of New York. Previously, he served with the District of Columbia Fire Department. He has a bachelor’s degree in fire science from John Jay College of Criminal Justice in New York City. He is the lead instructor for the FDIC Truck Essentials H.O.T. program. He wrote the Ladders and Ventilation chapters for Fire Engineering’s Handbook for Firefighter I and II (Fire Engineering, 2009) and the Bread and Butter Portable Ladders DVD and is featured in “Training Minutes” truck company videos on www.FireEngineering.com. He also writes the back page column ON FIRE in Fire Engineering.

Out of My Mind: Trying to Make a Difference