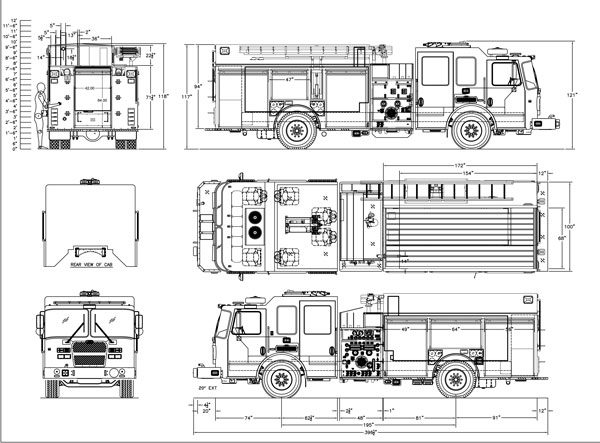 The robust American economy has been reflected in new fire apparatus sales. Although it appears business is good for the fire apparatus manufacturers, most of them are reluctant to go on the record and say what their annual sales have been or what they expect in the future. They are probably justified in doing so. The Fire Apparatus Manufacturers’ Association (FAMA) collects annual sales data, however, they are for “member use” only. A guess would be there was probably a hair fewer than 5,000 fire apparatus sold last year. Another guess would be about two thirds were on custom cabs and chassis—custom meaning the cab and chassis is manufactured solely for use in the fire service.

Custom Cabs and Chassis
Unlike the rest of the world, many in the American fire service treat custom fire apparatus cabs and chassis with reverence and awe—almost like subjects of art—never to be duplicated, imitated, or copied. Most purchasers were uncompromising in their choice of a chassis manufacturer. Many still are today. Years ago, there were Peter Pirsch houses and Ward La France houses. Blasphemy would have been asking Hahn to build a pumper on a Maxim chassis. Outside of the states, commercial chassis are used for fire apparatus—and in some places, the fire truck itself is considered a utility vehicle.

There are only nine domestic manufacturers of custom fire apparatus chassis, and each also builds a complete line of apparatus. Three of them are owned by one entity, and it is pure speculative if each respective chassis will maintain an individuality or will be morphed into one basic chassis with perhaps the cab only or its fascia being the only distinguishing feature.

Another change that has occurred in the past and might well be happening today is the availability of a custom cab and chassis to those manufacturers (OEMs) that do not build their own. In the past, there were four prominent manufacturers that just built custom cabs and chassis available to any apparatus manufacturer. Two have disappeared altogether, and the other two also build their own complete lines of apparatus. Of those two, one sells to a very limited number of OEMs and one sells to more than three dozen. Interestingly, at least two of today’s well-established custom chassis manufacturers have “on occasion” supplied their cab and chassis to smaller OEMs who have built “similar” apparatus on them.

Dealer Dilemma
Apparatus dealers that represent a chassis manufacturer’s full line have expressed off-the-record angst that they quite often have to compete with smaller OEMs that can sell the same cab and chassis that they do. Especially irritating is the fact most full-line apparatus OEMs will not let their dealers sell another custom chassis besides their own. There may not be the incentive for them to write a set of cab and chassis specifications knowing that a dozen other OEMs have access to it.

Should the chassis manufacturers opt to cut off the smaller OEMs, the marketplace could be in chaos. Many smaller manufacturers and their dealers may be put out of business.

New Chassis Player(s)?
Found online (https://www.statista.com/statistics/245369/class-8-truck-sales-by-manfuacturer/) are statistics of the domestic production of six commercial truck builders of Class 8 trucks that have a higher than 33,000-pound GVWR. In 2018, one of the manufacturers sold 90,860 Class 8 trucks—and that was only just over one-third of all the sales.

If one of those six commercial truck builders opts to enter the custom fire chassis market, it would certainly change the dynamics of the industry—especially if the chassis sales were restricted to apparatus manufacturers that did not build their own.

It may be a farfetched possibility for several reasons. First is the potential total market for custom chassis is probably only in the 3,000- to 4,000-truck range. Second would be the possible success rate in that market, which is already highly competitive. Lastly, in the late 1960s, one commercial truck builder produced a custom chassis for the fire service with an outsourced cab. However, it did not appear the numbers justified the operation and it was discontinued.

Regardless if a new chassis manufacturer enters the market or smaller apparatus manufacturers are denied access to custom chassis, there should be some interesting times ahead.

Knowing When Your Fire Apparatus Has a Suspension Problem