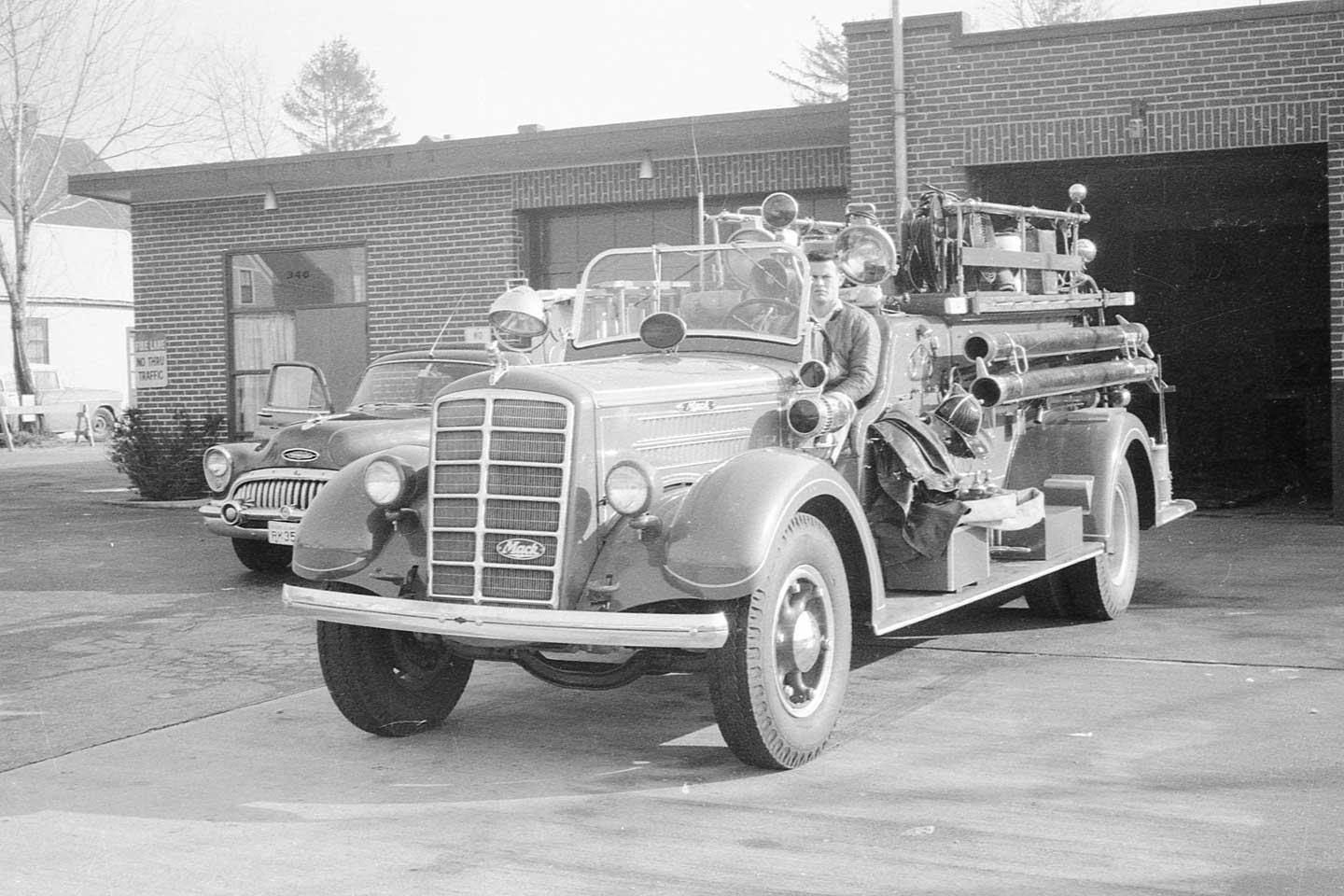 During morning coffee with the Raisin Squad, a couple of the old geezers who were real active in the 1970s (and most are IN their 70s today) were reminiscing about the good old days and some of the “other than normal” activities of an impromptu group called The Roof Crew. They weren’t officially assigned to the ladder truck but most managed to end up on it—probably by design—for the few workers the department had. They even made up their own helmet front insignia which aggravated the hell out of the other members.

On one night job in a half-block long commercial building with apartments on the second floor, the crew was told where to “cut a 4 by 4 and put the big fan in it.” Multiple trips up and down the aerial carting the K-12, a couple axes, pike pole, halligan bar, roof ladder, extension cord, rope, and all 110 pounds of a 24-inch smoke ejector just about wore the troops out. The hole was cut; ceiling punched out; roof ladder laid across it and the fan perched on top and tied off. Only a little smoke came out and they could see a charged 1½-inch line below them. They figured they were ahead of the fire so they took a smoke break sitting on the top of a fire wall extending through the roof looking at the next building over. After a bit one of the guys yelled “Hey—is that smoke ejector fireproof?” Turning around, the smoke ejector was spewing flames out of the vent hole like a tornado. Oops. I don’t know what a 24-inch smoke ejector cost back then, but today they’re almost$3,000. El-Chief-O was not a happy camper.

At another brick commercial, a chief sent the crew sent up to ventilate “exactly 15 feet in right in line with the aerial.” The K-12 wouldn’t start so the guys took turns wailing away with axes. Their arms were ready to fall off. After a long, long time, the chief came storming up the aerial yelling at the crew to stop because the fire was out—another unhappy white coat. The chief and crew couldn’t understand why they couldn’t make the cut. Come to find out the structure was actually two buildings built side-to-side and the guys were trying to open up directly over the brick wall between them. There was no parapet; the wall was flush with the roof line. It was covered with plywood, felt, and multiple coats of asphalt. They never noticed it. Ruined two axes.

At a real nasty “y’all come” wood frame commercial structure fire, two of the Roof Crew riding one of the engines went up an extension ladder with an ax, halligan bar, pike pole, and a handlight. They picked a spot directly above the fire. With the first swing, the axe went south—right through the roof. A big tongue of flame shot out and the roof got real spongy. They dropped everything and bailed. The first thing the chief asked was why they left the equipment on the roof.

One of the engines responded to a mutual-aid residential structure fire, a well-involved room-and-contents fire on the second floor of a 2½-story farmhouse with a two-story “L” addition. The host chief sent the crew up ground ladders (no aerial on scene) to open up the addition’s roof. Although the addition didn’t appear needing it, the guys were taught when you’re on a mutual-aid run you do as you are told—no questions asked. They opened it up and a new guy was using a pike pole to knock down the ceiling. An officer with the roof crew went inside where the vent hole was. No fire—just a little smoke. Each time the pike came through the ceiling, he grabbed it and yanked on it, then pushed it back up and finally pulled it onto the second floor. The newbie was PO’d.

They caught a chimney fire in a wood-burning stove located in a two-story commercial of ordinary construction with a wood roof with and tar and stone covering. Back then, they used a “ball and chain” to unclog built-up creosote. It was about an 8-inch wire ball with bristles and about a 10-pound weight with a real heavy-duty chain. You’d drop it in the chimney flue pipe about three feet or so and scrape it up and down. You had to do it on all four sides if it was a square flue, and you kept doing it until you hit the bottom. Well, when they pulled the chain out it was so damn hot, they dropped it on the roof and set it on fire! You should have heard the hooting and hollering. They had to argue to get a line on the roof to put it out. The guys on the ground thought they were going to use it inside the chimney!

I heard two other stories about using the ball and chain. One was a similar incident where the chain was too hot to handle, and they dropped it, letting the ball and chain free fall 25 feet. It destroyed the smoke shelf and some castings on the wood burning stove. Another that happened many moons ago in another state told of one department putting out a chimney fire with the ball and chain and then having to go back five hours later for a fully involved structure fire. Supposedly, the insurance investigator said the fire department must have loosened/dislodged or broke one of the flue tiles. I heard it was the last time the ball and chain was used.