Previously, I mentioned giving my father’s take on fire alarm boxes (aka Gamewell’s). Right around his 100th birthday, my daughter asked him how the fire trucks and companies could communicate with each other before two-way radios. To set the scenario, he lived in a 36 square mile town with numerous villages and seven volunteer fire companies. Before WWII, the police dispatched the companies by telephoning selected residences and businesses near each fire station where hopefully someone would answer that could trip the local siren. 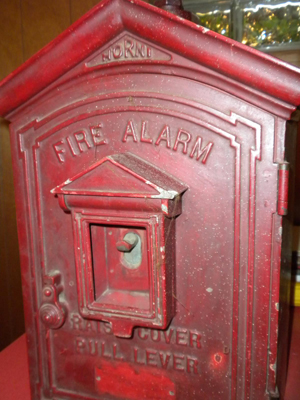 Photo 1: In doing research to corroborate dad’s story, I found a street box made by “Horni”. They produced boxes in the ‘30s, 40’s and 50’s. On a Gamewell box, you pulled the cover down to pull the hook. On the Horni, you had to raise the cover to pull the hook.

His response as best as I can remember—without the cuss words: “Before the Gamewell’s (1930s), you’d send someone to the nearest house with a telephone. Sometimes, you had to hitch a ride to find one. After they got the boxes (1940s), you’d get the key off the engine and look for the nearest box. It could be a hike if you were outside the village. You needed the key to open it. Inside the door was a bunch of signals used to get more help, or send the recall for the box, or to send police or an ambulance or whatever. It was like using Morse Code with a telegraph key. 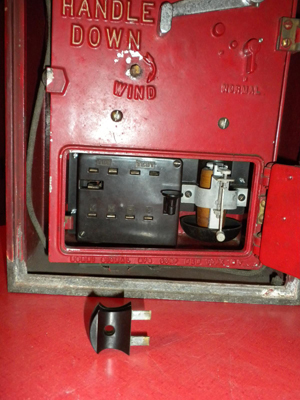 Photo 2: The “lock-out” tab is shown in front of the box. To operate the telegraph key, it had to be inserted in the upper portion of the visible black box labeled TEL. The push down to operate key is in the right center of the black box.

“After you opened the box, there was a small tab with two prongs used to lock-out the box. That by-passed the pull hook so only the telegraph key would work. After locking out the box, you’d always tap the key once to get their attention at the alarm office. After a long pause, you tapped in the signal. When calling a second alarm (2-2) you tapped the key once for the wake-up call. Then you tapped it twice, followed by a short pause then two more taps. Then you’d unlock the box,remove the tab, and ‘pull the hook.’ The box would transmit four rounds. For piddly stuff, like the recall (1-2) or say send an ambulance (8-3) or the gas company (1-6), you tapped in that signal once. Then you had to tap in one round of the box number. It worked pretty good as long as you didn’t send one of the younger excitable fellows or an old timer who forgot his glasses.” He said if that happened, God only knew what they would send—or to where. He said if you could find one, the phone worked best. They became radio-equipped before the Korean War. 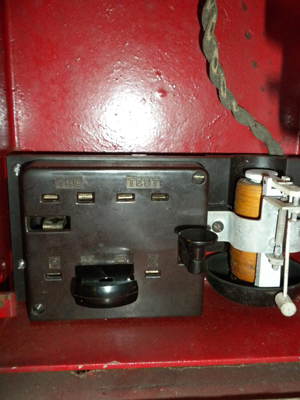 Photo 3: The lock-out tab is in its normal position. This particular box had an internal bell. You had to open two doors to reach the telegraph key.

Leo the Barber
Leo was the barber across the street from my fire station when I first joined as a junior at age 16. Leo didn’t speak English too well and wore a hearing aide. He was a nice older gentleman. The old timers said he was in the war but no junior dared ask which one or on whose side. Leo drove to all the daytime calls, usually at one speed—warp nine. In his heyday, the station ran a 1932 Ahrens Fox ladder and 1938 Mack, 1942 LaFrance, and 1948 International pumpers. He wouldn’t drive anything newer. Mack C-95’s replaced the International in 1961 and the LaFrance in 1964. During grass fire season, they’d park one of the C-95’s outside so Leo could take the ’38 if he was the only driver that showed up.

Leo liked the open-cab LaFrance with the big V12 motor. It flew. It was the second-due engine in the village and first-due into Station 2’s district. In the 1950s, the original Federal Siren Light was replaced by a beacon ray and a Federal Q was mounted on the left fender. Leo couldn’t handle the Q. Whenever he drove the LaFrance, he turned off his hearing aid. Juniors, not allowed to ride in the cabs, were relegated to the tailboard. Many times a bunch of juniors were on the back step heading for a grass fire out in Station 2’s area with Leo up front alone. More than once, the dispatcher put us back in service but Leo never heard him. On those seven- to eight-mile runs out in the boondocks, they’d have a rig from station 2 or a police car flag us down before we got to the scene. It was a laugh a minute.

Another day, Leo hard-wheeled the LaFrance off the apron and the hydrant make-up attached to the 2½-inch supply line fell off. He was flying down Main Street laying line while the crew on the tailboard was crawling all over the ladders and hard sleeves on the sides of the rig, trying to get away from the flailing hose. Leo couldn’t hear them screaming at him. Hose packed flat usually lays straight but when packed in accordion or horseshoe loads it rarely does—especially when going fast. It just whips out of the bed. He dumped all 1,200 feet in about 800 feet. He only hit two parked cars with couplings and nobody got hurt. Leo stopped driving shortly after that. We missed him.

BILL ADAMS is a former fire apparatus salesman, a past chief, and an active member of the East Rochester (NY) Fire Department. He has more than 45 years of experience in the volunteer fire service.