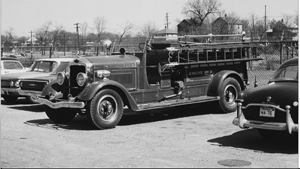 Joe taught driver training and pump ops when I joined in the early 1960s. He was a grouchy old coot but he knew his fire trucks. He probably could tell by the sound of the motor and pump more about what was happening to a rig than today’s on-board computers can. He’d say, “Hear that? Ya hear that kid? Listen. When that relief valve opens you can hear the vibration in the pump.” Not all relief valves had indicator lights so you had to continuously watch the pressure gauge to make adjustments. He taught us to listen in case we didn’t have our eyeballs surgically attached to the gauges. Joe could not accept a pump operator would actually leave the panel—for any reason. But, he said if you couldn’t see the gauges (there were just two—compound and pressure) you had to listen to the pump.

We ran two-stage pumps and the older rigs didn’t have indicator lights to show if the transfer valve was in pressure or capacity. He taught us to keep an eye on the pressure gauge and listen for the “thump” when changing over. He said you’d hear the “flapper” thump just before there was a change in pressure. I can’t remember what it was, but there was a maximum pressure you could be at when changing over. That miserable old man could tell by the clapper’s thump if you exceeded it. The new Macks came with indicator lights on their transfer valves but Joe didn’t trust them. “Listen for the flapper and look at the gauges cause them damn lights don’t always work,” he’d say.

Joe didn’t like anything electrical. He swore up and down that electrically operated priming motors would stick open and manually operated motors wouldn’t. Although engine governors are not electrically operated, Joe said they should have been. He said, “governors just ain’t natural,” and you shouldn’t trust anything to control the motor except the foot pedal in the cab and the mechanical throttle on the pump panel. Probably the only innovative thing he accepted was the beacon ray—although I knew deep down inside he really thought a Mars figure eight light was the best. Most people who drove rigs with open cabs had Mars light fetishes.

Really embarrassing was when you’d be running the pump and he’d walk by and tap you on the shoulder. “The next time you engage the pump, try fifth gear—it’ll work better,” he was known to say. “If you locked the gear shift like I taught you this wouldn’t have happened.” The manual lock would only engage when the floor-mounted transmission shift lever was in the proper pump gear.

And, it never failed that he always managed to appear, sometimes in his own car, when something wasn’t going right. “Whadja do kid? Miss the shift going into the four corners?” Before you could think of what you hoped would be an acceptable excuse, he’d say, “I saw your brake lights come on really hard.” I don’t know how someone could tell how “hard” brake lights came on but it wasn’t a good idea to argue with him.

He taught drivers to downshift before coming to an intersection—fourth to third then third to second on the older rigs and fifth to fourth then fourth to third on the newer rigs with five speed (manual) transmissions. Joe never liked automatic transmissions; he was a double clutcher. But then again, I don’t think he cared much either for apple pie, sunshine, fresh air or sliced bread. He said you didn’t drive the truck with an automatic. The transmission did. He’d say motors were rated for brake horsepower for a reason. “Dammit—use the engine to slow you down. The brakes are just to stop the damn thing.” By the way, how do you use brake horsepower today to slow down a rig with an automatic transmission? I’m afraid to ask. Joe’s ghost may be lurking in the shadows.

He would literally rip you a new one if he caught you steering a rig equipped with that newfangled “powered steering” with just one hand. Besides using both hands, you had to drive with your thumbs up. Joe said when—not if—you stalled the rig trying to downshift going around a corner, the wheel would spin around and break both your thumbs. We didn’t know if it was true or not and most of us were too intimidated to ask him. But, he offered to use sandpaper to wipe any body parts that may need wiping if both our hands were in casts. I still drive my car thumbs-up today.

May Joe rest in peace wherever he is, because we young guys never gave him any when he was here on earth. I wanted to get a “suicide knob” and attach it to Engine 5’s steering wheel; then take a picture of it and send it to him anonymously. I didn’t have the courage. I liked Joe.

BILL ADAMS is a former fire apparatus salesman, a past chief, and an active member of the East Rochester (NY) Fire Department. He has more than 45 years of experience in the volunteer fire service.