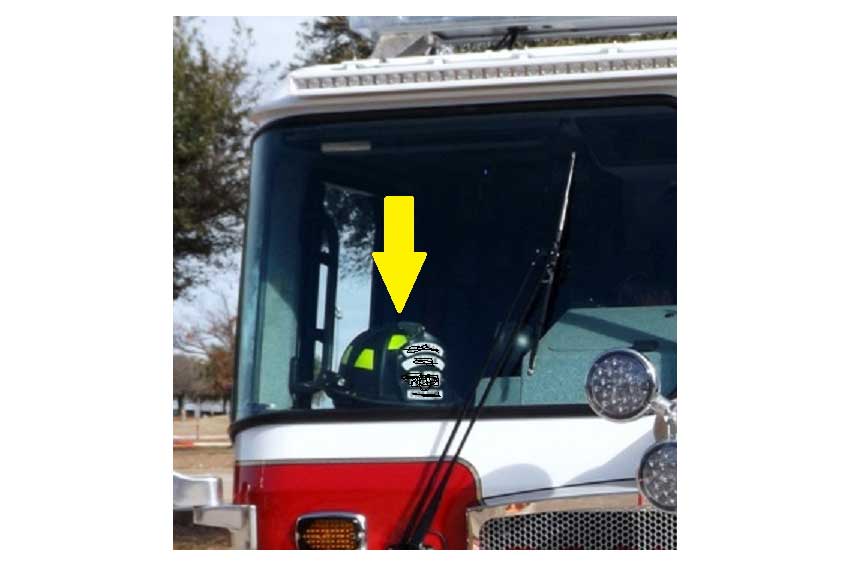 The accompanying photo was forwarded to me by an out-of-town Raisin. It is a recent apparatus delivery—the rig had just been placed in service. So much for adhering to National Fire Protection Association (NFPA) 1901, Standard fior Automotove Fire Apparatus, Chapter 14, sentence 14.1.7.4.2: If helmets are to be stored in the driving or crew compartment, the helmets shall be secured in compliance with 14.1.10.2. Sentence 14.1.7.4* noted: The following statement shall be included in the operator’s manual: “Fire helmets shall not be worn by persons riding in enclosed driving and crew areas. Fire helmets are not designed for crash protection and they will interfere with the protection provided by head rests. The use of seat belts is essential to protecting fire fighters during driving.” I guess that’s just another requirement similar to rear chevron colors that the fire service can ignore if they don’t like it.

The Raisin Squad bloviates over things we can’t control or stuff that doesn’t make much sense. We’re always reminiscing about the bygone days that will never return. Two topics came up during the last couple mornings that are worth mentioning. I relayed a story of a semi-Raisin (a white hair that is still active as a chief officer in a neighboring county) who drove a pumper to a mutual aid call for a working structure fire. He had mentioned how easy it was for him to operate the prepiped deluge set from the top-mount pump panel. His only intent was to bust my stones knowing I don’t like top-mounts.

That started an uproar with the Squad. The consensus was: “He’s a white coat. What the hell is he doing driving one of the rigs?” I relayed their concerns to him and he said on all mutual aid requests the white coats in his department respond to the fire station to ensure the apparatus gets on the road. His answer made sense, although I wouldn’t admit it to him. The Squad kicked his answer around the coffee table and a couple geezers actually weighed in that they agreed with the policy. Then it all went downhill.

One Raisin said he was listening to his scanner when one department was toned out for a structure fire. Three other departments were toned out for automatic mutual assistance—two for pumpers and one for a FAST team (aka Rapid Intervention Company). He said two chiefs from the host department went en route as did two chiefs from one of the mutual companies and one chief each from the other two. The geezer chimed in: “Good grief—six damn white coats on the road and no fire trucks. That’s brilliant.” Another old timer added his two cents: “I hope those stupid vests for Operations, Safety Officer, and Command are fireproof.” What the heck are you talking about? “Cause someone’s gotta pack up and go inside to put the fire out.”

One white hair proclaimed chief officers shouldn’t be wearing white coats when they respond out-of-town. He said that used to be policy in one of the local battalions. I asked a former chief from there who said he doesn’t know if its still policy, but there was no doubt who was in charge at the scene. It has merit. One Raisin told another story about a former neighboring chief who said “There’s only one person in this district that has five horns, and that’s me. Keep your chiefs at home unless they— are responding as part of the crew. Let’m wear a black coat and do some damn work.” Ouch—a crass statement but factual.

Most of us agreed during the day when manpower is lean, everyone including white coats should respond to their station to make sure a rig gets on the road. One said, “Yeah, it could be embarrassing for a couple chiefs to be standing in front of a working house fire with a portable in one hand and their private parts in the other—with no rigs on the road.” He made sense too, but as usual no raisin gives credit to another.