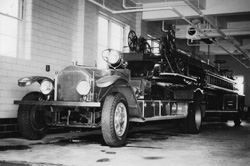 Over morning coffee this winter, the firehouse wrinkle squad weighed in on a TV report describing how several departments had problems with their pumps freezing up on the way to (or at) a working fire. For an hour, we beat to death the pros and cons of running wet or dry pumps. There was no winner. I contacted Todd Rogers, a product manager at Waterous Pumps, who recommended visiting http://www.waterousco.com/service/cold-weather-operations/. It describes the “sanctioned methods” to keep your pump from freezing. If you shovel snow and drive fire trucks, you should read it–regardless of whose pump you use.

Later, I mentioned how my former department used antifreeze in its pumps. Personnel would drain the pump, open any auxiliary drains, and pour automotive antifreeze into the highest 2½-inch discharge. They’d close the drains when the antifreeze began to flow, then engage the pump until the antifreeze mixture came out of the booster line. Then they’d top off the pump with antifreeze and they were in business. Nothing ever froze. Back then, the old timers (the real old ones with only a few teeth, white hair, and needing a bath) were split on their thinking. Old timers still are. Half say it ruins the packing and my half says it doesn’t. They said, “Prove it.”

Jim Darley, national sales manager for Darley’s Fire Pump Division, and Mike Ruthy, the pump division’s chief engineer, did more research than I deserve. Ruthy says, “I checked with our current packing supplier and they said no problem with antifreeze.” Darley says most of the company’s pumps today have mechanical seals as standard, and it had a similar question came up recently about pumps equipped with mechanical seals going to Russia. Ruthy checked with the supplier of the mechanical seals who weighed in: “There are some considerations. We prefer if they can use a mixture of Ethylene Glycol and water. Also, have them use one with no inhibitors in it if possible, as it will contain solids that can get left behind on the seal faces and cause damage. Time over time the Glycol will form acids that will increase the corrosion rate. With Ethylene Glycol we will be under .010 mpy. Flush–please have your customer drain the pump of the antifreeze, flood with water, and use as normal.”

Ruthy says, “Naturally, I can’t comment on other manufacturer’s packing, and we never did any testing on the older braided rope packing that we used back in the 1950s. Sorry I can’t be more helpful.” I couldn’t have asked for any more. All those pump guys are good people–they bailed out my wrinkled old butt.

In speaking of old, I remember my first company getting its original tanker-specifically for grass fires. A battleship grey 1951 “corn binder” (called Navistar today; International Harvester back then) flatbed was “acquired” from the nearby naval air station. Nobody ever asked what “acquired” meant. The unit numbers on the bumper and writing on the doors were sanded off, but you could still read US NAVY on the side. Hamilton Oil donated a 960 gallon tank from a fuel oil truck that was in an accident. The tank, a little dented and scraped up, was strapped to the flatbed. It was painted blue and yellow and said Hamilton on each side. It was eventually painted red. A 250-gpm portable pump was put in the rear compartment where the fuel oil hose reel used to be.

The pump’s discharge had a 2½-inch to 1½-inch reducer with an 1½-inch wye. Somebody cobbled together two fittings from 1½-inch to booster hose thread. The nozzles were those cheap red plastic throwaways you had to twist to turn on and off. Two short lengths of booster hose were just long enough to reach from the pump to the top of the tank where a couple of guys would straddle the manual fill covers. It was a pump-and roll-operation–fun, but tough on the important body parts over rough terrain.

It had a teardrop red light on the cab roof that spun like a top, but the lamp kept burning out. The siren, a real small 6-V something kept burning out too. After they fried the radio, we were only allowed to use a portable. I think the Navy’s voltage was different than the rest of the world. I told the wrinkle squad about the rig. Now I have to go looking for pictures to prove the damn thing really existed. I have to learn not to tell stories.