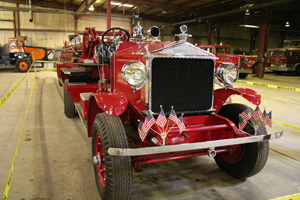 It seems impossible that one person could gather over 400-pieces of vintage fire apparatus into one collection. But, that is the number that Andy Leider, a New York real estate attorney, shared with me this month. As a one-time owner of a couple of vintage rigs, I can only imagine how much of a project it must be to maintain a fleet as large as the one that Leider has, tucked away north of New York City.

The towns of Wallkill and Middletown come into play as the home to Leider’s collection. Like any collection, it all started with the number one. That was in the year 2002. A 1959 Seagrave quint that had served Elmwood Place, Ohio, was an eBay purchase. Leider is also involved in a towing service company. That service had towed out damaged vehicles following the 9/11 tragedy. Many of the vehicles were pieces of fire apparatus from FDNY. Leider felt that owning a vintage piece of apparatus would be his personal memorial to that time in history. Now you know the start of our story.

Vintage fire apparatus buffs have a very good pipeline of knowing who the players are in our hobby through the national group Society for the Preservation & Appreciation of Antique Motor Fire Apparatus In America SPAAMFAA. This organization has served our interest for more than 50 years. Members receive various publications and directories. National SPAAMFAA also holds a winter and a summer meeting. The summer meeting features a muster where apparatus is on display, parades, and then many of the engines are set up to draft water and pump. There is apparatus from the hand-drawn era, to horse-drawn, to early motorized, and on up to rigs from the 1980s. A few years ago, Leider’s name began to quietly spread. There were reports of as many as 200 rigs in his growing collection. Buffs that were regular attendees confirmed the size of the collection and shared that Andy was a regular participant. 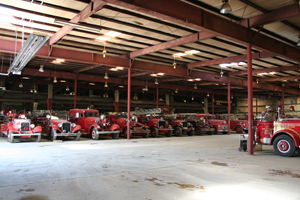 It was time to contact Leider and get the full story to pass on to our readers. After a few conversations with Leider I feel that I can share a bit more of the story, however it may take a couple more years to get the full story.

400 fire trucks! This must be the largest collection assembled by one collector. Although Leider says that is possible, one never knows what other collectors may have tucked away. A big difference may be that Leider is glad to show his collection to interested parties. Currently Leider houses his collection in a large former industrial building complex in Middletown, New York, located approximately 70-miles north-west of New York City. There is usually someone at the complex in April through November, however an advance call to Leider’s office at (845) 609-7020 is suggested. Leider is very close to completing the purchase of an abandoned furniture factory in northwest Pennsylvania. When that happens, he will begin a transfer of up to half his collection to that site. The building that Leider currently uses has value as a rental facility to others, meaning that Leider could store the remaining part of his collection in other scattered sites, pending the completion of a new 30,000-square-foot facility that would serve as a fire museum. The proposed new building would be across the road from the current site. Leider would also build a new shop for ongoing restoration projects. All of this could happen in the next two years. Considering how fast Leider has moved to acquire his large collection of fire apparatus, he will probably achieve all his building goals as well. 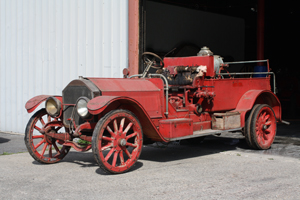 Let’s get back to the 400 fire trucks. What makes and models are they? How old are they? Where did they come from? Do they all run? How much did they cost? These are all the questions I asked Leider, and he was very gracious in answering them all.

Leider advises that the rigs date back to 1915 and come all the way up to the 1980s—with a few rigs even slipping into the 1990s. Every type and many manufacturers of American fire apparatus are represented. Many of the rigs were driven to the site, while others have been trailered in from almost every state in the lower 48. He advises that a battery pack will get 50 to 70 percent of the rigs running. He has paid as much as $60,000 for a rig—a 1927 Ahrens-Fox 65-foot TDA that served Kansas City, Missouri. Many of the rigs have been donated to Andy by fire departments that did not want the rigs to go to the scrap yard.

Apparatus collectors all have an all-time favorite piece of apparatus, and I am no exception. What a great surprise to learn from Leider  that he has the Fairview, New York 1939 Ahrens-Fox 70-foot aerial ladder quint. It is the only quint built by Ahrens-Fox. The rig is featured in the 1971 publication Ahrens-Fox edited by Robert Sams and John F. Sytsma. An October 1939 story in the White Plains Daily Reporter called the rig the “Monster” Fox. The $20,000 rig features a four section aerial ladder, a 1,000-gpm piston pump, 100-gallon booster water tank, and 220 feet of ground ladders. More than 300-people attended the apparatus delivery demonstration. What a gem! This rig has had several owners over the decades and is in need of a fair amount of restoration. I wish Leider the best of luck as he goes ahead with that project as well as possible plans to host the national SPAAMFAA summer convention and muster at his new Middletown, New York fire museum in 2016. This will be a muster we vintage apparatus buffs will not want to miss. 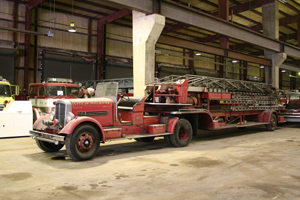 My thanks to Leider for his help and sharing his collection and a special thanks to friend Ron Jeffers for sharing his great pictures.