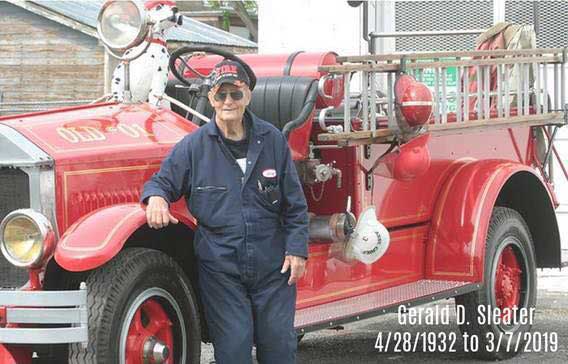 Jerry Sleater served the Fire District #1, Kennewick, Washington for 55 years. He started with the district in 1964 as a volunteer firefighter to later being a district assistant chief and eventually serving as fire commissioner from 1990 to 2019. Fire Station #130 in Kennewick, Washington, is the station where Jerry began his fire service career. Fifty-five years later that station is now home to a 1929 American LaFrance pumper. The rig is a gift from the family of the late Jerry Sleater. Jerry passed away in March 2019.

One of Jerry’s loves was a 1929 American LaFrance pumper that served the small community of Omak, Washington, located near the Okanogan National Forest in northern Washington. Omak used the pumper well into the 1950s and then put the pumper up for sale. It is not known how many owners the pumper had in the following years. By 2008 Jerry learned that the rig was up for sale again. A Washington highway patrolman who owned the rig lost his life in an accident. Jerry was the successful bidder, and soon the rig was ready to be trailered to the Kennewick area.

The pumper was in rough shape. That is when Jerry decided to do a full restoration to bring the pumper back as close to original as possible. The project took the next few years as Jerry researched the rig and searched for missing parts to complete the restoration. Much of the restoration work had to be sourced out, but Jerry supervised the work at all phases. Jerry’s daughter Linda shared that there was one major exception in the restoration. Jerry had the manual transmission replaced with an automatic transmission. An earlier incident on a response to a grain elevator issue resulted in Jerry being injured and the loss of a leg, thus the need for an automatic transmission if Jerry were to be able to drive the rig—and drive the rig he did! By the summer of 2013, Jerry was ready to drive the rig in the local Benton/Franklin County Fair parade. The pumper would be a part of several parades and other events in the Kennewick area in the years that have followed.

Jerry passed away in March 2019 at 86. When his family considered what to do with the fire truck, they offered the rig to Lonnie Click, Chief of Benton County Fire District #1 at Kennewick. While apparatus floor space is at a premium, the chief and members of the fire district were pleased to make room for the vintage rig that meant so much to Jerry and is also a memorial to his 55 years of service to the district. They plan to keep the pumper in top notch repair and make the rig available for local parades and being a part of fire service public relations events in the Kennewick area.

What is your story on a vintage piece of fire apparatus that you or your fire department owns? There are many interesting stories to share about vintage fire trucks. Please feel free to contact Ron Heal at ron.lois224@gmail.com.  Special thanks to FA&EE feature writer Al Petrillo for his lead on this electronic story.