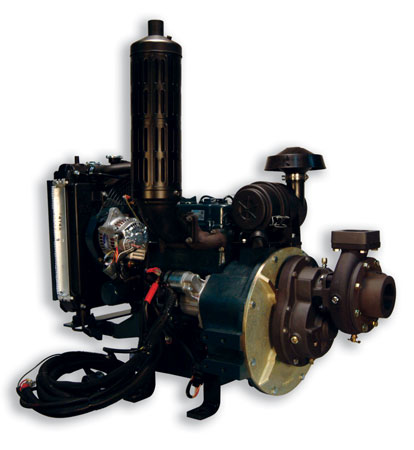 Fighting a wildfire is significantly different than tackling a structure or vehicle fire, which means that while some equipment is similar, much of it is of a specialized nature.

The kinds of equipment wildland firefighters carry on their rigs and on their person when they venture into the brush to extinguish wildfires vary depending on the type of the vehicle carrying it and the space available for the equipment.

Darley points out that many wildland fire agencies and fire departments choose diesel-driven pumps for their wildland rigs so they can use the onboard diesel tank on the vehicle. “It also eliminates the confusion of having two different types of fuel on board,” he observes, “and diesel is a little less explosive than gasoline in a burnover risk.”

Darley recently introduced two new pumps used in wildland vehicles, including the 2-1/2AGE 37V EFI, powered by a Vanguard electronically fuel injected gasoline engine that doesn’t lose power at higher altitudes, and the HSA 250K 59HP, a 250-gpm National Fire Protection Association (NFPA)-compliant pump that Darley says is built into a pump house and used by the BLM. Both models can also be skid-mounted, Darley points out.

In addition, Darley also makes larger two-stage pumps for wildland use, main vehicle pumps from 750 to 1,500 gpm that can pump simultaneously in the second stage at high pressure off the same transmission and produce 100 gpm at 600 pounds per square inch (psi). Popular types include the LSPH 750, 1000, and 1250 versions, as well as the PSRH 1000 to 1500 rear-mount models. Both styles can be power takeoff (PTO)-driven.

Paul Darley, president and chief executive officer, notes that “reliability and durability are the chief attributes of our pumps, coupled with compact design, because space and weight are critical on wildland vehicles.”

Justin Palmer, global applications manager for portable pumps at Hale Products, says Hale makes both engine-mounted wildland pumps as well as special-purpose versions. “Typically, our wildland firefighting pumps are frame-mounted to a metal skid and affixed to the back of a truck,” Palmer says. “Our three most popular wildland versions are the HP75-B18, the HP100-KBD24, and the HPX75-YD9.”

The HP75-B18 is powered by a Briggs & Stratton four-cycle V-twin gasoline engine and gives a maximum flow of 130 to 140 gpm at 350 to 375 psi, Palmer says, calling it a low-flow pump that most wildland fire departments use for high-pressure applications. The HPX100-KBD24 is powered by a Kubota 24-hp liquid-cooled three-cylinder diesel engine that gives 150 to 160 gpm at pressures in the 320- to 360-psi range, he notes, while the HPX75-YD9 is powered by a Yanmar nine-hp single-cylinder diesel engine that puts out 110 gpm at 200 psi.

Hale Products also makes the Fyr Pak, Fyr Flote, and Super Chief wildland special-purpose pumps. The Fyr Pak is an eight-hp two-stroke gasoline powered pump mounted on a backpack frame. It has a pull-start engine and weighs 34 pounds. The Fyr Flote is a 49-pound floating pump that uses the same engine. “You throw it into a water source and it will automatically draft,” Palmer points out. “You can connect a 1½-inch hose to its outlet and get 70 gpm at 185 psi in pressure or 135 gpm at 130 psi in volume.” The Super Chief is a low-pressure four-stroke floating pump with a Briggs & Stratton gasoline engine that moves up to 425 gpm, used chiefly for water transfer and water relay, Palmer says.

Jerry Halpin, vice president of sales and marketing for CET Fire Pumps, says CET wildland pumps powered by gasoline engines in the 11-, 20-, 25-, and 30-hp range are the most popular, along with diesel-engine-powered pumps in the 21- and 25-hp through 48-hp range. “Diesels are usually on slightly bigger vehicles that are tasked to do more than fight brush fires,” Halpin points out. “They might be tasked to supply water or perform other wildland urban interface tasks.”

Halpin notes that all of CET’s pumps are chassis-independent, driven by their own engines. “You can do pump-and-roll with them,” he says, “which is very important in wildland firefighting because you might need to pack up and move very quickly. Also, such pumps tend to be more efficient in terms of cost and in using water. And because they can be mounted externally to the chassis, they can be much easier to service and maintain.”

CET’s most popular wildland pumps are powered by either gasoline or diesel fuel in the 20- to 25-hp range, putting out 300 gpm at up to 150 psi, Halpin says. “There’s more volume but still a significant amount of pressure to handle almost any kind of fire,” he notes. “They can be used in an urban interface area to deal with outbuilding fires. CET’s six- and nine-hp forestry pumps are typically putting out 120 gpm on the high side, with pressures up to 90 psi, and are often used to move water long distances.”

Frederic Lefrancois, vice president of product development for WATERAX, says his company makes the Mark-3 and the BB-4 fire pump series that are tailored to wildland use. “The wildland arena is a very different battlefield,” he says. “Water is scarce, and you have to fight both distance and elevation in bringing water to the fire.” The Waterax Mark-3 uses a two-stroke engine with a four-stage centrifugal pump to produce high pressure, Lefrancois says. “It’s very rugged and weighs less than 60 pounds, so it can be put in a compartment but also is back-packable. The engine is 10-hp and puts out 100 gpm at 385 psi.”

The WATERAX BB-4 uses the same four-stage detachable pump end as the Mark-3 but is coupled to a four-stroke engine “so it runs more quietly and is more reliable, although it’s a bit more bulky and heavier,” Lefrancois says. “The USFS uses it on Type 6 and Type 4 engines, with 18-hp and 23-hp motors that put out 100 gpm at 425 psi.” He adds that the besides the USFS, the BLM and the Canadian Forest Service use the Mark-3 and BB-4 models.

Bob Richardson, president of Mercedes Textiles, says his company makes two classes of fire pumps: a man-portable model and pumps that go onto slip-ons for utility terrain vehicles (UTVs) and all terrain vehicles (ATVs). “The Wick 375 is carried on a backboard and has a typical flow rate maximum of 100 gpm,” Richardson says. “It also will do 50 gpm at 225 psi and can push water over 3,000 feet. A firefighter with a second backboard carries the pump’s suction hose, handline hose, and fuel tank.”

The Wick 100-4H is the company’s mini slip-on for ATVs that have a limited water capacity but need to approach brush fires rapidly. The pump will give 20 gpm at 70 psi, Richardson says, and features a clutch for easier starting of its motor and to stop the flow of water to prevent waste. Larger UTVs might carry the SI-250 pump, he notes, a 50-pound unit that will give more than 200 psi.

For Type 6 wildland vehicles, Mercedes Textiles makes the BN-4200 pump that is skid-mounted and will deliver up to 400 psi. Depending on the elevation where the pump will be used, the company supplies pumps with 13-, 18-, and 23-hp gasoline-driven engines and a 25-hp water cooled diesel.

Lefrancois says that when Waterax designed its high pressure Mark-3 wildland pump, it also designed Hotline forestry hose to handle its higher pressures. “It’s 1½-inch hose that resists pressure well and has abrasion resistance, so it can be used in rugged terrain,” he says. “CAL FIRE uses Hotline hose on its wildland vehicles.”

Toby Mathews, president of Key Fire Hose, says Key Hose makes Type 2 wildland fire hose, which is a lightweight single-jacket hose designed especially for backpack applications. “It’s an all-polyester hose that has a yellow polyurethane coating to give it better abrasion resistance and a polyurethane liner for the waterway,” Mathews says. “The maximum length we make is 100 feet, although some fire departments like their Type 2 forestry hose in 50- and 25-foot lengths.”

Mercedes Textiles developed the Mertex® Lining Process for manufacturing fire hose, Richardson says, which uses a lining material in a molten state that is introduced into the fabric jacket as it is being woven at the loom, eliminating adhesives, glues, and other bonding agents. He notes the process allows Mercedes Textiles to keep friction loss and the weight of the hose low, provide a greater burst safety margin, and eliminate delamination.

Richardson says Mercedes Textiles also makes Firebreak II, a self-protecting hose where tiny amounts of water wick to the hose’s surface to keep it damp. “It’s a capillary action called hydrowicking,” he notes, “and improves resistance to hot embers. The hose comes in one-, 1½-, and 2½-inch sizes, typically in 100-foot lengths.”

Mercedes Textiles also makes Boost Lite booster hose out of a rigid polyester that is only 20 percent of the weight of rubber booster hose but has a 2,000-psi burst rating, Richardson says, and the Fire Boss, a lightweight forestry hose that weighs about 14 pounds per 100 feet coupled. The company also designed the Strangler for wildland firefighting, Richardson adds, which is a clamp used to stop a water flow through a hose when additional lengths need to be coupled onto it for greater reach.