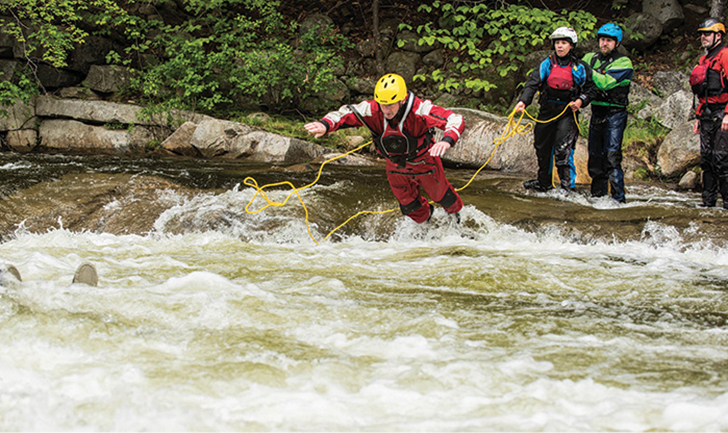 Throw bags, float bags, rescue tethers, reaching devices, floating devices, and small watercraft are some of the equipment available to fire departments and rescue teams for water rescue incidents that run the gamut from flooding scenarios to swift water rescues to calls involving water sources of all kinds.

Don Miller, vice president of Rescue 3 International and Rescue Source, believes that personal flotation devices (PFDs) and drysuits should be considered as the most important equipment a rescuer should use. “Flotation and temperature management are the two main areas of protection for the rescuer,” Miller says. “Wearing a PFD, you want to stay on top of the water and keep your airway clean and still carry a small amount of equipment to the victim. You can do a lot with 20 feet of rope or webbing and a couple of carabiners.”

If a rescuer is planning on making a true contact rescue of a victim, Miller points out, the PFD should have a quick-release belt on it. “When doing a tethered swim, the rope is attached to the PFD instead of a hard tie on the rescuer’s body,” he says. “That way, it allows the rescuer to bail out of the PFD if there’s any trouble.”

When working a water rescue, Miller says, anyone in the warm or hot zone should be prepared for immersion. “A human can go into hypothermia in 70°F water,” he notes. “Rescuers should be wearing a wetsuit at least for immersion in relatively clean water and a dry suit for colder or polluted water. In flood situations, there are a lot of petrochemicals in urban flood water, and in more rural areas, farm runoff pollutes flood waters with fertilizers, weed killers, and animal waste.”

1 Firefighters use a tethered inflatable boat to reach a victim stranded in swift water. (Photos 1-2 courtesy of Dive Rescue International.)

Justin Fox, president and chief executive officer of Dive Rescue International, says his company makes throw bags and rope bags for water rescue and has been doing water rescue training for first responders since 1977, including two levels of swift water rescue and one class on boat handling in swift water and flooding situations. Fox agrees with Miller that PFDs and immersion suits are indispensable equipment for water rescuers. “A wetsuit will keep the rescuer warm by trapping a layer of water in between the body and the suit and the body quickly warms it up,” Fox points out. “However, if the water is contaminated, it’s now trapped inside the suit, so that’s when a dry suit is the better choice because it keeps the entire body dry by air trapped inside the suit. It allows a rescuer to walk in flood waters and rivers and not have chemicals trapped against his skin.”

Steven Noble, deputy chief of operations, health and safety for the Northwest (AZ) Fire District, says Northwest follows the concept of reach, throw, go, using the least invasive technique to reduce the risk to rescuers, depending on the situation. “We have flash flooding in Arizona where the water rises quickly and can die back down quickly, which is very different than standard moving water,” Noble says. “If a victim is secure, we might wait 15 minutes for the water to recede before making the rescue. If we can’t wait, we’ll use a throw bag with a tether line attached so we can pull the victim to shore.”

2 A wade crew of rescuers snatches a victim from swift water and walks him to safety on shore.

3 A Northwest (AZ) Fire District firefighter pulls a simulated victim from a swift water situation after rappelling off a bridge to reach the victim. (Photos 3-4 courtesy of Northwest Fire Department.)

Noble notes that sometimes a wade crew wearing PFDs and carrying rope bags and other equipment will bring a PFD and helmet to a victim and then extricate them to the shore. “We also have inflatable hose capabilities, where if people in the water can get to a bridge, we can drop an inflated 50-foot length of 2½-inch hose that the victim can grab onto and is then cantilevered over to shore,” he says.

“Another option is a boat operation where we build a high line for the boat to move from side to side, but here in the desert there aren’t always trees available to rig a high line,” Noble says. In that case, Northwest Fire uses a flying drone or the EMILY swift water rescue boat drone, which can deliver a PFD and helmet to a stranded victim, and then have the victim hold onto the drone and have it pull the victim back to shore.

EMILY is built by Hydronalix, says Paige Day, director of sales for the company, with a Kevlar® reinforced composite hull. Day says EMILY is 14×14×50 inches, weighs 31 pounds, has a 2.4-kW electric motor, and can run up to 35 miles per hour. “EMILY has an eight-foot perimeter grab rope, easy-grip handles for victims to grab onto and secure themselves, bright LED navigation lights, a long flag on top for easy visibility, and a waterproof two-way VHF marine band radio with remote microphone,” Day says.

Glenn Newell, president of Rescue Tech, says his company focuses on decreasing the time rescuers are in the hot zone. “Any time a rescuer can do a nonentry rescue, the safer the situation,” Newell observes. “We offer the Reach and Rescue Kit, which allows precision access to a victim, whether conscious or unconscious. The pole is made of carbon fiber tubes that float and can be extended more than 20 meters over the water. Rescuers can attach a flotation collar or a body hook onto the end.”

For situations where a victim may be trapped in a vehicle in a flooding event, Mike Canon, vice president of sales for HURST Jaws of Life, says the tools to use are eDraulic WXT watertight extrication tools. “The S788eWXT cutter is totally submersible and operable under water,” Canon says, “as are the SP555eWXT spreader and the R521eWXT ram. A rescuer even can change out the battery under water on any of those models.”

5 The water rescue drone EMILY, made by Hydronalix, has a 2.4-kW electric motor, an eight-foot-perimeter grab rope, easy-grip handles for victims to grab onto, and a waterproof two-way VHF marine band radio with remote microphone. (Photo 5 courtesy of Hydronalix.)

6 A rescuer secured by UltraLine water rescue rope made by Sterling Rope heads into the water to rescue a victim in the left center of the photo. (Photos 6-7 by Joe Klementovich.)

7 A rescuer has a Sterling Rope GrabLine water rescue rope tethered to his PFD prior to entering the water.

Matt Hunt, work market manager for Sterling Rope, says the primary product his company makes for water rescue is a throw line that floats and allows a rescue swimmer or victim to catch and hold. Hunt says Sterling makes WaterLine and GrabLine ropes for water rescue as well as UltraLine, a high-strength rope with Spectra fiber in its core. “It’s the polypropylene in the sheath that makes these ropes buoyant,” Hunt observes. “The UltraLine is available in ¼-inch and 3⁄8-inch sizes, GrabLine is 3⁄8 inch, and WaterLine is available in 5⁄16-, 3⁄8-, 7⁄16-, and ½-inch thicknesses. Our 7⁄16-inch WorkPro static rope also is one that’s a good fit for swift water rescue.”

Hunt notes that Sterling also offers the Big Shot, a slingshot device that throws a two-ounce weight and two-millimeter messenger line up to 300 horizontal feet, and the SherrillTree Big Launcher Kit, a pistol-grip line launcher with a built-in stock that can accurately launch a line 125 feet.

John Evans, sales and marketing director for SMC, says his company makes a swift water pulley for water rescue work. “The swift water pulley has five holes in it that create a place for the water to cavitate so the pulley doesn’t skate on top of the surface but lies just beneath it,” Evans says. “It works well in swift water situations. We also make a full line of stainless steel carabiners, locking, screw gate, and autolock models that are often used in water rescue situations.”

9 For situations where a victim may be trapped in a flooding vehicle, HURST Jaws of Life makes the eDRAULIC WXT watertight extrication tools in cutter, spreader, and ram models. (Photo 9 courtesy of Hurst Jaws of Life.)

10 Lake Assault Boat’s 22-foot RHIB is engineered for fast and nimble fire and rescue response and can operate in as little as 12 to 14 inches of water. (Photo 10 courtesy of Lake Assault Boats.)

Rescue Tech also makes the ResQsled Endurance, an inflatable water rescue craft made from a Hypalon® fabric with 10 rubberized carrying/grab handles. “The slightly upturned end keeps water from coming in or from the craft diving into swift water,” Newell notes, “and a victim can easily be pulled aboard through the wrap round tubes.” Rescue Tech also offers the SRTplus Flexible Stretcher that features a built-in patient harness and footbeds to prevent a victim from sliding out when being lifted.

Kris Walker, director of Oceanid, says his company makes the RDC Rapid Deployment Craft inflatable rescue raft. “It’s 15 feet long and four feet wide, inflates in seconds, and is designed for both hard and soft water rescues,” Walker says. “It paddles and ferries like a canoe, is self-righting, and for swift water situations can be shore controlled by tethers from one or two rescuers instead of being paddled.”

The 22-foot rigid hull inflatable boat (RHIB) from Lake Assault Boats is engineered for fast and nimble fire and rescue response. The lightweight boat is able to operate in as little as 12 to 14 inches of water. It is a fit for departments responding to a wide range of water conditions including flooding. The RHIB’s heavy-duty buoyancy tube is available in three configurations: air-filled, high-density foam, and hybrid air bladder with high-density foam.