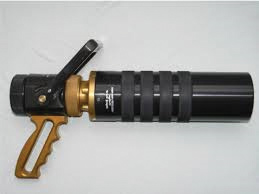 As you know when it comes to extinguishing fires, water is almost exclusively used-with few exceptions. The method of delivery has always been through discharge evolutions made up of hose, appliances, and nozzles. I like to think of the nozzle as an applicator for applying the water for fire extinguishment.

Over the years, there have been several types of nozzles used for firefighting with various results. The Vindicator nozzle developed by First Strike Technologies, although not new, is one of the latest nozzles to enter into the fire service. It is neither a combination nozzle nor a smooth bore nozzle. I’ve heard some people describe it as a large-bore nozzle; however, it varies from a smooth bore in many ways.

The Vindicator nozzle only provides a straight stream. It consists of two parts: the ball valve and the barrel. The ball valve has a 13⁄8-inch waterway with flow capabilities up to 500 gallons per minute (gpm) while the master stream nozzle flows up to 1,000 gpm. Inside the barrel there is a stream shaper and a stream deflector that develops the water into a workable firefighting straight stream, which offers lower nozzle reaction characteristics. The handline barrel portion of the nozzle utilizes 1½-inch couplings; the master stream has 2½-inch couplings. The barrel has air intake ports at the base similar to a foam nozzle designed to introduce air into the fire stream, which creates large droplets of water.

There are four Vindicator nozzle models:

The following flow tests were done by an independent agency to compare the performance capabilities of a Vindicator Heavy Attack nozzle against a 15⁄16-inch smooth bore tip. The tests included flow delivery, nozzle reaction, and flow impact.

This test was done using an impact plate attached to a certified load cell that measures actual impact in psi. This test is meant to show which nozzle has the best penetration capabilities based on the power of the stream. Both nozzles were tested at their respective flows. At 180 gpm, the smooth bore with a 15⁄16-inch tip had an impact measurement of 53.4 psi. The Vindicator Heavy Attack nozzle, at 240 gpm, had an impact measurement of 60.2 psi.

Let’s take a look at some nozzle comparisons to see how the Vindicator stands up:

What do all these numbers tell you? Basically, the Vindicator nozzle offers the flexibility of an interior attack line with flows reaching the capabilities of a 2½-inch line.

The air inlet ports at the base of the barrel help create the large droplets of water in the fire stream. Besides this capability, the air inlet ports also let you use the Vindicator as a foam nozzle. Depending on the foam manufacturer, you can expect foam expansion ratios ranging from 7:1 up to 15:1 without a reduction in stream performance.

Based on the preceding, the Vindicator nozzle offers the following desired capabilities of a fire nozzle:

Kirk Allen, CEO, First Strike Technologies, states that the Vindicator nozzle should not replace every nozzle on an engine company. It’s just another tool in the toolbox.

PAUL SHAPIRO is the director of Fire Flow Technology. He is a nationally recognized instructor on large-flow water delivery. He is also a retired engineer from the Las Vegas (NV) Fire Department. He has authored numerous articles for fire trade magazines. He has been in the fire service since 1981, is the author of Layin’ the Big Lines, and produced the first in a series of videos on large-flow water delivery.