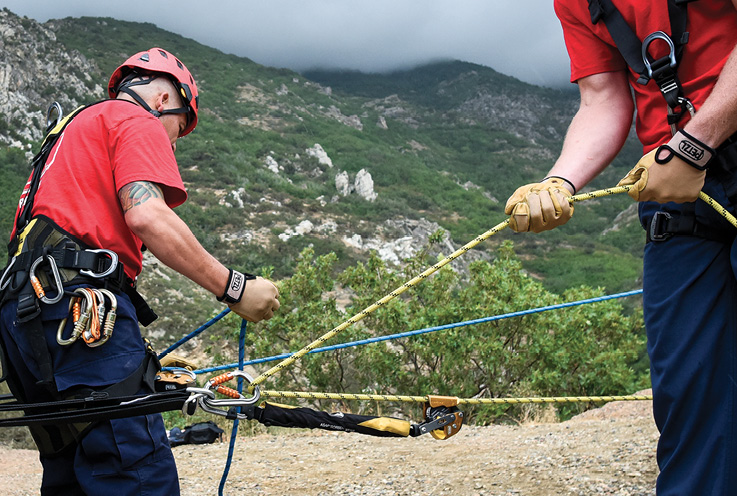 As a fire and rescue instructor, I knew the first time I got my hands on the Petzl ASAP that the possibilities and potential were endless. That first encounter was during a representative visit in 2011.

For readers who are not familiar with the ASAP, it is a self-trailing mobile fall arrest device that is designed to be used on the static, kernmantle ropes we use in the fire service. It is suitable for two-person loads (550 pounds) and is used in conjunction with a shock absorber to minimize impact forces should a dynamic event occur. I often jokingly refer to it as my “rescue robot” because its dependability can replace a whole rescue teammate and protect rescuers in an easy and reliable fashion. Today, the backup functions and fall arrest solutions that the ASAP provides are used in many programs daily within our agency.

If you are unfamiliar with the concept of a “backup device,” let me explain. Imagine you arrived at the scene of a disabled window-cleaner platform halfway down a 10-story building. You take a freight elevator to the roof with all your gear. You’ve elected to perform a “pick-off” rescue of a conscious and cooperative patient and continue to the ground. The rescuer deploys a rappel mainline over the parapet to the ground. That line is secured to a suitable anchor. This is where the backup device comes into play. Instead of making a traditional belay—with an operator and Prusiks or similar—another line is deployed to the ground along the same path as the first. This line is attached to an independent anchor. Instead of using an untensioned belay and another staffing position, the rescuer installs his chosen rappel device on the mainline and an ASAP on the backup line. The ASAP (or ASAP LOCK model), combined with the ASAP’SORBER AXESS, has a wheel and shock pack. The wheel and internal mechanism acts as an inertial brake. During a fall or uncontrolled descent exceeding six feet per second, the device locks onto the rope and holds its users in place. In this rescue scenario, the rescuer has a redundant and independent system and can perform a pick-off unassisted (in theory).

1 The ASAP is a self-trailing mobile fall arrest device that is designed to be used on the static, kernmantle ropes used in the fire service. (Photo courtesy of Petzl America.)

The key of this little device is that it can trail the rescuer both up and down the rope. It does not need to be “towed” or manipulated by the operator. It just follows, like a little angel over your shoulder. Many early attempts at this kind of backup device were susceptible to defeat or interference by a panicked and falling operator. The two ASAP models have no such limitations and resist defeat or interference from the user.

I and many of my colleagues held strong beliefs that when anchored, the ASAP can also act in the capacity of a rescue belay. Several users reached out to Petzl for validation in this application. After almost a year, Petzl France and Petzl America released their tests and approval for use of the ASAP and ASAP LOCK as anchored belays for loads up to 550 pounds. These tests and associated “Tech Tips” can be found at https://www.petzl.com/US/en/Professional/Mobile-fall-arresters/technical-content-product/ASAP. In 2017, I presented a series of ASAP tests to the International Technical Rescue Symposium (ITRS). The tests used a 600-pound test mass and both pulley and carabiner changes of direction. The ASAP system worked exceptionally well under these rigging conditions. Tom Pendley, position and company, tested various anchored ASAP configurations and presented the results to the ITRS crowd in 2018. Both proceedings papers can be found at http://itrsonline.org/. I urge readers to stay within the manufacturer’s guidelines as noted above, but I am confident that the ASAP system can handle even heavier loads, especially when a deviation over an edge pad is introduced in the system.

A quick look at curricula, rescue blogs, and social media posts will enlighten readers to the myriad emerging techniques for which the ASAP and ASAP LOCK are currently being used. This is particularly indicative of a blending of techniques or styles of fire-rescue and rope access. It is apt that the fire service pay attention to and adopt rope access practices, as the emphasis is on self reliance, small team response, and simple rescue techniques is paramount. The ASAP fits into this model. My agency uses them with high confidence in a traveling mode for fall arrest systems when rookies are rappelling or practicing bailouts. Additionally, they are used as one- or two-person load belays with the ASAP anchored, backups to skate block systems, backups to reeves, and for users to access structures like telecommunication towers. As a survival-minded individual, I look at device adoption very intently. Does the device offer many uses—like a Swiss Army Knife? For the ASAP system, the answer is a resounding yes. Unlike with Prusiks, Munters, and the like, my mind is at ease knowing I can count on the ASAP, all the while saving on work and staffing.

RUSSELL McCULLAR is a senior instructor with the Mississippi State Fire Academy. His responsibilities include managing National Fire Protection Association 1006, Standard for Technical Rescue Personnel Professional Qualifications, rescue programs. He is a rescue specialist and technical search specialist with FEMA Tennessee Task Force 1. With 18 years in the fire service, he is an NEFO graduate and has a master’s degree in homeland security and a bachelor’s degree in business administration. He instructs rescuers in Mississippi and around the country. He also teaches and consults around the country with his company Craft Rescue and volunteers as an instructor for the National Cave Rescue Commission.