Fire departments around the country are continuing to outfit their firefighters with personal escape systems to allow them to bail out of a building if the situation makes it necessary. And if that situation ever arises, the makers of those systems want to be sure the firefighters can perform the task both quickly and safely.

Matt Hunt, work market manager for Sterling Rope Company Inc., says Sterling Rope’s FCX Escape System is focused around the FCX Descent Device, FireTech2 100% Technora® escape rope, and SafeD carabiner, mated with a wide assortment of anchors, carried in an F4-50 bag or an Escape Kit Pocket Bag. “The FCX Descent Device is an autolocking descender where if you let go of it by accident, it will stop the descent as opposed to a figure 8 descender,” Hunt points out. “The FCX also has overspeed control, where if the user pulls too hard on the lowering handle, the device will slow down as well.” 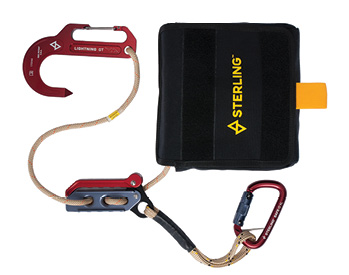 Hunt says that the anchor hook is arguably the most important part of any personal escape system. “You have to have a solid anchor to make a safe bailout,” he notes. “Any of the hook shaped anchors will allow for a sill anchor at a window, and there are different designs of hooks to facilitate tying off to an anchor in a room.” Sterling Rope’s FCX Escape Systems are available with either a Crosby hook or Lightning GT hook, and the company also continues to make F4 Escape Kits, its original, customizable personal escape system built around its F4 descent device.

Personal Escape System Use Continues to Expand Across Fire Service

Kelly Byrne, founder of Rescue 2 Training and a rescue school instructor for CMC, says CMC’s LEVR™ Escape System is built around the LEVR Descender, which is designed to ensure rapid emergency egress with a safe, controllable descent. “The device allows for an excellent transition from a windowsill, will roll over any obstacle, and allows for hands-free edge transition,” Byrne says. “The system includes 50 feet of proprietary CMC Fire Escape Web made of 100% Technora fiber for strength and durability when exposed to heat and flame and a Flash2™ Escape Anchor, all organized in a Fire Escape Bag constructed of DuPont™ Nomex® fabric.”

CMC also offers the Escape Artist™ Lumbar System, a reversible low-profile system that uses a lumbar bag to separately secure the Escape Artist descender and rope or web separately connected to a Flash2 Escape Anchor in a quick-draw style pocket and the Survivor™ escape system that features a Survivor 8 descent device, 50 feet of Escape line, and two ProTech™ auto-lock carabiners in a Cordura® nylon escape bag.

Omar Jordan, president of RIT Safety Solutions, points out that RIT makes a dozen variations of DuPont Kevlar® escape belts and Class II and Class III harnesses. “We offer four descending devices that can be used with our Kevlar rope or webbing in personal escape systems,” Jordan says, “the ISC D-5, RAD, D-4, and D-2 autolock with panic feature descending devices. The devices have a handle-operated cam system so that in a panic situation the descender actually stops the descent instead of only slowing it down.” Anchor options in RIT’s personal escape systems include an RSS aluminum hook with a reflective deployment tab, a CMC aluminum Flash Hook Lite, a steel Crosby hook, an RPI/NARS aluminum hook, and an SMC aluminum allow carabiner. 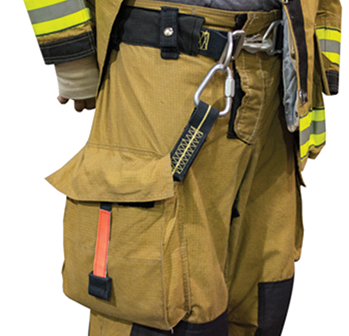 RIT also makes the Kevlar RIT Escape/Ladder belt that can be integrated into bunker pants belt loops and is equipped with a 2-inch ladder hook and Kevlar lanyard stowed in a pouch. Jordan notes the belt is rated at more than 9,000 pounds breaking strength and has a burn rating of 862°F.

Alysha Gray, product marketing director of fire personal protective equipment for Lion, says Lion works closely with CMC to put together personal escape kits that interface with Lion’s Class II harnesses in its turnout pants. “The harness’s belt and leg loops are in between the pants liner and outer shell,” Gray points out. “The connection point for the harness comes together outside the shell, while vertical openings and a series of belt loops inside the shell hold up the harness. On the outside, we use belt loops to hold the D-ring and the clasp of the harness ready to be deployed.”

Gray notes that Lion’s personal escape system starts with a carabiner that hooks into the harness D-ring. Attached to the carabiner is a tether with a snap link on the other end that attaches to the descent control device, either a CMC LEVR or Escape Artist, into which the rope is threaded with an anchor hook on one end. Everything from the snap link down goes into a pocket on the turnout pants.

Lion makes variations in the turnout pants pockets to handle fire department requests, Gray says. “One variation is a removable pocket that can be used as a throw bag,” she notes. “Another is stacked so the rope can be packed in the bottom, while a third provides a separate pocket for the anchor hook.” Lion also makes an escape belt that fastens through the outer belt loops on its turnout pants, which will interface with its bailout kit. 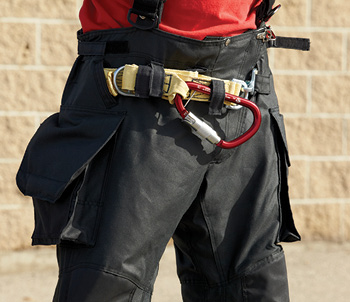 3 This Class II harness made by Lion is integrated in between the inner liner and outer shell of its turnout pants, which interfaces with a CMC LEVR or Escape Artist descent control device, a carabiner, a snap link, a D-ring, and 50 feet of Technora rope. (Photo courtesy of Lion.)

Todd Herring, director of marketing for Fire-Dex, says his company makes the I2H Integrated Class II Harness in its FXR model turnout gear. “The I2H is an A-frame harness that provides proper egress positioning and optimal center of gravity while descending,” Herring says. “There is no hardware inside the pant, which reduces the potential for material abrasion; it can be customized for left or right fly opening; and its floating D-ring makes it easy to connect to any descent device.” 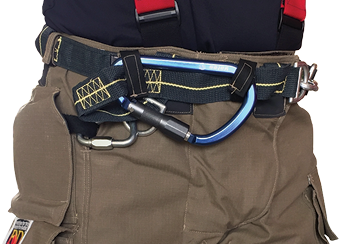 4 Fire-Dex makes the I2H Integrated Class II harness in its FXR model turnout gear, which can be connected to a personal escape system. (Photo courtesy of Fire-Dex.)

Jason Traynor, MSA’s general manager of global respiratory protection and fire helmets, says MSA makes the G1 Rescue Belt II, designed for emergency egress. The system is ergonomically contoured, Traynor notes, and stores rescue rope, a hook or carabiner, and a descender device in a belt pouch that attaches to MSA’s G1 self-contained breathing apparatus (SCBA). The system can be fitted with either a Crosby hook, Lightning, or Lightning GT hook anchor. 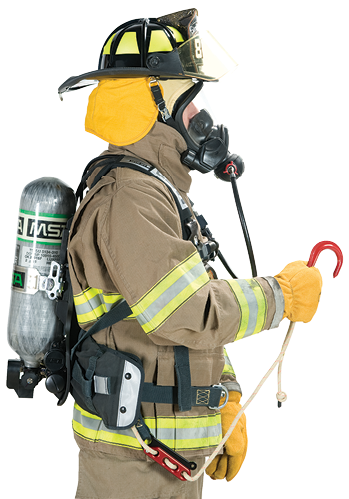 5 MSA makes the G1 Rescue Belt II that’s designed for emergency egress and can be fitted with either a Crosby hook (shown), Lightning, or Lightning GT hook anchor. (Photo courtesy of MSA.)

MSA also makes the FireHawk® Rescue Belt II that can use the same anchors as the G1 Rescue Belt II and is available with 50 feet of MSA aramid/nylon rope or FireTech 32 rescue rope. Traynor adds that the system is compatible with all MSA pouches.

Claude Barbeau, general manager of INNOTEX, says his company makes an Integrated Class II Harness for its ENERGY™ turnout pants that is integrated between the outer shell and the inner liner. Barbeau says the system features an easy-opening hook, belt loops front and back, a sliding D-ring to attached to the escape system or tether, a quick release stow tab for the tether, and various pocket options to store rescue devices and rope. “The harness is made of 100% DuPont Kevlar webbing with high-strength Kevlar stitching,” Barbeau points out. “It can be set up right to left or left to right, depending on preference, and its hook and D closure ensures optimal speed and secure fastening.” 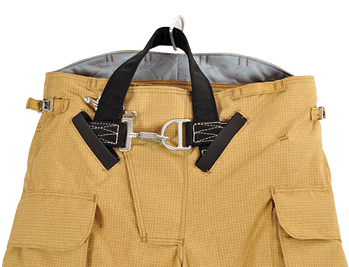 6 Veridian integrates both Fire Innovations and RIT Safety Solutions harness systems in its turnout pants, both in internal and external fashions. (Photo 6 courtesy of Veridian.)

Doug Dafler, director of sales for Veridian, says his company offers escape harness systems from both Fire Innovations and RIT Safety Solutions that can be built inside Veridian’s turnout pants or worn externally.