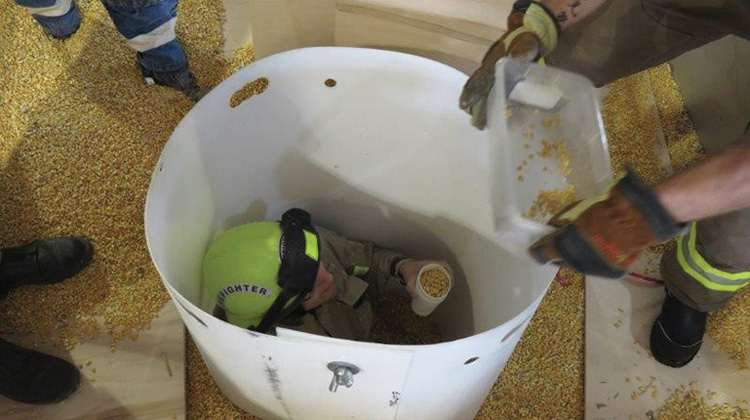 to the rescue Carl j. Haddon

Most people know Turtle Plastics (Lorain, Ohio) as the company that makes the Turtle Tile compartment matting found inside most fire apparatus.

Others know it as the company that makes the heavy-duty plastic cribbing, step chocks, and bag pads that are made from recycled plastic milk jugs. Few, however, know of its philanthropic works and finding new solutions to age-old fire service and industrial challenges.

The company’s latest endeavor is to bring awareness to the very large issue of grain entrapment that occurs in grain storage bins, silos, transport trucks, trains, and cargo ships. Technically, a grain entrapment occurs when a victim is buried in grain beyond his ability to self-extricate. In a grain engulfment, the victim is entirely covered beneath grain. Half of grain entrapments lead to engulfments, which are almost always fatal. In addition to bins and silos, statistics show more than 140 recorded deaths have been related to grain transport boxes—mainly children riding atop grain loads and being sucked in as dump gates are opened. It’s a category with an incomparable impact on farm families: 95 percent of victims are boys with an average age of 11.

Even with training and awareness, danger is always lurking. Research cites an Illinois fire department undergoing grain bin rescue training. The assistant fire chief of the department hosting the training, also a grain farmer, suffocated in a grain bin just weeks after the training session.

Although it is thought that grain entrapment is confined to “Grain States,” this is not at all true. Truck, train, and cargo ship loads of grain traverse this country regularly. Most states have grain storage bins or silos in everywhere from livestock feed lots to industrial breakfast cereal making facilities! Believe it or not, Purdue University research shows that from 2006 to 2016, grain entrapments accounted for roughly 50 percent of all reported confined space incidents in the nation.

The Turtle Plastics answer to this rescue challenge is called the “Turtle Tube” (US Patent D809,210). A few years ago, I was introduced to Turtle Plastic’s Grain Entrapment Rescue Tube during a confined space grain bin rescue program (photo 1). For 2019, Turtle has redesigned its “Turtle Tube” by adding a self-contained (no parts to drop into the grain) and a self-latching system for faster and safer deployment. Additionally, it has added a serrated edge to the bottom of the tube to allow for less resistance when pushing the tube into the grain and around the victim. Unlike the other recycled plastics products that Turtle is widely known for, these grain entrapment rescue tubes are made from virgin materials. Very much like all its other products, the Turtle Tubes are also made in the USA and can be turned back in for a recycled credit once the product has reached the end of use. This newly redesigned rescue tube will be on display at booth 3369 at FDIC International this month.

In addition to Turtle’s grain rescue tube, the company decided to up the ante and pay it forward in its attempt to raise awareness of the grain entrapment issue in a couple of nontraditional (by fire service standards) ways. Turtle Plastics has teamed up with motion picture producer Sam Goldberg and company to help produce and promote a major motion picture titled SILO to bring awareness to the real-world issue of grain entrapment. The film is based in part on the real life 2010 incident in Illinois, where three teenagers were entrapped in a grain bin, and two of the boys died. The film stars Jeremy Holm, best known for his role as FBI Agent Nathan Green in the Netflix series House of Cards. The film used actual New Hope (KY) Fire Department and Bardstown (KY) Fire Department firefighters in the cast as well as New Hope’s Rosenbauer fire apparatus. The film also highlights some of the very real and present struggles found in rural farming communities where a significant number of volunteer fire departments and firefighters live and serve. The feature film is due to be released in the late summer or fall 2019.

Although there were no Turtle rescue tubes used (or harmed) in the filming of the movie (they didn’t exist in the time the movie depicts), the fine folks at Turtle donated grain bin rescue tubes to local volunteer fire departments in the area surrounding the filming.

As Turtle Plastics founder Tom Norton was preparing for his own retirement last year, he developed the Turtle Foundation, whose nonprofit mission statement shares the Turtle “family’s” vision: “The Turtle Plastics Foundation was formed on June 22, 2017, to establish a broad-based nonprofit organization whose mission is to advocate, create, support and promote educational, environmental, health, and safety initiatives worldwide. It will accomplish this mission through grants, donations, public awareness events, and other marketing efforts. The focus of the foundation will be the support of worthy nonprofit causes related to the improvement of public health, education, safety, and the global environment.” With specific regard to the fire service, the Turtle Foundation donates funds for firefighter training, such as those for grain entrapment training and other programs.

Company President Liz Demetriou says, “Since 2017, we (Turtle Plastics) have donated 50 rescue tubes to training programs and fire departments in need.” That amounts to roughly $50,000 worth of donated product. The company also has a grant program for farm bureaus and insurance companies wanting to buy Turtle Tubes and donate them back to financially strapped fire departments and rescue squads.

As you can see, Turtle Plastics is a company that is “paying it forward” to spread the word not only about its products and the very serious challenge presented by grain entrapment calls but for the greater good of humankind.

If you are not familiar with Turtle’s line of products, you owe it to yourself and your department to check them out at www.turtleplastics.com or at FDIC International.

I also have it on good authority that Jeremy Holm (himself from a firefighter family in Colorado) and Producer Sam Goldberg will be wandering the halls and classrooms at FDIC International and “hanging out with us after hours.” They can also be found at the Turtle Plastics booth signing autographs and talking shop.

Do you have grain storage bins or silos in your response area? Is your staff educated and “trained up” for this kind of rescue response? These entrapments are extremely time-critical and require rescuers to be on top of their game with the right knowledge and equipment.