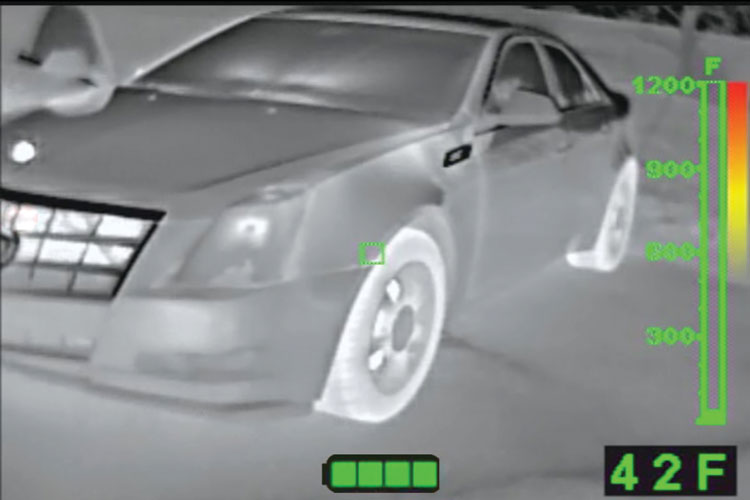 I recently read a news story about a team of firefighters who used a thermal imaging camera (TIC) to locate and rescue a fisherman whose boat had capsized. As I read this story, it became clear to me that these firefighters were well-trained in the use of thermal imaging technology and used that training knowhow during this rescue.

As I’ve said previously, a TIC cannot see underwater, but it can detect heat sources above the water. The firefighters who were conducting this TIC search knew that. As the firefighters scanned the water and the shoreline, their TIC screen showed a “white” speck, indicating some sort of heat source. The firefighters followed that speck, which led them to the fisherman, who had made it to shore. The fisherman is a very lucky man that these firefighters immediately thought to use the TIC to find him. According to the fire chief, it was cold and dark outside, making it extremely difficult to conduct a search. In fact, the fire department feared the worst and was in the process of calling in divers to begin searching the water. Under these extreme conditions, the TIC helped to save this man’s life.

These firefighters had the forethought to use the TIC and, most importantly, understood the technology to investigate the “white” speck they saw on the TIC’s screen. TICs are becoming more common in fire departments now that this tool is better understood by the fire service and much more affordable to purchase. Thermal imaging technology is not only for fighting fires but for emergency incidents that firefighters respond to every day. Let’s look at using a TIC in nonfire applications.

Motor vehicle accidents happen every day, but how often do firefighters use a TIC when responding to them? When arriving on the scene, it’s critical to determine how many people were in the vehicle prior to the accident to account for all occupants. Use the TIC to check the automobile seats for hot spots to determine how many people were in the car. A TIC cannot see through glass, so be sure to open or remove the vehicle’s door or window before you scan. Don’t scan just one seat; scan multiple seats at the same time for comparative purposes, since your TIC will show residual heat. Look for contrasting heat signatures.

Recently, a firefighter shared with me an incident that occurred at night where a motorist lost control of his automobile and hit a tree at a high speed. On arrival, firefighters found the driver unconscious inside the car and the passenger door open. They used the TIC to scan the inside of the car. The image on the TIC screen indicated a hot spot on the passenger’s seat. Knowing this, the crew used the TIC to scan the area and found a second victim several feet away from the accident.

I am often asked, how long will the thermal contrast remain after a person has left the seat? It’s hard to pinpoint exactly, but you can typically count on 15 to 20 minutes, depending on the outside temperature, humidity, the seat and clothing materials, and the amount of time the person was sitting in the car.

Use the same TIC search for motorcycle accidents. Often these accidents involve the driver and passenger being thrown great distances. By using the TIC to scan the motorcycle seat, firefighters can determine how many victims they are searching for. You can also use a TIC to track the trajectory of an automobile or motorcycle that has left the roadway by identifying the tire marks left behind. The TIC will show warm heat signatures of the tire tracks, allowing firefighters to follow the tracks to help locate victims. If your crew is not using a TIC to scan automobile accidents, start doing it. It will save you time and maybe even a person’s life.

Another incident involved a 61-year-old woman who wandered away from her home. Police were searching her neighborhood and a field near her house for more than an hour without finding any clues. After nearly two hours of searching, police called in the fire department to help. Time was critical, since the woman had been missing for more than two hours and it was getting dark and cold. Immediately, firefighters headed to the highest point behind the property to scan the field with a TIC. The TIC picked up a faint heat spot. The firefighters followed that spot and found the woman lying on the ground, partially hidden by vegetation. Within 15 minutes of searching using the TIC, firefighters rescued the woman. They said the woman was found about 15 feet below grade and 200 feet away from the area that the TIC first captured the image.

These real-life examples show how versatile a TIC can be in nonfire applications. Next time you respond to a nonfire call, please remember to use your TIC. This tool can save time and, most importantly, lives.

Carl Nix is a 30-year veteran of the fire service and a retired battalion chief of the Grapevine (TX) Fire Department. He serves as an adjunct instructor for North Central Texas College and a thermal imaging instructor for Bullard. Nix has a bachelor of science degree in fire administration and is a guest instructor for Texas A&M Engineering Extension Service’s (TEEX) annual fire training in Texas.