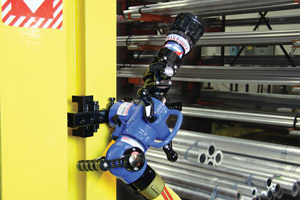 VALPARAISO, IN—TFT‘s new Hemisphere initial attack monitor offers a full hemisphere (360 degrees) field of attack, as well as an easy-to-use monitor base mount that attaches quickly and safely to a beam, a railing, a tank lip, a concrete barrier, or even a common trailer hitch.

Like the Blitzfire series, TFT’s first concern with the Hemisphere was safety. This monitor, when attached to a 2½- or three-nch attack line, delivers up to 500 gpm, with 200 (plus) pounds of nozzle reaction.

“That’s why we integrated a safety feature into the Hemisphere’s base that locks the monitor onto the base when it’s flowing,” said Scott Akins, TFT‘s Vice President of New Product Development. “If you want to move it, you have to shut the Hemisphere down completely before you can detach it from the base.”

Similarly, the Hemisphere’s new “anti-drop” mechanism prevents operator errors. If the monitor is mounted upside down, and an operator pulls the release pin, the Hemisphere remains locked into place. The security mechanism requires the operator to support the monitor before it can be safely removed.

To attach the 22.5 pound Hemisphere to one of its four available mounts (I-Beam Clamp that doubles as a two-inch hitch mount, a dedicated Hitch Mount, and two Fixed Mounts), the operator simply slides the socket at the end of the monitor onto the quick attach mounting base. Once mounted, the rotation release lever allows the monitor to be rotated freely around its base.

The variety of mounts allows industrial users to set up numerous “Hemisphere base stations” throughout their facilities. The operator then carries the monitor to each station, attaching it to one of the individual base mounts as needed (cutting costs by allowing a single monitor to be used in multiple locations).

The monitor can be pointed horizontally or vertically, unlike other ground monitors. Its integrated, quarter turn, aluminum half-ball valve with locking bail handle provides shutoff capability.

The monitor also boasts a unique rotating, swiveling waterway specifically designed to allow the stream to be pointed in virtually any direction within a 360-degree range, without disturbing the water flow. Its stream integrity is ensured by the monitor’s built in stream straightener. The monitor and valve bodies are hard coat anodized aluminum inside and out, with TFT‘s signature powder coated blue finish.
For more information on the Hemisphere, visit www.tft.com. TFT will be at booth 3513 ad FDIC 2013.