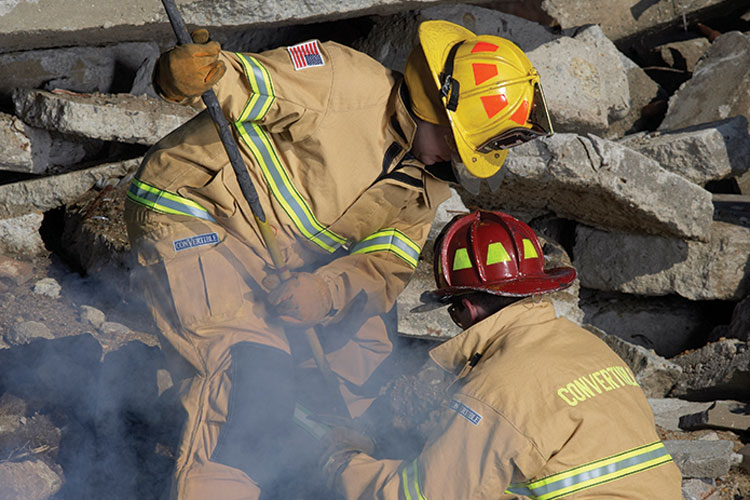 Technical rescue personal protective equipment (PPE) is designed specifically for rescue tasks rather than for structural firefighting. While it provides protection for the wearer, PPE manufacturers say it also allows greater mobility and flexibility and puts less stress on the firefighter.

Not a New Concept

Rob Freese, senior vice president of marketing for Globe Manufacturing Inc., says Globe was first involved with technical rescue PPE being flame retardant in the 1990s. “We were supplying PPE to FEMA (Federal Emergency Management Agency) rescue teams, and a few teams complained about having to wear either turnout gear or coveralls for long-duration events,” Freese says. “They had a need for gear with a tough outer shell, especially in the early stages of a situation where they might be dealing with unknown chemicals in a building, bodily fluids, or other liquid challenges.”

Freese notes that Globe personnel worked closely with FEMA rescue teams to better understand the environment they work in. “We were part of a group that included Lion, W. L. Gore and Associates Inc., and PBI Performance Products Inc., which developed prototype technical rescue gear that was the basis for National Fire Protection Association (NFPA) 1951, Standard on Protective Ensemble for Technical Rescue Operations.”

It was high-profile events that spurred the development of technical rescue gear further, says Freese. “Our first order for this type of product was during the Oklahoma City bombing,” he points out. “Our technical rescue gear also was deployed on September 11, 2001, at the Pentagon because of the kinds of environments they were dealing with.”

Today, technical rescue gear is designed for situations where there is a potential fire hazard but where self-contained breathing apparatus (SCBA) is not needed, Freese says. “About 87 percent of what a fire department does is not structural firefighting,” he observes. “Fire departments respond to a broad range of activities, and that’s what technical rescue PPE is designed for-situations like flash fire assault, chemicals, and auto extrications.”

Alysha Gray, product manager for fire PPE at Lion, says Lion’s technical rescue PPE is custom constructed much like Lion’s structural turnout gear. “The outer layer is inherently fire-resistant, made from one of two fabrics: Millenia SR, a TenCate product, or six-ounce Nomex® and 5.3-ounce PBI Triguard®, made by PBI Performance Products Inc.,” Gray points out. “The inner layer is made from CROSSTECH® S/R by W. L. Gore, which protects against blood-borne pathogens, water, and other liquids.”

Gray notes that Lion’s technical rescue gear has a bi-swing back in the jacket to allow for easier flex and range of motion, a zippered leg in the pant for easier donning and doffing, and reinforcements as an option in high-wear areas like the knees and cuffs.

Todd Herring, director of marketing for Fire-Dex, which owns TECGEN™, says that for technical rescue, “TECGEN PPE is our core product designed from fabric specifically designed for rescue work where heat stress is one of the top risks faced by the wearer. When we designed this gear, we wanted as much thermal heat loss (THL) as possible while still meeting the NFPA 1951 standard.”

Herring points out that TECGEN PPE “is very high-strength, yet comfortable, flexible, and maneuverable.” It also meets the criteria for wildland turnout gear under NFPA 1977, Standard on Protective Clothing and Equipment for Wildland Fire Fighting, Herring says, but is specifically designed for technical rescue.

“The unique part of this technical rescue gear is the fiber technology itself, which is a patented fiber that we blend into the garment,” Herring says. “It has an extremely high thermal protection capability but is not brittle. We are able to design the fabric to be lighter and more breathable but still have the thermal protection needed.”

Freese notes that Globe’s technical rescue PPE gives flash fire protection to the user but is much easier to wear for any type of duration compared to structural firefighting turnouts. Globe’s technical rescue gear is made with a choice of flame-resistant outer shells, he says, and with W. L. Gore’s CROSSTECH S/R inner lining. “It easily handles the challenges a firefighter faces every day, including weather, blood and bodily fluids, common chemicals, and flash fires,” Freese adds. The gear meets NFPA 1951 as well as NFPA 1999, Standard on Protective Clothing for Emergency Medical Services.

Gray notes that Lion makes MedPro, launched last year, which is an emergency medical services (EMS) turnout that meets NFPA 1999. “The outer shell is inherently fire-resistant, consisting of a Westex® DH outer shell and a breathable CROSSTECH EMS moisture barrier,” Gray says. “It comes in navy and high-visibility yellow, which means it’s compliant with American National Standards Institute 107, so you don’t need to wear a high-vi sibility vest on the scene.” She adds that Lion also makes the VersaPro utility and EMS gear, which meets NFPA 1977 and 1951 but doesn’t have a moisture barrier.

Honeywell First Responder Products makes Morning Pride® technical rescue and recovery gear, a two-layer, two-piece set of gear that meets NFPA 1951, NFPA 1999, and NFPA 1992, Standard on Liquid Splash-Protective Ensembles and Clothing for Hazardous Materials Emergencies. It is made with a high-breathability fire-resistant outer shell of 5.5-ounce Millenia Light that consists of 40 percent PBO and 60 percent Kevlar® with enhanced water repellency and a moisture barrier of 4.3-ounce two-layer CROSSTECH S/R.