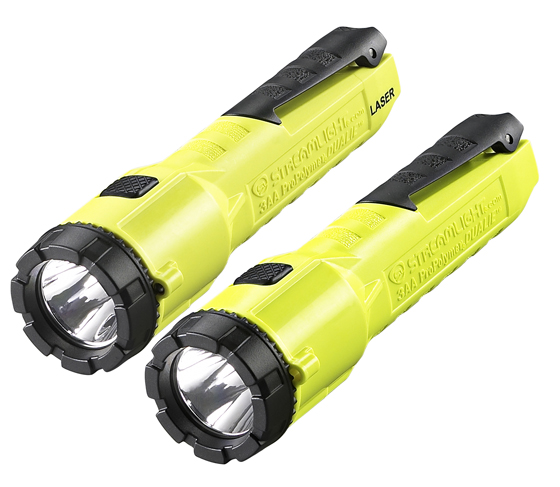 The 3AA ProPolymer Dualie features three output modes. Its LED spot beam provides distance illumination, while its LED flood beam is designed for close-up work. The two beams also can be used together to create an uninterrupted light pattern that delivers 245 lumens, while optimizing navigation and eliminating blind spots. The laser model of the light provides a focused LED spot beam in combination with the laser pointer, also for separate or simultaneous use.  Both lights are safety rated for use in Class 1, Division 1 environments faced by many industrial workers.

The new lights feature separate dual head switches for easy, one-handed beam operation. The two beams on each light can be activated simultaneously by depressing both switches.

Each of the new lights also includes a rugged, non-protruding, snag-free clip that conforms to the light’s body, while easily grabbing onto shirts, pockets and other gear for hands-free use.

“The 3AA ProPolymer Dualie is like having two lights in one,” says Streamlight vice president, sales and marketing, Michael F. Dineen. “The light’s flexible options are perfect for helping industrial and other professionals avoid slips, trips and falls when conducting close-up inspections, illuminating wide areas, or when they need both capabilities simultaneously. And, the laser model of the light provides a bright spot beam, with the added convenience of a red laser pointer for illuminating and pinpointing objects at a distance.”

Run times for the 3AA ProPolymer Dualie are 18 hours in both spot and flood mode, and 9 hours when the beams are combined. For the Dualie Laser model, run times are 17 and 70 hours, respectively, for the white LED and laser modes, and 12 hours for the two beams combined.  Both lights are powered by either three “AA” size alkaline or lithium primary batteries.

Both of the new lights weigh 6.8 oz. with AA alkaline batteries (5.9 oz. with AA lithium batteries) and measure 7.00 inches in length. They both feature a durable, non-conductive, corrosion-proof polymer resin casing and a rocky stipple texture for a sure grip.

IPX7-rated for water-proof operation to one meter for 30 minutes, both lights also are impact-resistant tested to 2 meters. They are available in either high visibility yellow or black.