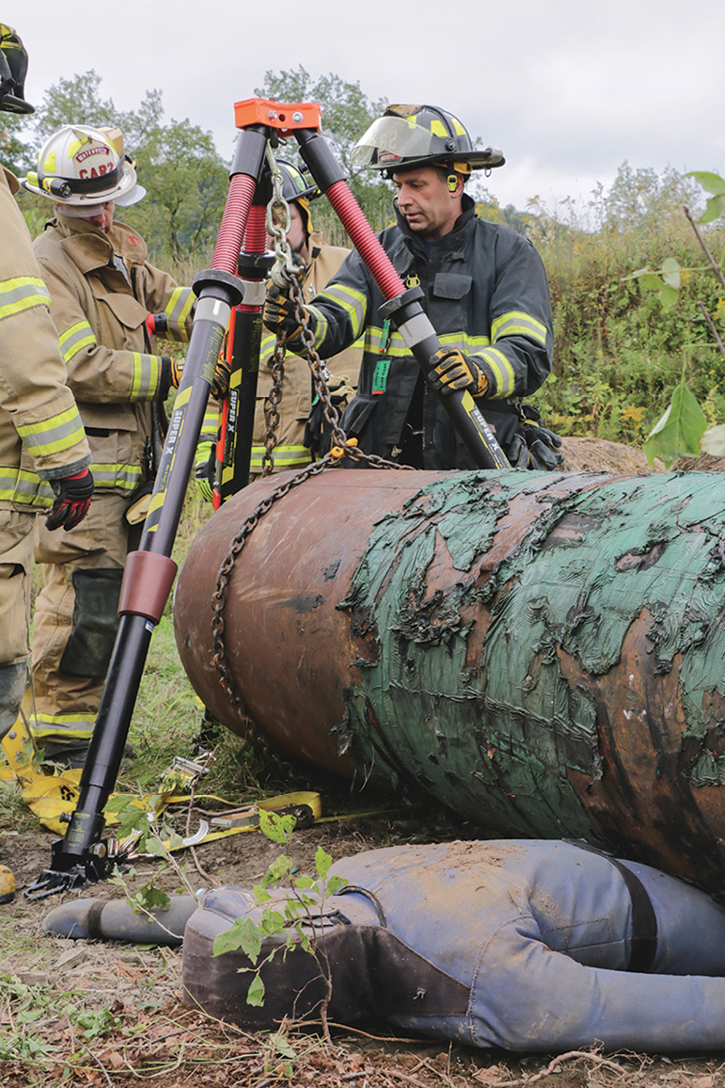 Technical rescue teams use a variety of equipment to support collapsed structures or trenches and move heavy debris to gain access to confined void spaces. Hydraulic tools have made their way into this rescue discipline, along with typical pneumatic equipment including struts, jacks, and lifting bags.

Tom Gavin, national sales manager for Paratech Inc., points out that air bags are the most popular items that Paratech makes, which are commonly used in structural collapse and similar rescue situations. “We make the MaxiForce® air lifting bag, a thin, strong, molded envelope made from three layers of Neoprene-covered aramid fiber reinforcement in 14 different sizes and in both square and rectangular shape,” Gavin says. “The MaxiForce air bags have the power to lift up to 89 tons and can be inserted flat to lift, horizontally to push objects apart, and at an angle to lift and shift simultaneously.”

Gavin notes that the MaxiForce lifting bags are commonly sold in kits, some with air bags of the same size to facilitate a multipoint lift. A popular kit, he says, is the Model 136 Kit that has 11 lifting bags ranging in lift capacity up to 54 tons. “These bags can be used to lift rubble to rescue victims in a collapse situation,” he observes. Rescue struts are commonly used in conjunction with the air bags to support the debris, he notes. “In a trench rescue situation where one or both sides of the trench have collapsed, the air bags can be used to backfill the void spaces behind the shoring panels as they are being set in place. The shoring panels would be held in place against the air bag by rescue struts to protect the victim and rescuers.”

The MaxiForce air bags are made of neoprene rubber, which will not build up static electricity or conduct electricity, Gavin says, and with the standard brass fittings, which are non-sparking, the system can be used safely in a flammable atmosphere.

Paratech also manufactures the MultiForce® air bag, a hybrid design that can lift heavy loads higher than a typical flat bag, Gavin points out. The MultiForce is a single air bag with dual chambers. During inflation, the bottom chamber inflates first for stability and the second chamber will inflate, providing a higher, more stable lift, up to 26 inches.

3 The Gold Long Shore Struts made by Paratech can be used in high-angle rope rescue situations.

Paratech also offers a series of rescue struts that complement its air bags. The rescue struts do not use a locking pin system that concentrates the load over a very small area but rather use threaded collars for more surface area to support much heavier loads.

The three-inch Gray Acme Thread Struts range from 12 inches up to just over 10 feet long and can support up to 40 tons at four feet in length. The 3½-inch-diameter Gold Long Shore Struts range from two feet to 18 feet and can support 40 tons at eight feet of length. The struts have multiple interchangeable heads that fit both gray and gold struts, Gavin says. “Changing heads allows the same strut to be used in a building collapse, trench rescue, vehicle rescue, and even rope rescue and heavy rigging,” he adds.

Alicia Pelton, regional sales manager for Res-Q-Jack, says her company makes the Super X-Strut® series of heavy-duty struts for structural shoring and technical rescue work. “The working load limit on the Super-X Strut series is 20,000 pounds,” she points out. “This is our premium stabilization and lifting strut that is milled from solid aluminum and features threaded collars instead of standard pins, making it our strongest and fastest deploying strut. It’s available in extended heights of 100 inches and 68½ inches and can be made with solid inner tubing for even more stabilization power.”

4 Firefighters use Res-Q-Jack’s Super X-Strut in a tripod configuration to lift a metal tank off of a simulated victim. (Photos 4-6 courtesy of Res-Q-Jack.)

5 A Res-Q-Jack Super X-Strut is shown in a trench rescue scenario.

6 Res-Q-Jack’s Super X-Struts can be set up in tripod fashion to stabilize a heavy load.

Stacey Hubbard, regional sales manager for Res-Q-Jack, notes that the company makes 12-point, 6-point, and 3-point trench rescue kits that include long and short Super X-Strut bodies, add-on jacks, extensions, swivel head fittings, flat plate end fittings, trench plate end fittings, and large base plates. “Our trench rescue systems can be extended by air inflator kits, and one of the major benefits of our kits is we have built in a positive stop so the inner and outer tubing will not come apart,” Hubbard adds.

Mike Canon, vice president of HURST Jaws of Life, says HURST got out of the strut business when it dissolved its Airshore brand to focus its technical rescue efforts on hydraulics and pneumatics. “We are seeing a lot of use of our eDRAULIC battery-driven electro hydraulic tools in confined space and collapse rescue situations,” Canon points out, “and also the use of high-pressure high-lift air bags that run from 116 pounds per square inch (psi) to 172 psi.” Canon notes the high-lift air bags are less than an inch thick uninflated, so they can fit into very tight spaces yet have the ability after insertion to lift several tons. “But with a flat bag, the only limitation is that the more air you put into it, the less contact you have with the lifting surface because the lifting capacity is directly related to the contact surface area.”

9 A firefighter uses a Hurst eDRAULIC battery-operated cutter to slice through rebar imbedded in concrete.

Canon notes that often rescuers will use a HURST eDRAULIC hydraulic spreader to make room for an insertion and then use a C-Tech high-lift connectible bag made by Vetter Connectible Bags, which is owned by IDEX Fire and Safety, as is HURST. “The eDRAULIC tools are especially useful in collapse situations,” he says. “A user can get 150 cuts with one eDRAULIC battery, or 75 spreads. Battery consumption is based on load, but the technology of lithium-ion batteries has advanced dramatically so that now we have two- and three-pound batteries that are capable of all these cuts yet are mobile and compact and have extremely slow dissipation rates when not in use.”

Confined space rescue often has atmospheric concerns, Canon says, where broken gas lines and other types of emissions can make for a hazardous atmosphere. “You don’t want to do anything that would displace oxygen in a situation like that,” he says. “The eDRAULIC tools are zero emissions and very portable, and there’s also the issue of noise, where victims might be conscious and trying to hail for help through the rubble. The eDRAULIC tools on battery power are zero decibels when you are not moving the control valve, so the tool can be on, at the ready, but completely silent.”

For extreme confined space scenarios where mobility is highly limited and a rescuer can’t fit an eDRAULIC tool, Canon says HURST makes the StrongArm® tool, a very compact hydraulic rescue tool powered by a lithium-ion battery. “StrongArm will cut through 3⁄8-inch rebar, Grade 3 chain, locks, and 2 × 4 wood,” he notes, “and has a fingertip-style adapter for lifting where the insertion distance is extremely small, like one centimeter, to allow an air bag to be inserted for a higher lift. StrongArm has an 8½-inch spreading distance, 6,744 pounds of spreading force, and weighs 25 pounds.”

Jason Bell, product marketing coordinator for Holmatro-USA, says Holmatro’s hydraulic tools are used frequently in structural collapse situations. “We make a Power Wedge that works in conjunction with air lifting bags, especially useful in a pancake-type collapse,” Bell says. “Our PW5624 runs off of a pump with a hose, while our HPW5624 is hand-operated, similar to a jack. It can be inserted into a ¼-inch space and then activated by the pump or a manual jack handle to pick up 25 tons up to two inches. Then you would insert a secondary lifting device.”

10 Rescuers use a Holmatro HLJ50-10 hydraulic jack under a structure. (Photos 10-12 courtesy of Holmatro-USA.)

12 Holmatro’s PowerShore struts being used in a trench shoring situation.

Holmatro makes air lifting bags in a variety of sizes, Bell says, and they all run at 175 psi, which allows the bag to be smaller and more compact. “Our smallest bag is 6 × 8 inches and can lift two tons, while our largest of 15 sizes is a 96-ton bag that is 35 × 40 inches,” Bell points out. “They are made out of vulcanized rubber and Kevlar® and fill multiple roles in technical rescue, including structural collapse due to tornados and earthquakes.”

Holmatro also makes the HLJ50-6 and HLJ50-10 hydraulic jacks, both lightweight aluminum models that can lift 50 tons eight inches and 12 inches respectively. It also makes the TJ3610 toe jack, used after a Power Wedge makes a two-inch gap, Bell says. “The bottom of the toe jack has a lip with an 11-ton lift capacity to nine inches,” he says. “Then you slide in wood cribbing or another jack to lift the load higher.”

Several hand-operated tools made by Holmatro are used in technical rescue and by urban search and rescue teams (USAR), Bell maintains. “One popular tool is the 5111HcT combination cutter/spreader,” he says. “It’s small and weighs less than 20 pounds but has an 11-inch spread and a maximum spreading force of 50 tons. You can use it to cut rebar, angle iron, or construction materials, and it has a self-contained reservoir of hydraulic fluid and is pumped by a handle similar to a car jack. There’s also the option of a 14-inch and 17-inch spread, and the tool is available in a heavier battery-operated version.”

For structural collapse, Holmatro makes the CC23 hydraulically operated concrete crusher operated off a pump and hose system. “There’s no vibration or noise like with a jackhammer,” Bell says. “The jaws open up to nine inches, clamp onto concrete, and break off hand-size pieces.” Holmatro also makes the PowerShore™ mechanical and hydraulic shoring systems, useful in structural collapse and trench rescue. “They are in different lengths running from five to 60 inches long where you attach the struts to the connection pieces and then add extensions.”