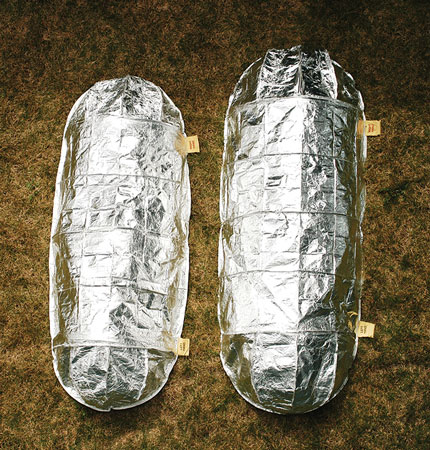 The United States Forest Service (USFS) Missoula Technology and Development Center (T&DC), in Montana, is working on a redesign of the emergency fire shelters used by wildland firefighters, making progress in both the materials being used to construct the fire shelters as well as their overall design.

One of the designs being considered comes from the National Aeronautical and Space Administration (NASA) Langley Research Center in Hampton, Virginia, that incorporates high-temperature materials developed for space entry vehicles reengineered as flexible thermal protection.

The current design of the emergency fire shelter, the M2002, was last updated in 2002, says Tony Petrilli, the Center’s fire shelter project leader. “The current shelter is a quonset hut with rounded ends and a rounded body so it reflects radiant heat much better than the old flat triangle-style pup tent it replaced that was designed back in the 1960s,” he says. “It offers three times more protection in convective heat environments and direct flame contact than the older model, and 24 lives have been attributed to being saved by the M2002.”

The USFS regular fire shelter is issued folded in a case that’s 8½ inches high, 5½ inches wide, and four inches deep. It’s designed for firefighters up to six feet tall with a girth not exceeding 53 inches at any point and, when deployed, is 86 inches long, 15½ inches high, and 31 inches wide. The large fire shelter deploys to 96 inches long, 19½ inches high, and 33 inches wide and is designed for firefighters taller than six feet one inch and with a girth of greater than 53 inches at any point. The regular size weighs 4½ pounds, while the large size shelter weighs 5.2 pounds.

Petrilli says that NASA’s Langley Research Center is one of a number of entities that has shown an interest in submitting materials to the Center for third-party testing at the University of Alberta’s fire test facility in Edmonton, Alberta, Canada. “The current pattern and shape of the emergency fire shelter most likely will not change,” Petrilli observes, adding that the advances in materials technology is where he expects major modifications.

Mary Beth Wusk, game-changing development program manager for the Space Technology Mission Directorate at the NASA Langley Research Center, says the deaths of 19 Prescott, Arizona, Granite Mountain Hotshot firefighters on June 28, 2013, when they were overrun by the Yarnell Hill Fire while deployed in their emergency fire shelters, “shook me to the core. I thought our thermal protection systems might be applicable to the fire shelters because there are a lot of similarities in what we do for space technology and what’s needed in an emergency fire shelter.”

Wusk and Anthony Calomino, chief engineer in game-changing development, reached out to the USFS and discussed different materials that might be used and eventually collaborated on a project called Convective Heating Improvement for Emergency Fire Shelters (CHIEFS).

Josh Fody, the project’s technical lead engineer, says the NASA researchers spent eight months on small-scale convective lab testing to produce a variety of materials for a fire shelter. “We screened more than 70 materials and 280 unique combinations to produce the highest efficiency material for a fire shelter,” Foster says. “In October 2014, we presented the results to Missoula T&DC, which felt they were encouraging, and signed an information sharing agreement with them in January 2015 focused on developing our own material and fabricating full-scale fire shelters for testing.”

Wusk points out that in the first round of testing, the Center built two different geometry designs and three weight designs (heavy, medium, and light) for a total of 12 shelters. T&DC researchers took the designs to the University of Alberta fire testing facility where they were tested along with M2002 shelters and changed-design shelters from another vendor. The configuration T&DC determined as the best design was a 4.3-pound version similar to the M2002 but with less surface area and greater thermal protection.

Fody says the benefit NASA has been able to bring to the project is its experience in developing flexible heat shield materials over the past 10 years, which, he observes, “lend themselves well to the development of fire shelters.” He adds that one of the targets of T&DC’s fire shelter is the breathing air zone two inches above the ground where the firefighter’s head would be. “We want the material to keep that area below 300°F for as long as possible, because that’s the upper limit temperature for a person to have his airway exposed to and survive.”

The layers of material that the Center is using to construct its fire shelter and its assembly is called a lay-up, Fody points out. “We’re using a polymer film laminate in the coolest area near the firefighter,” he says. “Then there are nonwoven ceramic felt layers where we use some tricks to maximize their potential using the intumescent concept, a phenomenon where heated material physically expands. In our case, it expands into a puffy blanket with better thermal protection after intumescence has occurred, but the firefighter didn’t have to pack in a big puffy blanket.”

Petrilli, a former USFS smoke jumper who still maintains his red card qualification to fight wildland fires, says that the USFS had planned to make a decision on a new shelter early in 2016 but expanded the project timeframe. T&DC tested a number of full-scale fire shelters from several finalists in May, and the USFS is expected to make a decision and pick one early in 2017. “Then it takes a year for specs and drawings to be done,” he points out, “which are then sent to the Defense Logistics Administration to do the contracting. T&DC would then do the contract inspections and go into production from the final specs.” He estimates the process from approval of the final design to production would take two years.

Fody observes that the challenge of improving an emergency fire shelter is a lot harder than it sounds. “USFS has been working on it for a long time,” he says. “They have to get a material with the thermal protection necessary to protect the firefighter, yet the shelter has to have an acceptable bulk mass, durability, flexibility, and be able to be manufactured on a large scale. These are all important factors in designing a new emergency fire shelter.”