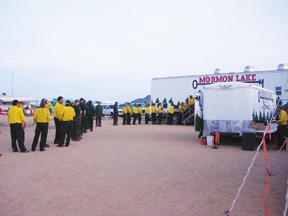 The Extend-a-Gun from Task Force Tips is used to raise
monitors for optimum 360-degree operation. 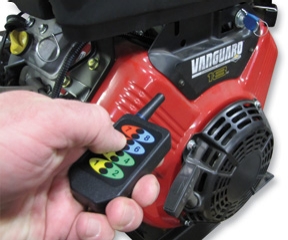 Apparatus deck guns have evolved during the past 30 years from purely manual waterways to electrically remote-controlled master stream devices to radio frequency-controlled monitors, and now microprocessors are being added.

That evolution has been accompanied by ancillary benefits, such as improved firefighter safety by not having to physically handle the deck gun in an exposed and often difficult position on top of a pumper and the ability to detach a deck gun and operate it as a remote-controlled monitor for master stream application or exposure protection.

Don Sjolin, vice president of marketing and strategic development for Elkhart Brass in Elkhart, Ind., said his firm began marketing an electric remote-controlled deck gun in the early 1980s. The first generation products had simple electric motors and cables running to sets of switches that controlled the deck gun to move left or right, up or down.

In the early 2000s, radio frequency (RF) remote controls made their appearance, and all the deck guns that Elkhart Brass produced could be operated either electrically or wirelessly.

“The advantage to the RF remote is that there was no attachment to the fire truck,” Sjolin pointed out. “It’s a handheld unit much like a television remote control that allows the deck gun operator the freedom of movement away from the truck so he can see where his stream of water is being placed.”
These days, he said, microprocessors can be used to control deck guns.

“We’ve progressed to more of a microprocessor-based unit with our EXM remote, although fundamentally the deck gun itself didn’t change much,” he said. “It’s the next generation of deck gun operating systems, bringing in the latest microprocessors and controls.”

With the Elkhart Brass EXM remote, three-dimensional limits can be programmed into the unit, as well as a near-infinite pattern of movement.

“Besides a stow function, we also have all sorts of deploy functions – pattern, position, side of the truck. All these kinds of deployments are possible now, giving the deck gun so much more coverage,” Sjolin said.

“With the microprocessor control, we also have on-the-fly programmable oscillation so you can set the deck gun for whatever number of degrees you want and for whatever duration.”

The Elkhart Brass Stinger RF remote-operated deck gun came out in 2005, a mid-range 1,250-gpm unit that can be detached from the pumper and set up as a monitor at a remote location.

“The firefighters can put it on a base and supply it with a hose line to wherever it needs to be placed,” Sjolin said. “If you can’t get the apparatus to the area you have to protect, you can put the remote there and use the RF version that’s completely battery operated and needs no firefighter to be in the hazardous area.”

The EXM, released in 2009, took all the various stand-alone remote electric monitors and moved them into an integrated control system overseen by a microprocessor, said Sjolin. It essentially is the operating system for monitors and valves and interfaces directly with the pumper’s onboard microcontrollers.
Cutbacks Generate Growth
“More and more apparatus are moving toward integrated control systems, especially CAN-based (controller area network) systems that you see in aerials and big industrial pumpers,” he said. “The EXM interfaces with the J1939 CAN communication that you find now on every fire truck with a modern power train.”
Rod Carringer, vice president of sales and marketing for Task Force Tips in Valparaiso, Ind., said remote-control deck guns and monitors mounted on the top of apparatus – pumpers and aerials – are the fastest growing part of his firm’s business.
The primary reason for that growth, he said, is cutbacks in firefighter staffing. “With a manual monitor,” he said, “typically a firefighter has to be committed to stand there with the deck gun, and he also has to be in communication with the fireground officer to direct the stream from that monitor.”
Another issue remote-controlled monitors address, he said, is safety and compliance with National Fire Protection Association standards.

“The days of firefighters climbing on top of the engine, with their boots wedged in between crosslays or in dunnage, are going away,” he said. “If fire departments can use a remote-control unit to prevent people from having to climb on top of a truck, then it’s a good decision – more costly, but safer.”

Carringer said a lot of fire departments, even those struggling with tight budgets, are moving toward remote-controlled master stream devices.

“The differential between a manual deck gun setup versus a remote-control unit of similar flows and operational characteristics will add between $5,000 to $7,000 in expense to the engine,” he said. “The additional wiring also could add approximately another $1,000 to the truck, and often control heads have to be installed too.”

Task Force Tips makes four primary remote-controlled units. The Tornado monitor is typically used to 500 gpm, and often in the 10-to-100-gpm range on brush trucks. The Hurricane typically will go up to 1,200 gpm and usually is mated with pumping apparatus in the 1,000-to-1,250-gpm range.

“There’s a range in clearance size differences, which generally isn’t so much of a problem with pumpers because they have tremendous latitude with no clearance problems, while aerials usually have much tighter quarters,” Carringer pointed out.

All of the Task Force Tips remote-control monitors have a commonality in how they’re controlled.

“They can be controlled by a joystick, control valves, panel mounts with touch buttons, on a platform or even a tether control that plugs into the pump panel and allows the operator to move 100 feet away from the apparatus,” Carringer said.

“We also can operate any of our components remotely up to several thousand feet away with a handheld 900 MHz remote-control radio frequency controller that allows tremendous flexibility,” he said. “It’s especially good in a surround-and-drown scenario where you can take the remote to where you’re trying to aim the stream and put the stream where it needs to be.”

Carringer said Task Force Tips remotes have a “last touch” feature where whoever touched a panel last has control of the deck gun or monitor until another panel or remote is touched. The remote control also offers an oscillating feature that allows the monitor to be programmed to oscillate left and right, perhaps 15 degrees for example, for several hours.

“We’re only beginning to see the flexibility and usefulness of remote-control monitors and deck guns,” he said.

Task Force Tips also makes Extend-a-Gun, a component that sits beneath the monitor and is mounted into the top of the fire pump’s manifold.

“We replaced the typical 3- or 4-inch pipe out of the top of the fire pump with something that allows it to extend up to 18 inches from its nested position,” Carringer said. “It’s operated by an electric motor and the pump operator only has to hit a button and the monitor remotely extends up.”

As trucks get taller, he said, deck guns must have a low profile in order to get the engines into some stations. If the gun could not extend, he said, its field of fire would be limited.

TFT’s Extend-a-Gun allows the monitor a 360-degree field of fire, and Carringer said 80 percent of remote-controlled monitors sold by his company are ordered with the Extend-a-Gun feature.
“It’s a universal problem that everyone has these days with clearance of fire trucks,” he said.

Every model produced by Task Force Tips also has the capability of interfacing with the truck manufacturer’s onboard communication system.

“The industry is moving toward large touch screen CRTs at the pump panel with most of the functions of the fire truck displayed,” Carringer said. “It’s good to have feedback of where the monitor is, what position it’s in, and what it’s doing.”

Jeff Benson, global products manager of master stream and valve products for Akron Brass Company in Wooster, Ohio, said his firm makes manual and remote-controlled monitors and deck guns from 30 gpm up to 5,000 gpm for some industrial applications.

Benson noted that Akron Brass started out with hard-wired control systems with motors placed on board the monitor and cables running back to the control box to take control input from different parts of the vehicle. Akron started making its first wireless control units five years ago.

Akron’s wired control systems have the capability to integrate with a vehicle multiplexing system similar to the J1939 CAN-bus system.

Benson said Akron Brass wireless control units resemble a large handheld calculator with membrane buttons. “In addition, we can make joysticks that interface with the module,” he said. “The range on the wireless units depends on conditions, but a line-of-sight receiver can get a quarter mile.”

The wireless units control all the basic functions of the deck gun, he said, from fog to straight streams, as well as advanced features, such as the ability to oscillate the monitor in a predetermined pattern for exposure protection and automatic stow, deploy and park for preset attack positions.