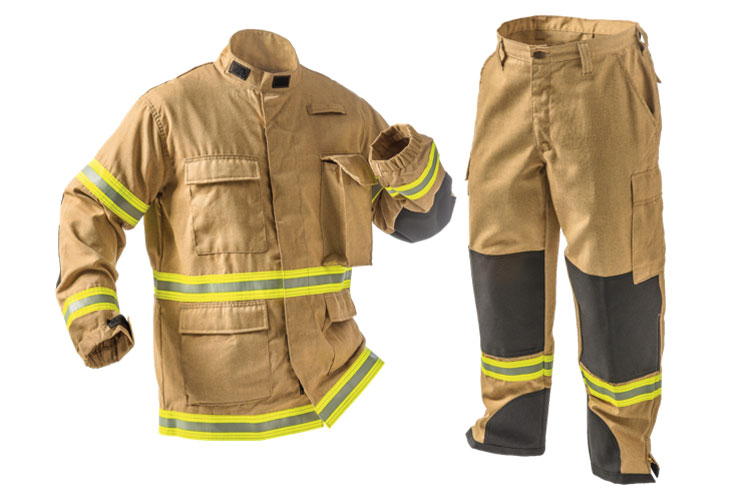 Additionally, statistics show that more than 50 percent of all firefighter line-of-duty deaths (LODDs) in the past decade were caused by cardiac failure following excessive heat stress exposure. The numbers don’t lie, and I’m pretty confident that our jobs are dangerous enough dealing with the life-threatening hazards we respond to. The life-threatening hazards that we as firefighters need rescue from are those that we can’t see, like occupational cancers and heat stress-related cardiac issues. We owe it to ourselves, and especially our loved ones, to become educated and do what we can to minimize our exposure on the fireground (while still committing to aggressively fighting fire).

The science also shows that we are routinely exposed to the carcinogenic toxins of smoke and soot not only through inhalation but also through exposure via bare skin – on the head, face, and neck. Think about it: When we come off of air at a fire, we are typically hot and sweaty from exertion and heat exposure, right? We get clear (best practice), pull our helmet and our hood, and remove our self-contained breathing apparatus (SCBA) mask prior to “opening up” our personal protective equipment (PPE). As you envision this process, where is the least protected part of your body while you fight fire? The only thing that protects our face, ears, and neck is that single-layer hood. Most everything else that we wear has some combination of thermal and moisture/particulate barriers built into it, such as our turnout gear, our helmets, and our SCBA masks.

Since the beginning of (firefighting) time, we used this to our advantage. When we felt our ears starting to roast, it was time to back off or back out. That’s because that thin hood we wear allows us to feel excessive heat on our faces. Unfortunately, those hoods are also permeable enough to allow the aforementioned toxins to permeate the fabric and come in regular contact with the skin on our faces and necks.

When tones drop in the firehouse or volunteers’ pagers go off for a response, our heart rates automatically increase. Endorphins are released into our body, and we are off to the races. We then turn out in bunker gear that is designed to protect us from the properties of fire. As soon as we don our gear, our core body temperature rises, even before we begin to physically exert ourselves on scene. From that moment on (provided we are wearing our gear properly), there is very little opportunity for that heat (and increase in core body temperature) to be released or reduced until the call is over or we get a chance to “open up.” But what about those areas of the country where “opening up” doesn’t really help, in part because of the hot and humid weather conditions?

I recently returned from a live fire training assignment in southern Vietnam. The temperature was 99°F, with 99 percent humidity. There was absolutely NO relief from the heat. This experience was a change for me, as I am used to the warm but dry summer weather in the Rocky Mountains. While in Vietnam, I experienced extreme heat stress, but this time (as a result of the research for this article) I paid very close attention to what was happening to my body. Even though I was in a very controlled training setting, I could feel my pulse rate increase just by putting on full structural turnouts in those weather conditions. I was drenched with sweat before we ever made it into the burn rooms with our students. Add the 500-plus-degree heat of the fire and then the repeated banking down of the steam and smoke. Each time we exited the building and “opened up,” there was little relief, as the weather did not allow for any cooling through sweat evaporation. It was the first time in my career that I really paid attention to what was happening to my body in that environment. Endorphins are “wonderful” excretions that allow us to “get after it,” usually without regard for what is happening to us physiologically.

So now that we’ve defined the problems, let’s look at what the fire industry manufacturers are doing to address these issues.

A number of PPE manufacturers are working on new hoods with particulate barriers sewn into them, which are in various stages of production. One of these companies is Fire-Dex/TECGEN, which now has the “Interceptor Package” and its latest line of turnout gear, both designed to address these critical issues.

Interceptor Package: features PPE to combat both the number one (cancer) and number two (heat stress and cardiac fatigue) causes of firefighter-related deaths. Todd Herring, Fire-Dex/ TECGEN director of marketing and sales, says, “By bundling our FXR turnout gear, TECGEN PPE, and H41 Interceptor Hood into the Interceptor Package, Fire-Dex is addressing both cancer and cardiac stress concerns in a comprehensive and affordable way for fire departments to protect their members.”

H41 Interceptor Hood: made with a layer of DuPont Nomex Nano Flex inside that acts as a filter to reduce firefighter exposure to persistent fireground carcinogens and other contaminants. This material is being sewn between two layers of knit 6.0-oz PBI/Lenzing (20 percent/80 percent) to provide the maximum performance for particle barrier filtration, comfort, and thermal and flashover protection.

The Firefighter Cancer Support Network (FCSN) puts it best, “Many firefighters only have one set of gear, which means they are continually recontaminated from previous fires.” Yes, contaminated. It may be hard to stomach, but you have to treat your gear postfire as contaminated; there are toxins and harmful particulates trapped in your gear until washed out.

A second set of turnouts is probably not in the budget and is also unnecessary for 90 percent of the calls you go on.

TECGEN PPE: designed to be worn as daily PPE – it’s only one layer of TECGEN’s lightweight, breathable fabric, and is dual compliant to NFPA 1977/1951 (Wildland/Search and Rescue). TECGEN PPE is suggested as a daily PPE to minimize your exposure to the carcinogens trapped in your bunker gear between cleanings.

TECGEN 71: turnout gear that combines the best of Fire-Dex and TECGEN technologies. Basically, this new gear fuses TECGEN outer shell technology with the thermal protective performance of Fire-Dex FXR inner liners. The combination of these two technologies is said to have resulted in “the most lightweight, thin, and flexible fabric composites with the highest thermal heat loss (THL) ever seen in the fire service, all without sacrificing thermal protection.” The TECGEN 71 composites vs. typical combinations of composites are advertised to be 15 percent lighter, 40 percent thinner, and 70 percent more flexible and have a 48 percent higher THL, which is the amount of heat that is transferred out of the gear and away from the firefighter in an attempt to reduce heat stress. This is all said to happen without sacrificing thermal protective performance.

Herring adds, “As for the gear, we are so excited about it. It is the lightest, most flexible, most breathable, highest THL turnout gear ever in the U.S. fire service. And, we didn’t sacrifice thermal protection to do it. We could have gone the other way and made the most thermally protective gear ever, but we believe we already have enough protection. Maybe even too much. We need lighter gear, we need to try to reduce the dramatic rise in core temps you experience when doing your job, which includes a lot more than fighting fire! I think you’ll see how our product development philosophy all starts to fit together as we talk about heat stress reduction and carcinogen protection being the main focus.”

I know that we all have our preferences in our brands of turnout gear. I find it more than encouraging that manufacturers such as Fire-Dex/TECGEN are working to help us live longer and to be able to fight (fire) another day.