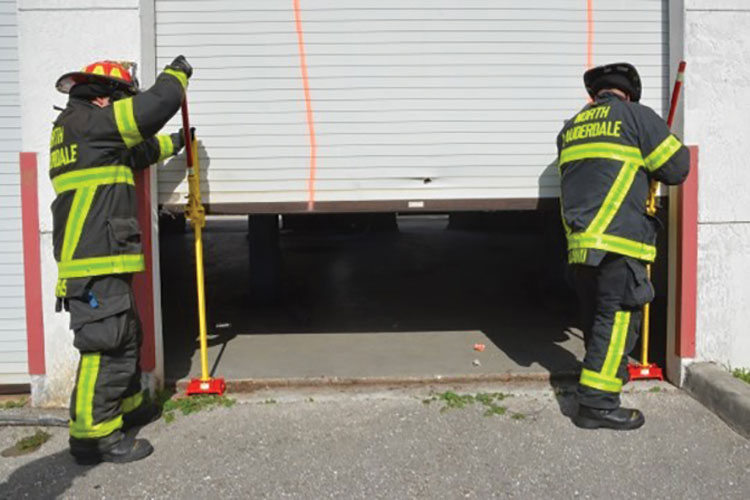 Many districts across the country have overhead steel roll-up doors in their first due, usually at warehouses or auto repair shops.

These doors are easily identifiable by their interlocking galvanized horizontal steel flat slats that ride heavy-gauge steel channel guides on both sides. These channel rails are normally housed in a concrete wall. To gain access, the traditional method has been to use a K-12 rotary saw using several different cuts and techniques. This is the preferred method when you have a suspicion of or a confirmed fire behind the door. It offers great ventilation and attack access, but this method causes extensive damage and requires that the building owner incur a significant repair cost.

But for those instances in which you may have the luxury of taking a gentler approach, you can save the property owner both money and hassle by lifting the door rather than cutting through it. An example of this could be an automatic alarm at a muffler shop in the middle of the night. After a thorough 360-degree scene size-up, the company officer suspects a broken sprinkler pipe run. On closer inspection, the door is identified as a steel overhead door with sliding lock.

Another option that has proven to be simple and fast is using a Hi-Lift First Responder jack on steel flat slat-type overhead roll-up doors as an easy alternative to any cutting operation. This technique provides full access opening of the door using a controlled movement as well as minimal damage to the door itself. These slated type overhead doors are generally designed to have a slide type locking mechanism and keeper located at the bottom sides where padlocks can be placed (photo 1). Don’t rely on this to be accurate 100 percent of the time, as many owners will devise their own crafted lock alternative to secure the door. Fortunately, this jack technique can force its way past most of these deterrents, ripping the keeper or breaking lock attachments if secured to the side rails. As with most forcible entry situations, the lock is always stronger than what it’s mounted to.

It is important to point out that when forcing any door to make entry into an unknown immediately dangerous to life or health (IDLH) environment, it is recommended to always have full personal protective equipment (PPE), including self-contained breathing apparatus (SCBA) and a charged hoseline with crews in place for protection of the forcible entry team as well as delayed entry once the opening has been secured.

Step 1: With a hoseline in place and crews in full PPE including SCBA, create a purchase point/access opening in the middle area of the door through a single slat roughly six to nine inches off the floor. This height measurement may change if you add 4×4 wood cribbing to the bottom of the jack for extra security footing/stabilization on sloped surfaces. Creating a purchase point/access opening can be accomplished with a halligan or pickhead ax. This example was completed here using the point of the halligan placed against the slat and a flathead ax for striking. The access opening may have to be adjusted wider and the tool bent downward to create a protruding lip on the slat for the jack to lock onto. The key here is to create a small dimple that the jack can bite into. It was surprising how small this hole could be and continue to safely work.

Step 2: Place the jack as close to the door as possible and slide the tongue of the tool into the purchase point access opening. Lock the position lever of the jack to engage the lifting arm. The base of the jack may have to be rotated to facilitate placement, which is easily accomplished with pull pins.

Step 3: Engage the operating arm of the jack, which can be controlled by one or two personnel depending on the resistance experienced. The First Responder Jack has a lift capacity of 5,000 pounds. The operation of the arm should be controlled and uniform, making certain that a complete full movement upward and downward of the arm is achieved to fully engage and release the drive mechanism of the tool. As the tool mechanism rises, the slats of the door bind up and arch slightly, eventually pulling or breaking the slide latches away from the keeper or lock. Do not forcefully blow the door upward as the team should always be ready and cautious, raising the door slightly at the start to prevent any type of forceful IDLH product discharge, vent-enter point ignition, or other preventable thermal balance type disruption.

Step 4: Once the desired height has been achieved, set another jack at either side against the channel rail for optimal safety. Once the second jack is set, you can now slide the first jack to the other side. This will provide unobstructed entry. As an additional safety option, a second jack can be set to the other side of the doorway opening against the opposite side channel rail for secondary support.

Under optimal conditions and with the proper application of the Hi-Lift First Responder Jack to raise an overhead roll-up door, the minimal damage applied may allow for the door to close properly after the completed operation. This will allow the crew to secure the structure before leaving. With the channel rails undamaged, the door and the slide latches may still function correctly, with the main damage being limited to a single door slat. This will allow for a less costly repair than alternative methods. Like any method, this also has its limitations, namely the presence of a padlock or alternative locking device that could tear the keeper from its seat, which is still a less costly repair than cutting door slats. When the slide locks are at ground level, this method works well. But as the locks sit higher in the channel rail, the effectiveness is reduced as it reaches the limits of the jack’s throw.

While this may not be practical for every situation for forcing an overhead roll-up, it is another option to consider for your tactical toolbox. The proper application of this technique can provide extremely useful and provide rapid entry operations for that call where “less forcible entry” may be required. The property owner will appreciate it, and the engine company will be back in service in less time.

EDWARD MONAHAN is a lieutenant with North Lauderdale (FL) Fire Rescue and has been with the department since 2003. He also serves as the training officer for the department. He is a fire instructor at the Broward (FL) Fire Academy. Monahan also hosts www.firefightergotoguy.com, a Web site focused on PPE and equipment reviews.

Deal (NJ) Gets Fire Equipment Thanks to FEMA Grant