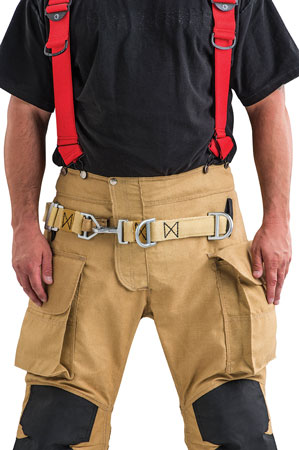 Firefighters in departments around the country are making greater use of personal safety equipment-from harnesses built into bunker pants, to separate harness systems, to systems built into their self-contained breathing apparatus (SCBA).

She adds that Lion now uses a hook as an anchor point for the Personal Rescue System, because “most departments are choosing to use a hook, although the carabiner is still an option with the system.”

Alysha Gray, Lion’s product manager for fire PPE, says Lion recently developed a new Class II harness to address firefighter needs. “Lion’s 2015 integrated Class II harness is still integrated into the turnout pant, which keeps it protected from the environment and snag hazards,” Gray says. “It now has an adjuster buckle in the back and on the leg loops, and we’ve added a sliding D ring to connect to the carabiner in the Personal Rescue System in the bailout pocket. We heard from firefighters that a sliding D ring would make the use of the harness easier.”

With the Lion harness, the adjusters are in the back of the unit to set the leg loops. “They are meant to be adjusted for the individual,” Gray notes, “and then don’t have to be adjusted again. Once the firefighter dons the gear, he only has to cinch the adjuster in the front of the pants.”

George Krause, regional sales manager in the Northeast for Globe Manufacturing Inc., says all the personal safety manufacturers in the industry have had to evolve since fire departments started using external harnesses. “Our pant belt loops can capture an external harness if that’s what a department is using,” Krause says, “but with an external harness, you have the potential for catching on things and possibly damaging the external shell of the pant.”

Krause says that by putting a Class II harness inside the turnout pants, as Globe does in its IH Ready Pants, the harness is protected and is ready to use as soon as the pants are donned. “We removed all metal fasteners and adjusters from the harness because we didn’t want anything to damage any of the three layers of the turnout’s protective envelope,” Krause points out. “The Series 2 system works on floating leg loops that, when they are put onto load, can slide on the waist belt to pull up into a seat for the firefighter.”

Besides the floating continuous leg loops, the IH Ready Pants’ internal Series 2 harness uses a hook-and-D-ring closure and an auto-lock carabiner. “The firefighter has access to the exterior pockets of the pants, and there’s not a lot of bulk because it’s made of flat webbing, making it more comfortable to wear,” he adds. Globe also makes a Series 1 internal harness with floating leg loops and a low-profile waist buckle and an escape belt that replaces the standard belt closure on the turnout pants.

Jeff Koledo, senior regional sales manager for Fire-Dex, says that his company makes both an internal pant harness (IPH) and egress pockets to house descent devices. “We are in the midst of completely redesigning and reengineering our Class II IPH, which is installed between the outer shell and the inner liner of the pant,” Koledo says. “We have industry-leading firefighters and trainers to help us in creating an IPH that’s firefighter-friendly, simplistic, can be used with the least number of steps, and is lightest in design.” Koledo says Fire-Dex will introduce the redesigned IPH at FDIC International 2016 in Indianapolis, Indiana.

Fire-Dex’s egress pockets are designed to house the descent devices made by four manufacturers: Petzl, Sterling Rope, CMC Rescue, and RIT Rescue, Koledo points out. “There are four different egress pocket systems, each tailored to a specific descent device or to a generic device design,” he says. “When we designed the egress pockets, most fire departments were using external harness systems, and we wanted to be sure the equipment they used wasn’t bulky or a snag hazard when in use,” Koledo notes.

Jeffrey Shipley, senior product manager for first responder respiratory products at Honeywell First Responder Products, says Honeywell has incorporated its Life Grip ladder and escape belt into its Titan SCBA. “It’s integrated into the SCBA through the hip plate and is removable,” Shipley says. “An adapter locks it in place, and it can be changed out in two to three minutes. It’s available in four sizes.”

Michael Laton, Honeywell’s product manager for structural and proximity garments, says Honeywell also makes two Class II integrated harness systems, the Patriot and the Spider. “The Spider has the industry’s first externally adjustable leg loops,” Laton says, “and uses an A-frame system that provides a little more stability for the firefighter and allows him to find a center of gravity more easily. The Patriot provides for the use of a tether and ladder hook that attach directly to the belt and is less bulky because there is no A-frame material.”

Laton points out that Honeywell is introducing a new harness, the Atlas. “Essentially,” he says, “Atlas is a Life Grip ladder and escape belt with an A-frame attachment.”

Scott Safety also has a self-rescue belt that integrates with its SCBA. The EZ-Scape Pro™ features a design that is based on feedback from firefighters. It offers an National Fire Protection Association (NFPA) 1983, Standard on Life Safety Rope and Equipment for Emergency Services, rated attachment point and works seamlessly with the Scott Air-Pak X3 SCBA. It fits and adjusts in the same manner as the current waist strap of the Air-Pak X3 SCBA. When coupled with the Scott Multi-Use Ladder Strap, the EZ-Scape Pro can be used for applications such as down firefighter carries, no-rope bailouts, lowering, and a ladder strap.

Matt Hunt, rescue safety market manager for Sterling Rope, says Sterling has been focusing on lightening up and slimming down personal escape equipment. “Some firefighters complain the systems are too heavy or bulky, so we want to lighten them up and add in more safety features without impacting the performance of the product,” Hunt says.

In the personal safety realm, Sterling Rope makes the F4 escape device. “It’s auto locking, so if you let go of it, it will do its job and lower you down,” Hunt observes. “The F4 is lightweight-about six ounces, is affordable, and meets NFPA 1983 (2012 ed.).”

Sterling Rope also offers the Bolt Belt, an escape belt without leg loops. “It’s lightweight and low profile and integrates into turnout gear pants with belt loops, which hold the belt in place,” Hunt says. “The Bolt Belt is universally sized, simple to adjust, and easy to attach to turnout pants.”

Hunt says Sterling also makes a Pocket Bag for storing and stowing escape equipment. “Historically, a bag attaches to the belt, or bunker pants are modified for a slot to carry the hook and rope,” he points out. “Our Pocket Bag slides into a bunker pant pocket where it mates to [a hook-and-loop fastener] to hold the pocket closed. The Pocket Bag has a small protruding tab that can easily be ripped open if it’s needed.”