Karen Lehtonen, vice president of innovation and product development for Lion, says Lion offers a Class II harness integrated into its turnout pant that attaches to a firefighter’s bailout kit. “The harness is integrated into the pant and is removable for laundering,” Lehtonen points out. “It goes through welts in the front of the pant, and internal loops hold the harness in position. It can be set up left to right or right to left depending on which side the customer wants the escape system< on.” 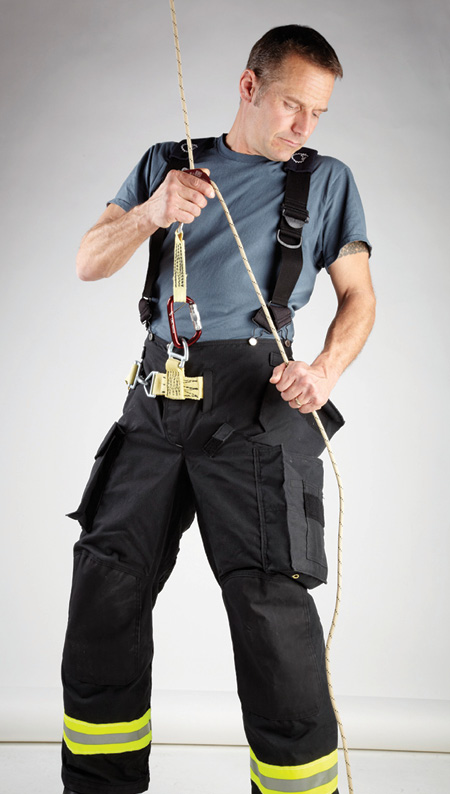 1 Lion integrates a Class II harness into its turnout pant that attaches to a firefighter’s bailout kit. Lion also makes variations in the turnout pant pockets to carry the escape kit. (Photos 1 and 2 courtesy of Lion.) 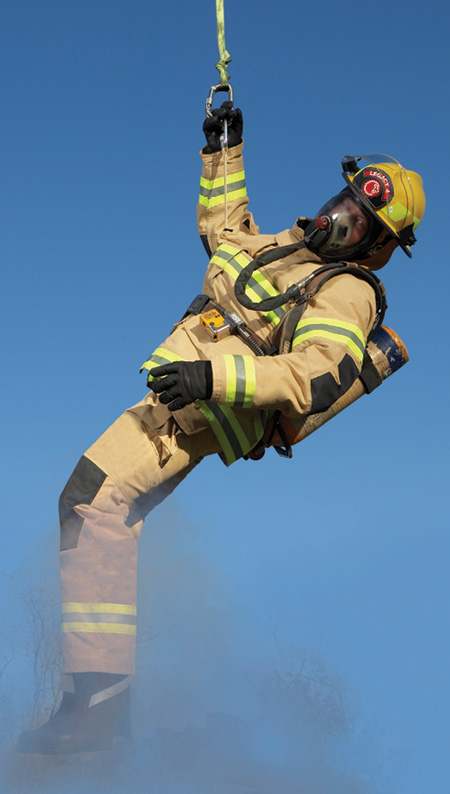 Lion also makes several variations in the pockets on its turnout pant, one being a removable pocket that also can serve as a throw bag, a version that allows rope to be stacked at the bottom, and others that have a pocket for an anchor hook. “They all interface with our bailout kit that includes 50 feet of CMC ProSeries™ Escape line, a CMC Escape Artist™ descent control device, a CMC Flash™ Hook Escape Anchor, a stainless steel quick link and tether made of DuPont™ KEVLAR® webbing, and optional CMC ProTech™ carabiners,” she< says.

Jeff Koledo, national sales manager for Fire-Dex, says Fire-Dex designed its I2H pant around a proprietary Class II harness, which is installed between the outer shell and inner liner of the pant so it’s always there when a firefighter needs it. “The I2H has an external belt with a waist strap while the leg loops are internal,” Koledo says. “The benefits are the ease of adjustment to allow the waist to tighten or slacken and also an easier opening and closing< mechanism.” 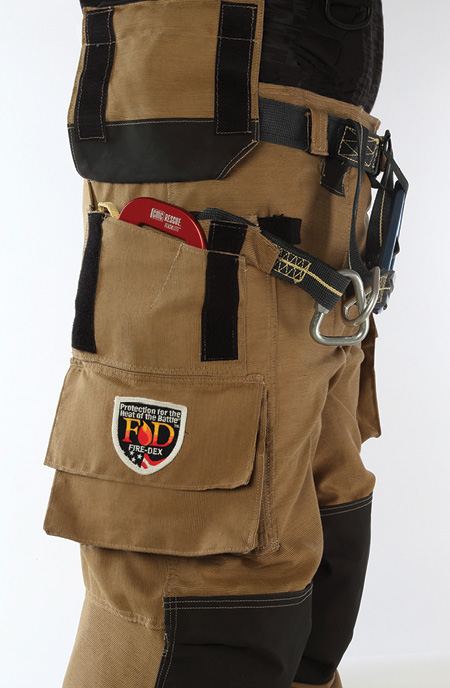 3 Fire-Dex offers a variety of specially designed pockets on the I2H pant, each made to house common personal escape systems. 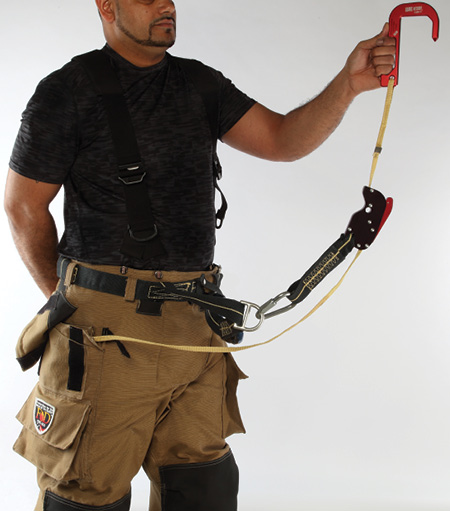 4 This personal escape system is set up attached to the Class II harness in Fire-Dex’s I2H pant.

Koledo says that the I2H pants are an A-frame design with a floating D-ring for better center of gravity and optimal descent position when under load. The I2H pant comes with the harness installed, and the wearer has only to make adjustments to fit the leg loops once and the system is ready to use. “We also will build a turnout pant to work with other Class II harnesses, although we wouldn’t provide those harnesses with the pant,” he< adds.

Fire-Dex also offers a wide menu of specially designed pockets on its I2H pant, he notes, each made to house common personal escape systems on the market. “Our XPEG MULTI pocket features an angled hook slot that can hold either a Crosby hook or an aluminum hook securely and is angled to make access to the hook easier,” Koledo points out. “It’s designed for use with any of the most popular descent devices made by RIT, Sterling, Petzl, and< CMC.”

Matt Hunt, work market manager for Sterling Rope, points out that the personal escape market has been one of the fastest growing portions of Sterling Rope’s business for some time. “We started off with the F4 descent device a number of years ago and had great success with it,” Hunt says, “and we built on the experience with the F4 to create the FCX Descent Device. When loaded, the F4’s handle pops out and you have to squeeze it to descend, but with the FCX the handle is flush, and you have to pull it to activate so there’s no snagging< issues.” 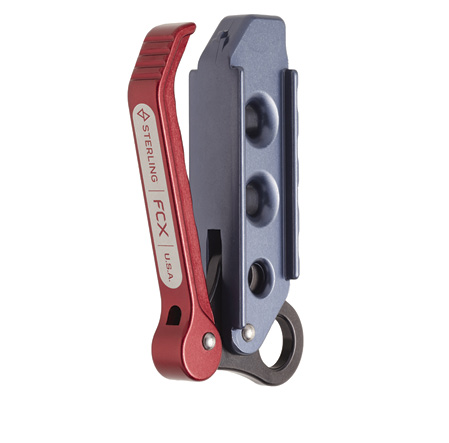 5 Sterling Rope makes the FCX Descent Device that has a flush handle to prevent snagging. (Photos 5 and 6 courtesy of Sterling Rope.) 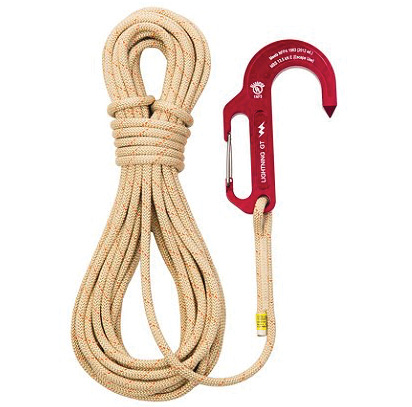 Hunt notes that it’s important how a descent device is integrated into a firefighter’s turnout gear. “If it’s in a turnout pocket, the gap at the corner of the pocket needs to be bridged,” he observes. “If the harness has an extension, you can attach a carabiner, but if there’s no extension, then you can use our Tech Extension lanyard made out of Technora®.” Sterling Rope also offers the aluminum Lightning GT Hook and the Lightning S Hook anchors. The Lightning GT has a carabiner-style gate on the back of the slot to easily create a remote anchor, while the Lightning S has a solid aluminum back. Sterling’s descent devices and hooks can be custom combined into its FCX Escape Systems that use 7.5-millimeter (mm) FireTech2 100 percent Technora escape rope in various< lengths.

Michael Goulet, national sales manager for Petzl, says that Petzl’s EXO personal escape system was developed in 2005 for the Fire Department of New York. That system has evolved into the EXO AP Personal Escape System that uses an EXO AP self-braking descender that has an antipanic function. “The self-braking system allows for a rapid horizontal movement of going out a window and controlling and stopping a descent,” Goulet points out. “If the user pulls too hard on the handle, the antipanic function brakes and stops the descent automatically, and the user has to pull past the antipanic location to begin to descend< again.”

7 Petzl makes the EXO personal escape system that has an EXO AP self-braking descender with an antipanic function. (Photos 7 and 8 courtesy of Petzl.) 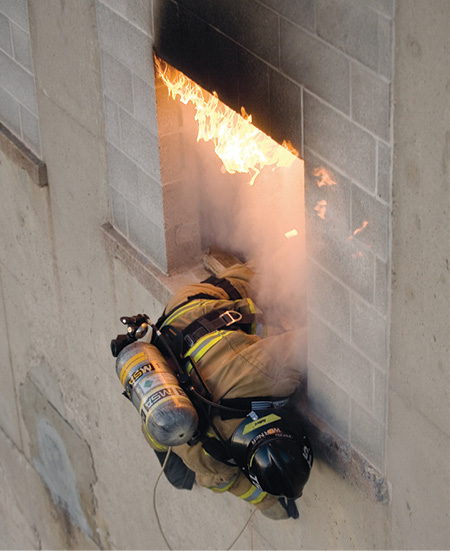 8 A firefighter bails out of a window using the Petzl EXO personal escape system.

Goulet says the EXO AP Personal Escape System comes with 50 feet of 7.5-mm Technora rope and can be furnished with an EXO steel hook or an Am’D connector with CAPTIV positioning bar to help keep the connector correctly positioned and integrated with the descent device, all in a fire-resistant bag that attaches the system directly to a< harness.

Ole Kils, lead engineer for CMC Rescue, notes that CMC launched its LEVR™ Escape System at FDIC International 2018, calling it a “complete redesign of our Escape Artist bailout system. In the redesign, we focused on several main functional requirements,” Kils says. For edge transition functionality, CMC designed its descent device to be able to traverse sills and window edges while loaded, preventing a firefighter from getting stuck, he says. “If a firefighter has time to set a remote anchor instead of using the windowsill, the horizontal axis payout force on the system has to be less than 20 pounds according to NFPA 1983, Standard on Life Safety Rope and Equipment for Emergency Services,” Kils adds. “Our payout force is only four pounds, which makes it easier to get to a window and bail< out.” 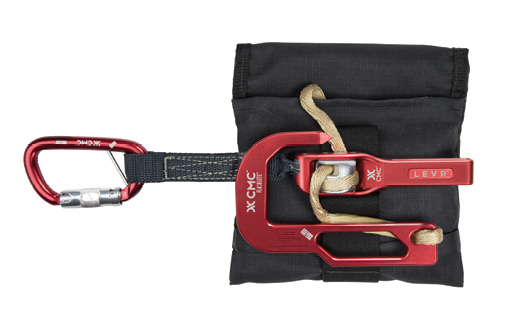 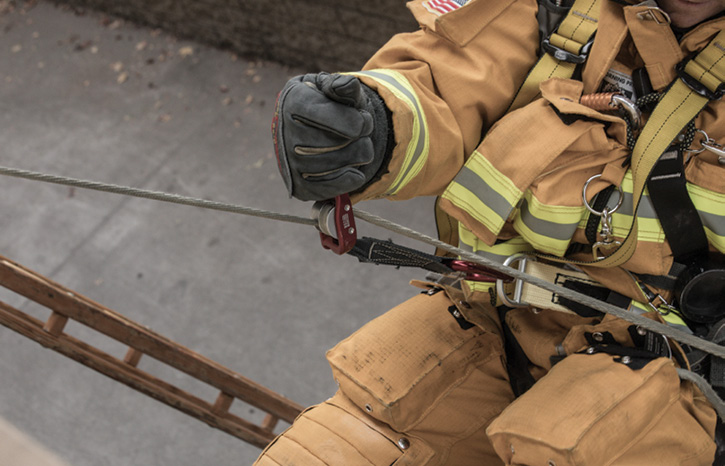 Discussions with fire department personnel and its own staff showed that firefighters had a big concern with the size of bailout systems, Kils says. “The small size of our system makes it extremely compact, prevents entanglement, and gives more comfort to the user,” he says. “Our descent device is autolocking, is simple to use with a single moving part, and can be used by a single hand. And instead of rope, we use a 100 percent Technora escape web, which packs much more compactly than escape< rope.”

J.C. Colorado, chief executive officer of Fire Innovations, says his company makes several models of escape belts, with its Cheyenne Escape Belt being its most versatile model that meets NFPA 1983. “This custom belt is personalized for the individual and is donned over the turnout coat so personal accessories and tools can be carried on it,” Colorado says. “Our Comanche Escape Belt also meets the 1983 standard and fits waist sizes from 28 inches to 48 inches.” Fire Innovations also makes the Arapaho Escape/Ladder Belt/Class II, a lightweight A-frame escape belt that can have leg loops added to it to create a Class II< harness. 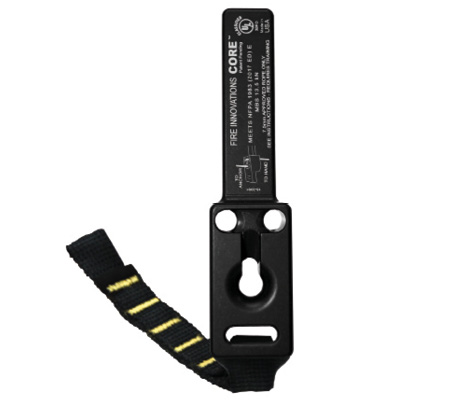 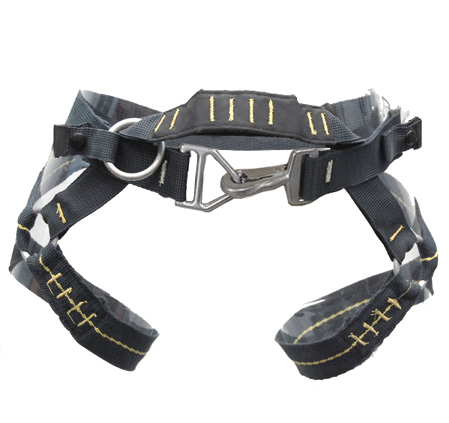 12 The Apache Class II harness is made by Fire Innovations.

The Talon Escape Anchor made by Fire Innovations weighs 7.2 ounces and has replaceable steel tips, a hook pull strap slot, and self-righting geometry. A hitching slot on the Talon’s shank is used for rope anchoring around an object. Fire Innovations also makes the lightweight CORE Descent Control Device that meets NFPA 1983 and carries an eight-inch lanyard to connect the descender to an attachment< point.

Loui McCurley, chief executive officer of PMI Rope, says PMI makes the PED Personal Escape Descender, a unit that has five holes slightly smaller than the rope used that is rigged depending on the firefighters’ weight and how fast they want to get to the ground. “Because the industry is demanding autolocking descent devices and Technora rope, we are coming out with a new escape kit called the Hot XIT Kit, a modification of the D2 made by ISC that has a wider sweet spot,” McCurley says. “The new kit will be offered with either 7.5-mm Technora or polyester rope, customized to length, and also a Petty Hook that is more squared off to the window frame< edge.”