Fire departments are choosing onboard foam systems as standard features on their new apparatus, citing the ease of getting the foam on a fire; the effectiveness of the foam in suppression; and, in the case of compressed air foam systems (CAFS), the ability to make the foam/water mixture more effective.

Mike Dupay, divisional vice president of marketing, fire, EMS, and industrial for Safe Fleet, says the company makes foam systems through its FoamPro® division for fire apparatus in the municipal, wildland, industrial, and aircraft rescue and firefighting markets. “The various systems are quite different in terms of performance and capabilities,” Dupay observes, “with the differences being in the type of proportioning technology used as well as the scale and the size of the systems for the various markets.”

Dupay notes that the FoamPro 2000 series single-point injection system is FoamPro’s most popular model being used on municipal fire apparatus. “The 2000 series is available in two models, differing only in concentrate capacity of 2.5 gallons per minute (gpm) and 5 gpm,” he says. “Each system includes a Hypro triplex plunger pump and DC motor assembly and treats up to 1,000 gpm at 0.5 percent, 500 gpm at 1 percent, and 166 gpm at 3 percent foam concentrate injection.” 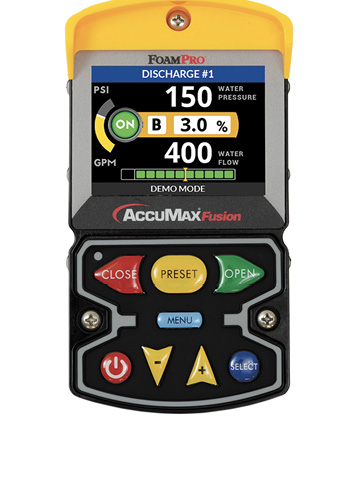 2 The AQUIS™ 1.5 foam proportioner made by Waterous is popular for use on wildland engines. (Photo 2 courtesy of Waterous.) 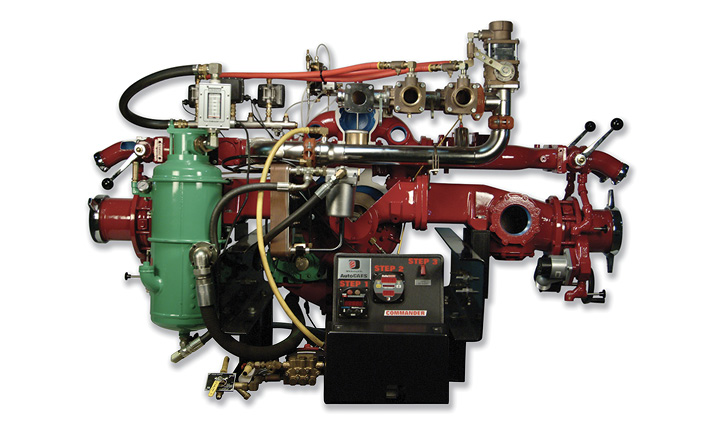 3 W.S. Darley & Co. makes several CAFS for use on fire apparatus, including this LDMBC unit with a single-stage pump running off a midship split shaft and a 220-cfm compressor. (Photo 3 courtesy of W.S. Darley & Co.)

The most popular FoamPro product for wildland fire vehicles, Dupay says, is the 1600 series single-point injection system. “It comes in two models, 1.0 gpm and 1.7 gpm, each with a Hypro twin plunger pump and DC motor assembly, treating up to 340 gpm at 0.5 percent and 170 gpm at 1 percent concentrate injection,” he notes.

For ARFF vehicles, FoamPro makes a FSB electric around-the-pump meter-controlled proportioning system, Dupay says, that has flow meters on both the foam and water supplies. “The system allows different foam flow rates to multiple discharges on the rig, from 10 gpm up to 240 gpm of foam concentrate,” he adds.

Dupay points out that industrial firefighting vehicles use a little different FoamPro system than the direct-injection systems found on municipal and wildland vehicles. “Our AccuMax Fury and Fusion models allow the operator to choose plain water or foam from a discharge and, if foam is chosen, to have the flexibility for a different percentage of concentrate from each discharge,” Dupay says. “The systems support from one to 15 discharges and can flow 20, 40, 60, 90, 150, and 300 gpm of concentrate.” He adds, “The AccuMax Fusion control head provides the operator with both foam and discharge valve control, saving valuable panel space.”

Gregg Geske, director of global sales and marketing for Waterous, says the most popular Waterous single-agent foam system being used on fire apparatus is the AQUIS™ 3.0 foam proportioner that can flow 3 gpm of foam concentrate. “At ½ percent foam, the 3.0 can treat 600 gpm in several lines at the same time,” Geske observes. “The AQUIS 1.5 system is used a lot on wildland trucks and can treat up to 300 gpm at ½ percent. Those departments that want to flow Class B foam usually go with the AQUIS 6.0 system that will produce 200 gpm at 3 percent concentrate and 100 gpm at 6 percent.”

Some fire departments, like Honolulu (HI) and Calgary (ALB), run CAFS on their apparatus to handle structure fires, Geske says, but only about five percent of engines are typically equipped with CAFS. “Many of them choose the ECLIPSE™ CAFSystem that has flow rates of up to 2,250 gpm at pressures of up to 150 psi,” he notes, “as well as our ECLIPSE GEN 2.0 Model 150-ECL that has preset flow rates and preset pressures for water and air, controlled through a touch screen.”

Jeremy Fox, product manager of foam/CAFS for Hale Products, says Hale makes the SmartFOAM direct-injection foam proportioning system with six configurable presets to eliminate the need to remember the proper foam-injection rate for a specific fireground scenario. “The presets on the UltraView display are structure, mop-up, direct attack, wetting agent, hydrocarbon spill, and exposure,” Fox points out, “and they can be modified either before use or on the fly.” SmartFOAM pump models include the Model 1.7A, 2.1A, 3.3, 5.0, 6.5, and 13, which is a dual 6.5.

Troy Carothers, contract administrator and CAFS manager for W. S. Darley & Co., says almost every Darley apparatus coming off the production line has some type of foam system on it, many carrying CAFS. “The Darley CAFS units have belt-driven compressors,” Carothers says. “These models are the LDMBC single- stage pump and 220-cubic-feet-per-minute (cfm) compressor using a midship split shaft; the EMBC 2,000-gpm two-stage midship split shaft pump with a 220-cfm compressor; the PSPCC 1,000, 1250, and 1500, often rear-mount PTO-driven with a 220-cfm compressor; and the HMBC 500/220 PTO-driven unit that puts out 550 gpm at 220 cfm.” Darley also makes the PSMC system with a gear-driven 120-cfm compressor capable of 1,500 gpm, Carothers notes.

Darley’s Odin division, Carothers says, builds CAFS units in a box, most often driven by diesel engines but also available in gasoline versions. “The Mongoose CAFS is pretty popular and available in both gasoline and diesel versions, while the Derringer CAFS is similar but a little bit larger than the Mongoose and driven by a Kubota diesel engine,” he says. 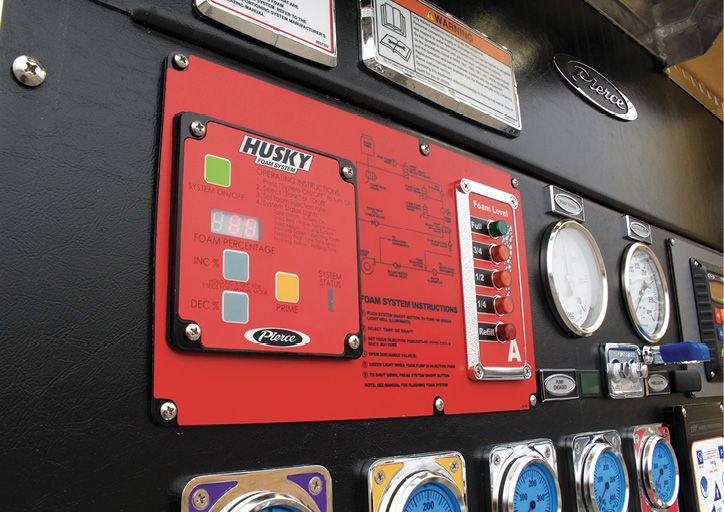 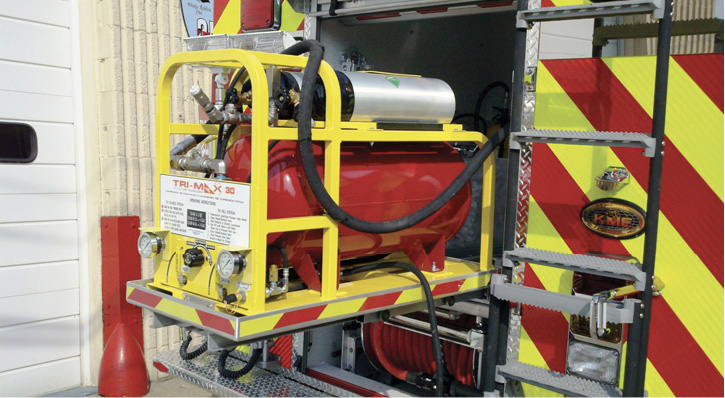 Brian Van Daalwyk, senior product coordinator for fire suppression systems at Pierce Manufacturing, says Pierce’s two most popular direct-injection foam systems are the Husky 3 and Husky 12 systems. “The Husky 3 is a single-agent system that gives 3-gpm foam injection and can handle either Class A or Class B foam,” he says. “The Husky 12 is often used by departments that carry both A and B foam and has an automated flush system for switching between the two types. The Husky 12 has multiple menus on its control panel, while the Husky 3 has a simple four-button control panel.”

Pierce also makes the Husky 30 through Husky 450 industrial foam systems; balanced pressure systems designed for Class A and B foams in 0.03, 0.05, 1, 3, and 6 percent foam concentrations; as well as the Hercules CAFS, Van Daalwyk points out, where the operator turns the compressor on, selects a line, and adjusts the discharge to wet, medium, or dry CAFS.

Steve Tolbert, foam products manager for Trident, says his company makes the Trident Foamate 1.0 ATP (Around-the-Pump) Class A foam proportioning system and the Foamate 2.1 ATP Class B foam proportioning system, which use water flow from the discharge side of the onboard pump that passes through an eductor, creating a vacuum condition that draws foam concentrate into the water stream. The foam/water solution is then sent back to the suction side of the pump, providing foam/water solution to each discharge.

Dave Mahrt Sr., president of Kingsway Industries, says his company makes TRI-MAX CAFS stored-air energy systems for use on fire apparatus. “The TRI-MAX 30 is the model that’s been most popular on rescue trucks,” Mahrt says, “while the TRI-MAX 70 systems have been popular on aerial ladders. The 30 gallons of solution in the TRI-MAX 30 will provide up to 600 gallons of finished foam product and allow a firefighter to overwhelm a fire quickly with high impact.”

Kingsway also makes the TRI-MAX 60 HSS, a 60-gallon skid unit with dual discharges that gives up to 1,200 gallons of finished foam, and the TRI-MAX SUPER-200, designed to fit in the back of a one-ton pickup truck or a trailer and outfitted with 100 feet of one-inch booster line, 100 feet of 1½-inch collapsible hose, and a 1½-inch deck gun, Mahrt notes.

Mike Harstad, government sales manager for Rosenbauer, says Rosenbauer has seen a lot of activity with industrial foam systems. “Some of them are massively complex, using 60-gpm to 100-gpm of foam concentrate,” Harstad says. “We’re building units with 8-inch plumbing and deck guns that have to be supported by pedestals that look like aerial pedestals, which can flow 5,000 gpm and allow for dry chemical injection.”