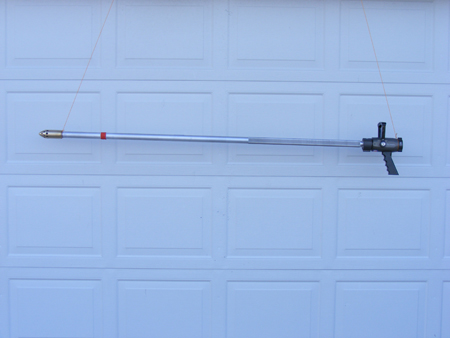 The A-FAST I interior attic nozzle stands about six feet long, has a pistol grip, and 1½-inch ball valve attached to a rigid 1½- by one-inch female coupling. This coupling is attached to a one-inch aluminum scheduled 40 pipe that is knurled for gripping. This pipe is then connected to a solid brass tip. This tip is about four inches long and looks like a bullet. The tip has a series of holes around in three rows. The hole sizes equal about 5½ inches of openings. When flowing, the stream pattern is 360 degrees horizontally. This nozzle weights 8.5 pounds. There is no back pressure on this nozzle flowing approximately 200 gallons per minute (gpm).

The idea for this nozzle is to attack the attic from underneath. If a scuttle hole is not found, then a hole must be made to the attic. Once a hole is established, then the nozzle can be placed into the hole and extended upward as far as a firefighter can reach. Once opened, the nozzle can be moved up and down and sidewise to cover the entire attic. It is preferred that the attic is vented before this operation begins so the steam generated when the nozzle is operated will vent. This nozzle operation should be evaluated after about 15 seconds of operation. If necessary another 15 seconds might be necessary or you might have to move to another room and repeat the above steps as the attic could have compartments.

The A-FAST II “Walker” exterior attic nozzle comes with the same ball valve as the A-FAST I. The coupling to the valve is a swivel so the nozzle can be slid up the roof or ladder and inserted into the vent hole. This coupling is then connected to a one-inch aluminum pipe that is approximately 7½ feet long. The end is bent to a 22.5-degree angle to reflect the average pitch of a roof. The bend is the medium of all pitch roofs of today. This pipe is scheduled 40 and is also knurled for a better grip. This bend is approximately 18 inches long and our normal brass tip is connected at the end. The only difference in this tip is at the bottom row of holes every other hole is inverted 30 degrees upward to keep the nozzle in the vent hole and to reach the peek of the roof line. Water flows are between 150 and 175 gpm, 360 degrees from center. This nozzle weighs approximately 9½ pounds. 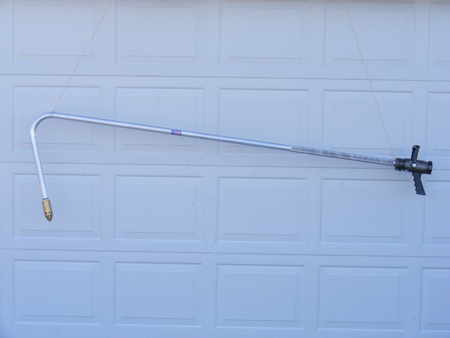 Use caution when using these nozzles in and around energized electrical wires and lines. Like all other tools in the tool box, firefighters must heed the cautions. Power should be cut to the structure as soon as possible. Full personal protective equipment (PPE) is required while using the afast systems.

The A-FAST I and A-FAST II both can be detached from the ball valve, giving the department another nozzle on the fireground. A straight bore tip or a fog nozzle could be attached for mop up. Primary use for the A-FAST I and A-FAST II is for attic fires. It has been suggest that the nozzle systems could be used for dumpster fires, automobile fires, hay bale fires, tractor trailer fires, water curtains, deacon in hazmat situations, and structure fires for quick knock down.


A-FAST Scenarios
Scenario 1: One room, fire visible upon arrival venting through the window. First line off is the A-FAST I and is stretched to the open vented window. The nozzle is opened and becomes a water curtain to protect the firefighter from the heat. The firefighter walks up to the vented window with the line discharging. The line is placed into the window as far into the room as possible for about 15 to 30 seconds. The line should be removed before shutting it down. Note: at this point no other firefighter has entered the structure. This is a one-person attack, although two would be better. The thermal balance within that burn room should have been reduced by 75 percent or more within the discharge time period. 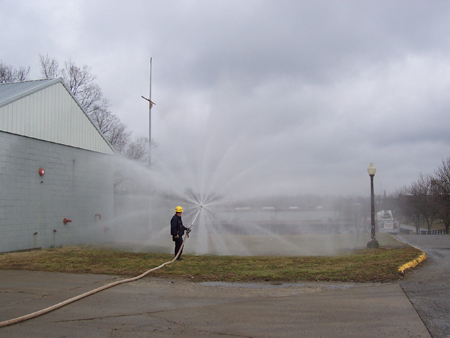 Scenario 2: Three or more rooms fully involved upon arrival. The first line off is the A-FAST I and is stretched to the first window. A firefighter in full PPE then opens the nozzle and advances the nozzle to the first window, where it is inserted the same way as in Scenario 1. After 15 to 30 seconds, it needs to be removed and placed in the second window, followed by the third window. This operation is a two-firefighter operation. The second firefighter should be about 20 feet behind the nozzle person. There is no back pressure at the nozzle, so one firefighter can work the nozzle. Again no one has entered the building. The goal is to knock down the working fire so a manageable overhaul can begin.

Scenario 3: Fully involved vehicle fire. A-FAST I nozzle is stretched to the auto and charged. Foam application is recommended. With the line open the nozzle is placed into the front part of the vehicle and moved across to the other side, then removed and placed in the back seat with the same procedure is applied. Once that is knocked down the nozzle can be placed on the ground in back of the front wheels, moved to the other side of the vehicle, and then moved to the front of the rear wheels and applied again. This should knock down the fire to a manageable level for overhaul.

Scenario 4: Upon arrival at a structure fire known to be a basement fire from dispatch. After a 360-degree sizeup, it is found that there are basement windows on sides B, C, and D. Flames can be seen in all the windows. The A-FAST I is stretched to the first set of windows and is placed into operation extending the nozzle as far into the basement as possible. After 15 to 30 seconds it should be removed and placed in the next set of windows until you’ve completed window advancement on all three sides. The fire should be knocked down to a manageable level for entry. Foam would work well in this scenario. Also the A-FAST II nozzle would work well in conjunction with the A-FAST I if manpower allows this. Certain homes are of balloon construction and caution must be used when overhaul is in progress to ensure that the fire hasn’t extended into the walls and the attic.

These are just a few scenarios covering the use of the A-FAST system.