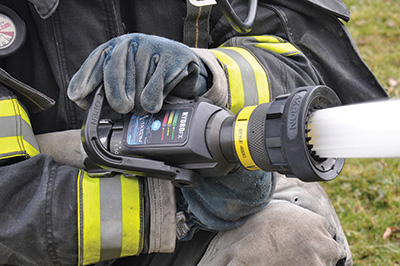 Firefighters must get water on a fire as quickly and efficiently as possible. Manufacturers aim to accomplish that mission with a wide selection of nozzles.

Where Is the Bail?

Rod Carringer, chief marketing officer for Task Force Tips (TFT), says, “Everyone has a different opinion on operational procedures for fire flow,” which means his company has developed a huge number of nozzles to meet firefighter needs. “Our catalog has nearly 2,000 handheld nozzle combinations that we produce,” Carringer points out, “and the possible combinations run into 10,000 when we consider international standards, although 85 percent of our business is from the United States market.”

Carringer says TFT introduced a new nozzle, the Impulse, at FDIC International 2015 last month that integrates a new valve control into its existing nozzle lines. “We’ve removed the traditional bail handle off the top of the nozzle and are using a trigger-style mechanism to control the valve,” Carringer says. “We’re integrating the ability to hang onto the nozzle at the pistol grip and trigger the stream with the same hand.”

The Impulse currently is in prototype stage and field trials of the nozzle are progressing, Carringer says. Impulse will be available in automatic, fixed-gallonage, and selectable-gallonage nozzles, he adds.

Dual-pressure and low-pressure nozzles are the latest trends in handline nozzles, Carringer says. “A lot of departments are moving toward low-pressure nozzles, mostly to reduce the reaction the firefighter feels at the tip,” he says. “In a straight stream, the difference in nozzle reaction at 100 pounds per square inch (psi) vs. 75 psi is a 13 percent reduction for the firefighter. It makes a difference over time if he’s working on a ladder or by himself in a hallway.”

There’s a downside in dropping to 75 psi, though. “You give up reach and penetration,” Carringer says. “It’s the same volume of water coming out, but it’s coming out slower. When you go down to 50 psi, you have a high volume of water but lose the punch of that stream to get to the back wall or the second floor of a structure.”

David Durstine, vice president of marketing for Akron Brass Co., says Akron Brass has made three major changes to its nozzle product line in the past year. It introduced the HydroFX electronic module, added the Avenger series, and offers the Style 1772 nozzle that puts out a 180-degree fog pattern.

“The HydroFX can be used with our Assault fixed-orifice nozzle and our TurboJet adjustable-flow nozzle,” Durstine says. “HydroFX has a sensor that picks up the inlet pressure at the nozzle and ties it into the flow rate, giving the firefighter a visual indication of the flow. The indicator is a three-color LED, with green indicating the nozzle is flowing at the preset rate, yellow meaning the flow is below the rate set, and red indicating below the base set pressure. And any time the flow drops below 35 psi, the indicator flashes red.”

The Avenger is made in selectable-gallonage and fixed-orifice models with a simplified design of lighter components to make it more cost-effective for fire departments, Durstine says. “Some fire departments might not need all the custom changes that some others make to our standard nozzles,” he says. “We looked to make this nozzle platform meet the functionality needed in the fire service but allow for mass production through a simplified design.”

The Style 1772 nozzle is a selectable-gallonage model like the TurboJet, Durstine points out, but was designed originally for the British Royal Navy to fight shipboard fires. “It’s a variation of our TurboJet with a 180-degree fog pattern,” he says. “Stream choices for the firefighter go from straight stream, through various power cones, to a 180-degree fog pattern. At the 180-degree setting, it provides a cooling, protective wall in front of the firefighter and doesn’t allow radiant heat penetration or a fireball back through it.”

Jerry Herbst, strategic development manager for national accounts at Elkhart Brass Co., believes there has been a dramatic change in nozzles over the past couple of years. “We’ve seen a major shift toward constant- or fixed-gallonage-style nozzles,” Herbst says. “The biggest challenges facing firefighters now are the high British thermal unit (Btu) fires. There’s less staffing too, so the challenge is how to get more water on the fire without beating up the firefighters at the tip.”

Herbst says that higher-Btu, new-construction structure fires burn hotter, so flow accuracy is important. “You can’t guess at flow anymore because there’s no margin for error,” he says. “So, departments are promoting a fixed-gallon-per-minute (gpm) philosophy that operates at 50 psi or 75 psi at the nozzle instead of 100 psi. The challenge is to get high volumes of water at lower pressure on the fire so there is less nozzle reaction.”

Break-apart nozzles also are gaining in popularity around the country, Herbst says. “With a break-apart nozzle, the fog portion of a combination tip is threaded into a shutoff that has an integrated straight tip,” he notes. “Both tips operate at the same tip pressure and the break-apart can be done on any of our nozzle models. The typical setup is a 15⁄16-inch smooth bore tip and a 150-gpm fog tip.”

Bob Zerrer, president of Crestar Firefighting Equipment, says some fire departments are choosing to place a different style nozzle on each of its two pumper crosslays. “Fire departments are letting firefighters choose what nozzle they are most comfortable with on their attack lines,” Zerrer says. “We see a lot of smooth bore nozzles on one crosslay and combination nozzles on the second handline. The hard part of that deployment is the training to be sure the operator knows which line is tipped by which nozzle.”

Zerrer says that Crestar’s best-selling nozzle is its Select Flow model, which provides flows of 30 to 125 gpm through a 1¾-inch hoseline. “A lot of our nozzles are purchased by rural volunteer fire departments where water supply is an issue,” he points out. “When they are considering tanker operations and limited water supplies, they are gravitating toward our Select Flow nozzle.”

Steve Larson, owner of S&H Products Inc., says his company makes handline nozzles in the 1½-inch, one-inch, and ¾-inch categories. “We recently had a patent issued on our VSB Tornado nozzle, which has been under development for some time,” Larson says. “For fire departments that concentrate on smooth bore nozzles rather than combination nozzles, the VSB Tornado is a way to duplicate the different orifices of a stacked tip but do so by twisting the barrel instead of changing tips, which allows the firefighter to maintain a high-quality straight stream.”

The VSB Tornado has five settings: 11⁄16, ¾, 13⁄16, 7⁄8, and 15⁄16 inch. “It allows a little more control on the front end of the line for the firefighter,” Larson says. “If you need more volume, you open it up, but if you need more reach or velocity, you crank it down to the smallest setting. There are detents in between each setting.”

S&H Products also makes break-apart nozzles, from ½-inch smooth bore to 1¼-inch smooth bore, Larson says. “They are adapted for forestry and wildland work, as well as being quite effective nozzles for structure fires,” he adds. “A lot of fire departments like the ability to go from fog to straight stream very quickly.”