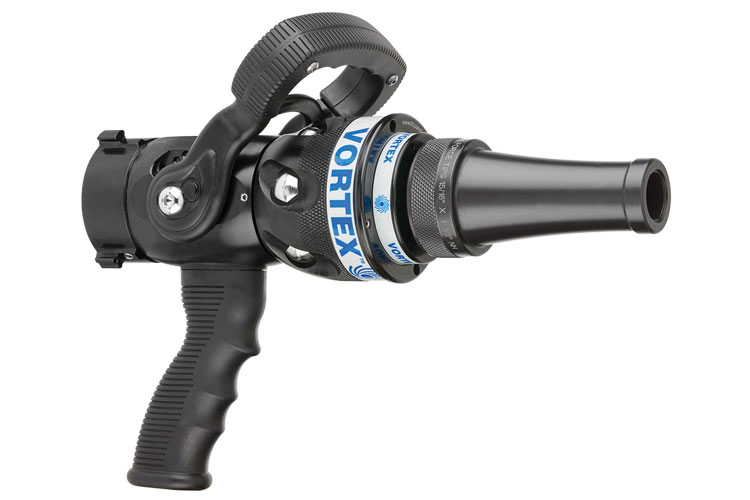 Nozzles and monitors are considered the forward tip of most fire suppression systems, whether they are handlines, deck guns, portable monitors, bumper monitors, blitz lines, or at the tips of aerial ladders and platforms.

Monitor and nozzle manufacturers continue to make improvements to those products, enhancing their roles for both offensive and defensive fire attack.

Andrea Russell, global product manager for Akron Brass Company, says late this year Akron Brass expects to come out with its new UltraJet nozzle, with production beginning sometime in 2017. “UltraJet is an all-in-one nozzle that has the ability to flow a smooth bore stream and also change to a narrow or wide fog stream,” Russell says. “It’s easy to operate because the operation is intuitive: Open and close the bail to start or stop the stream, and use the full grip bumper to change the stream pattern from smooth bore to narrow fog to wide fog to flush pattern.”

Russell points out that the UltraJet nozzle works essentially like a fixed-orifice nozzle in that there is no need for the pump operator to intervene when changing stream patterns. “It provides matching flows in all types of streams,” she says. “You’ll get the same flow out of the smooth bore and fog settings without any pump pressure changes.” The smooth bore is available in a choice of four tip sizes: ¾ inch, 7⁄8 inch, 15⁄16 inch, and one inch. Tips can be changed through use of an Akron Brass tip kit.

Rod Carringer, chief marketing officer for Task Force Tips (TFT), says TFT plans on introducing its new Vortex model nozzle at FDIC International 2017. “We’ve had it in field trials since this year’s FDIC,” Carringer points out. “It’s a nozzle for smooth bore lovers that allows a smooth bore stream with a twist of the wrist to go to a 15-degree dispersed pattern.”

Carringer says that the nozzle has an unusual fin structure inside that, once the ¼-turn twist is activated, takes the smooth bore stream to a 15- to 20-degree spiraling dispersed pattern. “It doesn’t restrict the flow at all,” he adds. “The flow stays the same but gives you a little bit of a pattern because it moves a tremendous amount of air within the pattern.”

Steve Larson, owner of S&H Products Inc., says his company has introduced the VSB Tornado nozzle, a variable smooth bore nozzle designed specifically for 1½-inch and 1¾-inch handlines. “The concept is that a firefighter can get a stacked tip arrangement out of the nozzle by twisting the barrel from one detent to the next, using five settings from 5⁄8 inch to one inch,” Larson says. “We found an elegant way to change the cross section area of the nozzle and still maintain its laminar flow, allowing excellent stream quality on all of its settings.” He adds that there are no fog patterns on the nozzle, which differentiates it from a combination nozzle.

“We developed the VSB Tornado in partnership with WaterShield LLC,” Larson points out. “We also have developed a VSB of ¾ inch up to 11⁄8 inch for a fire department customer.”

Michael Leede, development partner at WaterShield, says the way the VSB Tornado is designed, the aperture can provide any range of settings within the design specifications. “It can be scaled up for larger flows or scaled down if needed,” Leede points out, “for instance, when used for wildland fires or in compressed air foam systems (CAFS). It’s a versatile nozzle that can flow different volumes with different fluids and has been tested very effectively with gels and proven effective with CAFS.”

James Rucker, technical product support specialist for Tyco Fire Protection Products, says the company has changed its HydroChem bumper turret nozzle from brass to aluminum. “It doesn’t put as much strain on the monitor when attached to a truck,” he says. “The nozzle is available from 60 gallons per minute (gpm) to 225 gpm and also will handle five, seven, and 10 pounds of dry chemical per second. It’s available with three different tips and typically will be found on aircraft rescue and firefighting trucks.”

Eric Combs, divisional vice president, product management, Safe Fleet, says Elkhart Brass has introduced two new monitor products: the high-capacity Magnum EXM, a six-inch-diameter monitor that will put out 5,000 gpm (launching this month) and the Ram XD portable monitor (launched this summer), a 500-gpm model that can be used for first-floor deployment at a structure fire.

“The Magnum EXM is the largest monitor we’ve ever made,” Combs says, “and what really drove this development is the industrial market and municipal fire departments looking for farther reach and higher capacity from their monitors.” Combs notes the Magnum EXM is a CAN-bus-RF-compatible monitor, using the same control logic as the entire Elkhart Brass EXM line. “It’s designed to be integrated into apparatus, especially aerial devices, so you don’t need all that heavy control cabling,” he says.

Combs notes that in the past, monitors larger than 2,000 gpm usually were bent pipe and welded tubing, which make them heavy, bulky, and expensive. “We cast and machined this monitor, so it’s more efficient in terms of size and weight, and made its flow more efficient in that envelope.”

With the Ram XD portable monitor, Elkhart Brass increased the strength of the product and responded to firefighter feedback that called for the ability to get a low discharge angle from it. “The challenge with a portable monitor is that the lower the angle, the more reaction force is trying to push the monitor back,” Combs observes. “That can cause the monitor to lose stability, and at some point the reaction force will overcome the monitor. We re-engineered this monitor to the optimum angle to allow firefighters to have a first-floor deployment down between 14 and 20 degrees.”

Carringer notes that electronics are having a big impact on monitors used on aerial devices and on top of pumpers. “The electronics side of things and the ability for TFT to interface with truck original equipment manufacturer electronics packages is where new things are happening with monitors,” he says. “Each fire apparatus manufacturer has its own nuances, which might cause us to reprogram some software for it, which can be like shooting at a moving target at times.”

Additional programming work might be needed to alter an aerial ladder or platform monitor to execute certain commands, Carringer notes, such as preventing damage to the ladder, cab, or body of the vehicle. “A lot of interlocking has to take place to do that safely,” he says. “Or, a manufacturer might want a soft stop for the monitor in one position and a hard stop at another. We give them the tools to modify those kinds of command changes.”

But, a lot of manual monitors are still being used on apparatus, Carringer says. “What’s almost become standard on a municipal aerial platform is a 2,000-gpm monitor with a valve and stacked tips on one side of the platform and a 2,000-gpm remote control monitor on the other side. For industrial platforms, more likely both monitors will be remote control.”

Carringer says TFT also is seeing a lot of preconnected portable monitor use on the back of an engine in place of a deck gun for attack scenarios. “We have seen dual portable monitors off the rear end, usually our 500-gpm BlitzFire, which is a lightweight, quickly deployable 2½-inch attack line that includes an integrated safety system. Likewise, our BlitzForce is a compact 500-gpm monitor, but it has to be tied down because it doesn’t have the safety system.”

Jason Riggenbach, global product manager for Akron Brass Company, says Akron Brass is moving in the direction of simpler, easier-to-install-and-maintain monitors. “We’re putting more sophisticated onboard controls on them that work through the CAN bus system so they are plug-and-play,” Riggenbach says. “Most of the features are programmable, like the park or stow position, deploy, constant oscillation mode, and others. The monitors are programmable each time you use them.”

StreamMaster II is Akron Brass Company’s newest model monitor, incorporating position feedback into it. “StreamMaster II is a smaller, lighter version of our popular StreamMaster monitor,” he says, “and can go up to 2,000 gpm with more features and less friction loss. We use the same materials but maximized the water flow and changed the profile slightly in the StreamMaster II.”

Akron Brass plans on introducing the AeroMaster 12, a 3,000-gpm monitor with all the functionality of a StreamMaster II but designed for larger volume and higher outputs. Akron Brass also makes the deck-mounted and portable Apollo monitor in sizes up to 1,250 gpm, as well as portable monitors like the Mercury Quick Attack at up to 500 gpm and the Mercury Master at up to 1,000 gpm.

Tyco Fire Protection introduced the single swivel Ranger nozzle and monitor last year at 3,000 gpm and the Ranger 3 Plus, which will do 1,000, 2,000, 3,000, or 4,000 gpm, depending on the flow stop chosen. The nozzles are set at 100 pounds per square inch and continually adjust for flow to keep a clean flow pattern, Rucker points out.

Daniel Clark, Tyco’s national sales manager for Williams Operations, says Williams monitors are designed to handle large volumes of water and throw streams long distances. “We have gotten into the municipal fire markets where there are tank farms and refineries,” he points out. “Large facilities like that usually have their own fire suppression equipment, which is another market of ours. Our monitor technology allows Purple K dry chemical to be carried through the water stream, and that HydroChem technology is available in our all-stainless steel Ranger hand nozzles and Ambassador and Battler monitors.”