BY RAUL A. ANGULO

According to Don Abbott’s Project Mayday, the number one reason firefighters call a Mayday is from falling into a basement. Number two is falling through a roof, and number three is becoming disoriented.

The disoriented category includes becoming confused, unsure, bewildered, perplexed, disoriented, or lost. In this category, the number one reason for calling a Mayday is when firefighters become lost or separated from their hoseline, and 55 percent of Maydays are transmitted by the first-in unit.

Engine companies call 52 percent of the Maydays, ladder companies account for 46 percent of the Maydays, and rescue companies or other specialized units make up the remaining two percent. Most Maydays occur around the 20-minute mark of the incident. The disoriented firefighter in zero or low visibility is often within 15 feet of the front door before he turns the wrong way from the initial point of entry. Reports from the National Institute for Occupational Safety and Health also list disorientation as one of the most serious hazards a firefighter will face while conducting interior firefighting operations. These statistics have prompted numerous inventors, many of whom are active firefighters, to look for solutions to this problem.

Abbott’s work on studying and documenting the occurrences of Maydays around the country is quite extensive. Every firefighter should visit the Project Mayday Web site. He knew I worked on the National Fire Academy Mayday curriculum with Dr. Burton Clark (NFA ret.) and Chief Brent Batla, of the Burleson (TX) Fire Department, so when he ran into Captain Jeff Dykes, a 23-year fire service veteran and the inventor and owner of Northern Star Fire and the Northern Star 8-Directional Electronic Compass and Guidance System, he was quick to introduce me to Dykes. Abbot said, “You have to see this product! Of all the gizmos out there trying to address poor situational awareness on the fireground, this is the best thing I’ve ever seen at FDIC International. It doesn’t totally fix the problem of firefighter disorientation, but it comes pretty darn close!” And, he’s right; this is a major step forward in addressing this problem.

The Northern Star 8-Directional Electronic Compass and Guidance System is a small personal safety device about the size of a quarter that adheres to the inside of your self-contained breathing apparatus (SCBA) face piece. Dykes uses peel-and-stick, 3M fire-rated, two-sided tape and recommends placing the compass at the lower part of the lens to keep it from obstructing line-of-sight vision. The compass is a patented directional-awareness guidance system that uses various technologies similar to the type used in compass apps you can download for a smartphone, only using a much more sophisticated microchip. A combination of magnetometers, accelerometers, and gyroscopes work together to filter interference and ensure a reliable and accurate true north heading at all times. The unit refreshes multiple times per second for fast, smooth transitions with no lag time when the firefighter turns his head quickly. 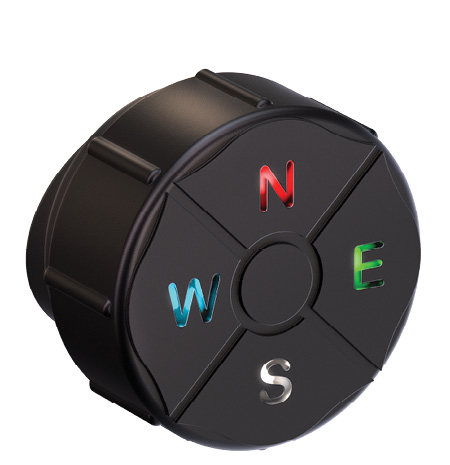 1 The Northern Star 8-Directional Electronic Compass and Guidance System has four colored LED lights. North is red, east is green, south is white, and west is blue. The compass must be installed inside the SCBA face piece so north, red, is always at 12 o’clock; east, green, is at three o’clock; south, white, is at six o’clock; and west, blue, is at nine o’clock. When two adjacent colors are lit at the same time, you are headed northeast, southeast, southwest, and northwest. (Photos courtesy of Northern Star Fire unless otherwise noted.)

The rugged casing is shockproof, heat-resistant, and waterproof. A rubber gasket keeps water and moisture out (IP 67 rated). The compass is firefighterproof but still user-friendly. There is no on/off button because the unit is activated with a tap followed by movement and can be activated while the firefighter is “on air.” The compass automatically shuts off after three minutes of inactivity. A lithium-ion rechargeable battery provides more than seven hours of continuous use from a single charge.

2 The rugged casing is shockproof, heat-resistant, and waterproof. The compass is the size of a quarter that adheres to the inside of the SCBA face piece. There is no on/off button. The unit is activated with a tap, followed by movement, and can be activated while the firefighter is “on air.” The compass automatically shuts off after three minutes of inactivity.

I got a chance to play with one of the compass units and took it down into a couple of underground parking garages. We all know how easy it is to get turned around in an underground parking garage, right? We also know that radio transmission capability is often lost in subterranean structures. I was impressed at how fast it reacted to my movement. The compass has eight directional indicators: north (N), south (S), east (E), west (W), northwest (NW), northeast (NE), southwest (SW), and southeast (SE). There are four directional letters with four corresponding colored LED lights: red for N, blue for W, white for S, and green for E. There is no need to memorize the colors; the color of the light is irrelevant. The key, and what’s most important, is to make sure that the compass is mounted into the face piece with the N and red light positioned at 12 o’clock. The reason for this is that the compass is too close to the eyes to focus and read any letters clearly. Try putting any document up to your nose. It is impossible to read any letters that close to the eye, but the eyes can detect colors and position relative to an analog clock. 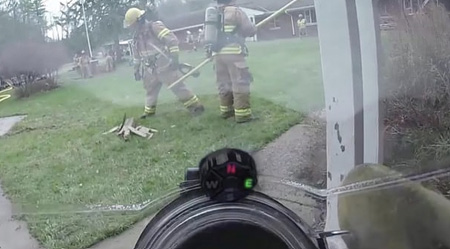 3 The lights on the compass indicate the direction the firefighter is heading. Since the compass is inside the face piece, it is too close to the eye to read the letters. However, the eye can detect the colored lights, but they must be referenced with an analog clock. In this example, the red and the green LED lights are illuminated. So, 12 o’clock and three o’clock are both illuminated—the firefighter is heading NE.

With the implementation of the incident management system, it was recognized that without landmarks, many firefighters had trouble identifying geographical locations. For example, if an incident commander (IC) gives orders to make access using the northeast stairwell, what did that mean? Where’s northeast? So, the designators were changed to alpha, bravo, charlie, and delta (sides A, B, C, and D) with the A side usually being the front of the building. Now, if the IC gives orders to make access using the stairwell on the charlie-delta (C-D) corner, everyone can visualize where it is. Though switching to A, B, C, and D designators eliminated a lot of the confusion, it does not eliminate the need and importance to maintain N, S, E, and W directional awareness. What happens when you go inside a large commercial structure? A, B, C, and D are excellent for exterior reference points, but that reference can quickly be lost after a few turns inside a smoke-filled hallway. 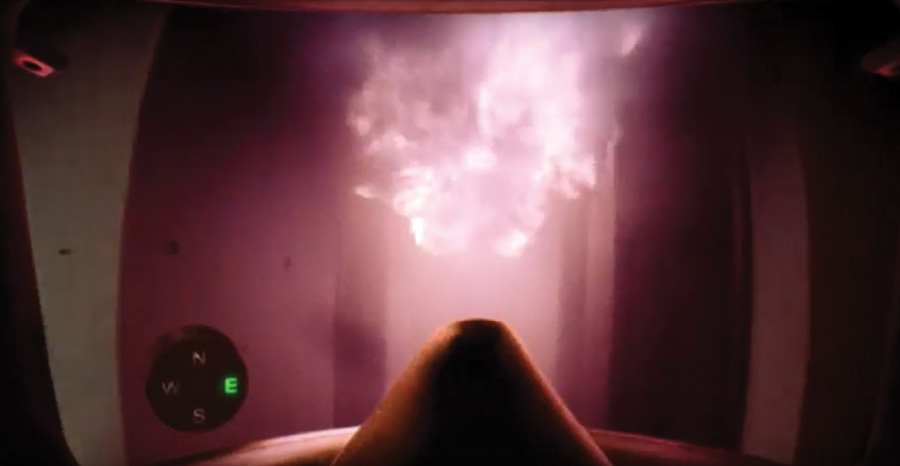 4 In this example, the green light is lit at the three o’clock position, so the firefighter is heading east toward the fire. Assuming the fire attack started on the A side of the building toward the C side, if the firefighter had to make a sudden exit because of a change in fire conditions, he would have to turn around 180 degrees and head west. The light would be blue at the nine o’clock position.

If an entire fire department was equipped with the Northern Star electronic compass, N, S, E, and W designators would still have to be announced with the side of the building. For example, “All units be advised: The bravo side of the structure is north.” Therefore, if the fire attack is initiated from the A side, the firefighter will have to head west to exit the structure at the point of entry. It’s not complicated, but it takes some practice and concentration. But, isn’t your safety worth it? In my opinion, this system is easy enough for any firefighter to master.

Rescue SCUBA divers have also recognized the value of this low-profile personal safety device. SCUBA divers face limited visibility conditions in murky water, and many underwater rescues happen at night. When there are no reliable landmarks, SCUBA divers can also have difficulty determining up from down and right from left.

The subject of the dangers rescue divers and cave divers face has been in the forefront of world news with the successful rescue of the 12 young soccer players and their coach. They were trapped more than two miles inside an underground cave in Thailand for more than two weeks. I was riveted listening to the divers describe how they tried to remain oriented in zero visibility water and darkness. At some point, they even had to remove the SCUBA tanks to squeeze through a narrow passage under water, similar to fire department reduced-profile evolutions to squeeze through a narrow wall space. There are many expensive and sophisticated handheld or wrist-worn compasses for underwater rescue, but if you can’t see the compass through murky water, what good is it? You don’t have to be a rescue diver to appreciate the benefit of having an unobtrusive, unobscured, accurate compass on the inside of your mask. Whether you’re a diver or a firefighter, zero visibility means just that, regardless of the environment. I suspect there would also be a psychological calming effect to having an illuminated and clearly visible compass to help maintain your awareness of position in such environments. 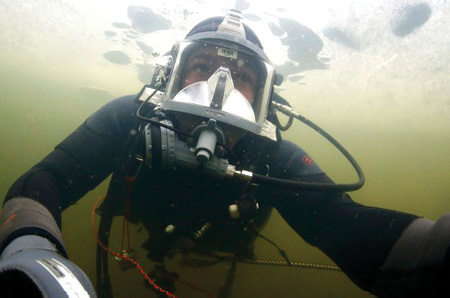 5 Rescue SCUBA divers face limited visibility conditions in murky water, and many underwater rescues happen at night. When there are no reliable landmarks, SCUBA divers can also have difficulty determining up from down and right from left. The Northern Star electronic compass is currently being tested by the United States Navy SEALS in Coronado, California. (Photo by author.)

In open water, the Northern Star electronic compass can help a diver maintain his orientation and confidence while continuously swimming to the objective. This confidence in his personal safety can result in performing efficient search patterns and covering more ground. The Northern Star electronic compass is currently being tested by the United States Navy SEALS in Coronado, California, in addition to some other Department of Defense units. They obviously see value in this system, so fire departments with rescue dive teams should consider taking a look.

Though some U.S. fire academies are testing these units, the Northern Star compass has also piqued the curiosity of the international community. Their fire, police, military, and private industries, like mining companies and recreational diving companies, have recognized the benefits of this simple solution in keeping their people oriented in obscured, restrictive environments. The American fire service shouldn’t overlook this system that was originally designed for it. 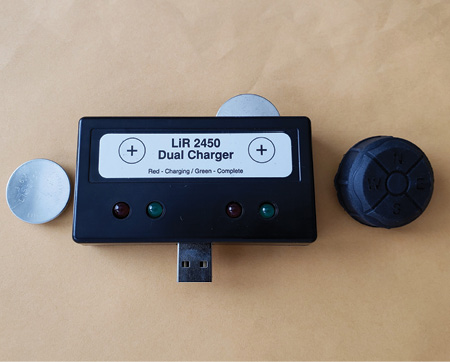 6 A lithium-ion rechargeable battery provides more than seven hours of continuous use from a single charge. Two batteries are included with the compass, but the duo-bank battery charger is sold separately. The battery charger has a USB connector so it can be used with any charger that accepts a USB plug. (Photo by author.)

Top-of-the line SCUBA compasses can cost up to $1,000. The Northern Star electronic compass costs approximately $150, with discount prices for bulk purchases. Two batteries are included, but the duo-bank battery charger is sold separately.

Remember: As cool as these inventions are, they’re simply tools to help us stay safe. They don’t replace the need to maintain individual situational awareness while operating in zero or limited-visibility environments. The best safety system you have is still right under your helmet.

RAUL A. ANGULO is a captain (ret.) of Seattle (WA) Fire Department Ladder Co. 6 with more than 37 years of service. He is an international author and instructor and has been teaching at FDIC International since 1996. He is a member of the Fire Apparatus & Emergency Equipment Editorial Advisory Board.