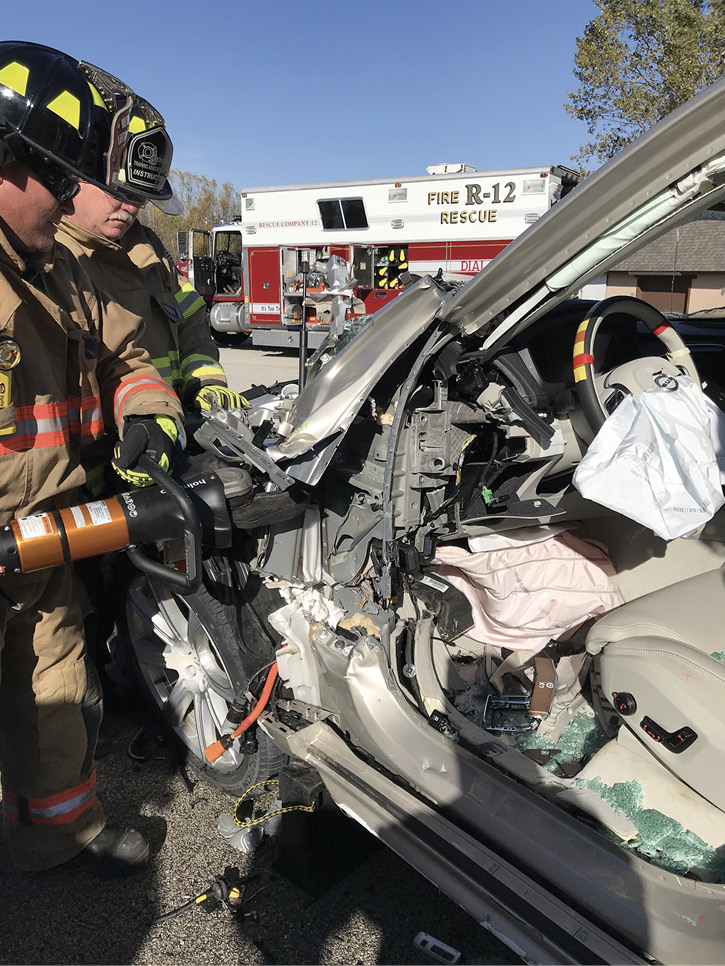 All too often, we take extrication classes that focus solely on the methods and tactics of “making space” as opposed to the underlying information that we need to know to “make space safely.”

Before you get all excited about this being one of those “let’s be extra safe” articles, worry not: There is a method to my madness, and this is not one of those articles.

Technology advances in automaking present a new and dangerous landscape for us to conduct extrication operations in. These very real advances and dangers are all too often left out of extrication programs (I believe) because they involve some classroom time, and classroom time is not anywhere near as sexy in the extrication world as that of hands-on training (HOT) time. Simply stated, there are ever-evolving changes and new things that we should know about before we get busy “making space.” The absence of knowledge about the advances in technology and vehicle construction can cause and have caused catastrophic events at real-life extrication scenes. Also, simply stated, what you don’t know about these things can kill you, your crew, and your patients.

Let’s look at some of the technology that I’m talking about.

I’ve taught on this subject for many years, and although there isn’t the time or space here to get in depth about changes in metallurgy, it’s an important topic to know about before you go trying to rip and tear into a new car. By now, most of us know that the metals that make up new vehicles are very different than those found in the cars we get from junkyards to train on. Some metals are softer and easier to deal with, and some are quite the opposite. For the softer metals, we’ll notice very little, if any, difference in how our cutters and spreaders will react. For the hard metals and alloys, there are two things worthy of mentioning. These metals start out as “ultra-high-strength steel” (UHSS) and can be more than a challenge for many rescue tools. But what happens to that “virgin” UHSS when it’s involved in a wreck that is violent enough to bend or twist it? In the process of the wreck-caused bending or twisting, that UHSS is instantaneously heated, thereby rearranging the molecules in the metal itself. The end result is a version of heat treating often called “work worrying,” which leaves these bent or twisted metal components even harder in form than their form prior to being bent or twisted. If your rescue tools would have had a challenge in conquering virgin UHSS, how will they perform when faced with work-worried UHSS?

1 Trying to find anti-intrusion components to allow for dash lift. (Photos by author.)

Similarly, we know how our tools behave when dealing with older junkyard cars. But, what about how they behave or perform with ultra hard steel or alloys? My experience with these new metals over the past 10 or 12 years shows me that whether things go right or they go wrong when cutting, spreading, or pushing to make space, things generally happen far faster and much more violently as the accumulated hazardous energy is released. If we can’t get good purchase points with our cutters, spreaders, combi tools, or especially rams, it can be a recipe for disaster when, say for example, a ram slips out of place or a combi tool “snap rolls” or violently skews in the blink of an eye and the snap of a wrist. Old junkyard cars don’t pop, bang, and rock (sometimes off of the stabilization) when a cut or spread is completed like what happens regularly when operating on new vehicles. Even things as routine as “door pops” (spreading a jammed door open) happen much more violently on new vehicles. I no longer spread doors off for that very reason. After having had a full-size passenger door (that was being spread off of the hinge) fly five to six feet and strike an officer in the thighs, I always try to cut hinges now and ALWAYS tether doors with a buddy strap or piece of webbing. Learning why these metals and our rescue tools react as they do (instantly) on new cars should be considered important information to learn, right?

2 Grade 11 bolts are more than a challenge for many rescue tools.

Forever, we’ve taught to make sure that the tool operator doesn’t get in a “pinch point” between the vehicle and the rescue tool. With new vehicles, I’ve witnessed that pinch point lookout go bad in the blink of an eye because of how fast the tools react when tasked with today’s new metals and vehicle components. Deglovings, amputations, and worse are now more of a reality for rescuers operating tools on new vehicle technology. Why aren’t these things addressed in today’s extrication classes? I don’t mean to overgeneralize to include all extrication classes, but shouldn’t we be more concerned about the root causes of our challenges and have an understanding of how to be successful rather than learning the latest whiz bang, “named this maneuver after myself” stuff that looks cool? Remember seeing one of us blow all the air bags off in a car at the same time with a nine-volt battery? We learned NOTHING, but it was cool to watch.

3 “Making space” is more of a challenge with new ultra hard metals.

ELECTRICITY IS A TWO-WAY STREET

This is a simple example of something we often miss in extrication programs. We secure the scene, we get our stabilization going, and we’ve done what we need to do to secure the vehicle by disconnecting or killing the 12-volt electrical system to help make the SRS/air bag system safe to work around. Now we’re ready to get busy making space and extract our patients.

Most, if not all, of us use the 12-volt cigarette lighter or USB ports in our vehicles to charge our phones or so that the kids can watch movies, right? Remember my example of back in the day when we used to make a show of blowing all of the air bags in the training cars with a nine-volt smoke detector battery? Our cell phones have lithium ion batteries in them that are far more powerful than a nine-volt battery. Even though we’ve cut the 12-volt system of the crash vehicle to make it SRS/air bag safe, isn’t the power from our cell phone battery that is connected to the lighter or USB port enough to back feed the 12-volt system and arm air bags? If you don’t think so, let me know, and I’ll show you how it happens.

4 Not too many training programs get brand new luxury SUVs to train with.

Finally, when we get on the scene of a wreck, how do we know if the vehicle or vehicles have “Start/Stop” technology (the feature by which the engine shuts off when the car comes to a stop and then reignites when the driver pushes on the accelerator pedal)? How do we know if the all-electric vehicle is “live” or not? After all, we can’t hear or feel if either of these two types of cars are running if they’re stopped. I’m guessing you wouldn’t want your crew approaching a “live” start/stop or full electric car from the front or rear because of this, right? For me, the most unnerving part of start/stop technology that is most unknown to rescuers is that it often operates on a totally independent 12-volt system that has its own power source (battery) and operates independently from the main 12-volt SRS/air bag system.

These are just a few examples of the technology information that we should have and that should be included in extrication training programs before we worry about learning how to “crack the egg.” This same type of information is even more important when it comes to learning about and dealing with electric vehicle fires. Just yesterday, I read posts between two well-known instructors who were arguing over the value of “submersing burning electric vehicles in giant tanks of saltwater” (no, I’m not joking). Should we not be more concerned with the toxicity levels of the hydrogen fluoride off-gassing produced by burning lithium ion vehicle batteries? Here’s a hint: Emergency Exposure limit = 90 ppm × 10 minutes; NIOSH says IDLH at 30 ppm. Fraunhofer Institute testing in Germany shows capture results of 270 to 2,700 ppm of hydrogen fluoride from burning lithium ion batteries. I’ve just got to believe that students of their craft would be better served by learning this kind of critical vehicle fire information as opposed to which dunk tank the burning car needs to be put in.