Hydraulic rescue tool manufacturers have made dramatic changes to some of their units, including lighter weight tools, increased operational capabilities, and new tool designs. Fire and rescue departments are using this new and redesigned equipment on a number of fire apparatus and putting the tools through their paces at motor vehicle accidents and other rescue scenes.

Bruce R. Johnston, director of marketing and product management for HURST Jaws of Life Inc., says the fire and rescue market has been accepting battery-powered hydraulic tools at a rapid pace. “What is driving that acceptance is the high tensile strength of metals used in cars today,” Johnston points out. “Auto and truck manufacturers have increased the tensile strength exponentially, and the vehicles are better designed to cocoon the occupants. These extremely tough metals make it difficult for first responders, and it’s expected that by 2020, 20 percent of all cars will use high-strength or advanced high-strength steel.” 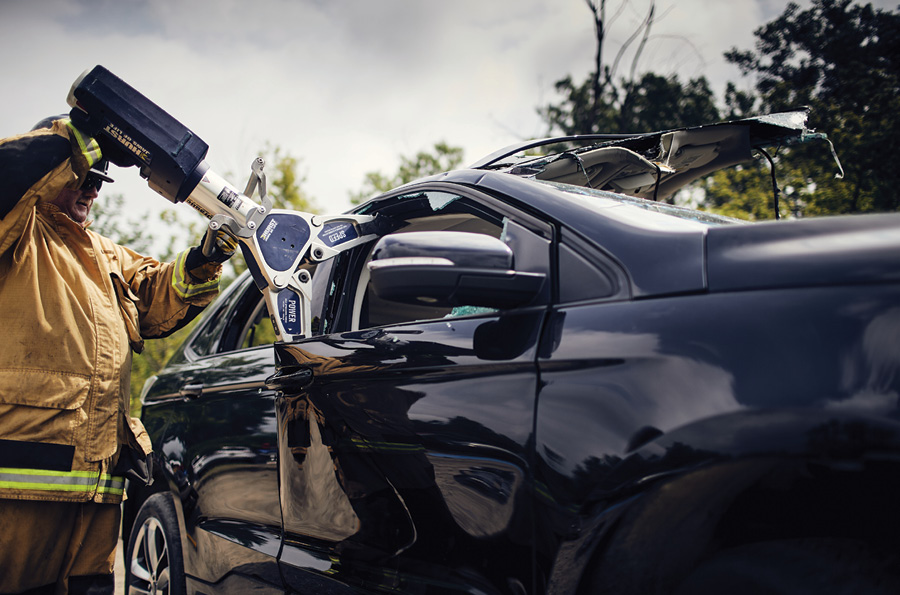 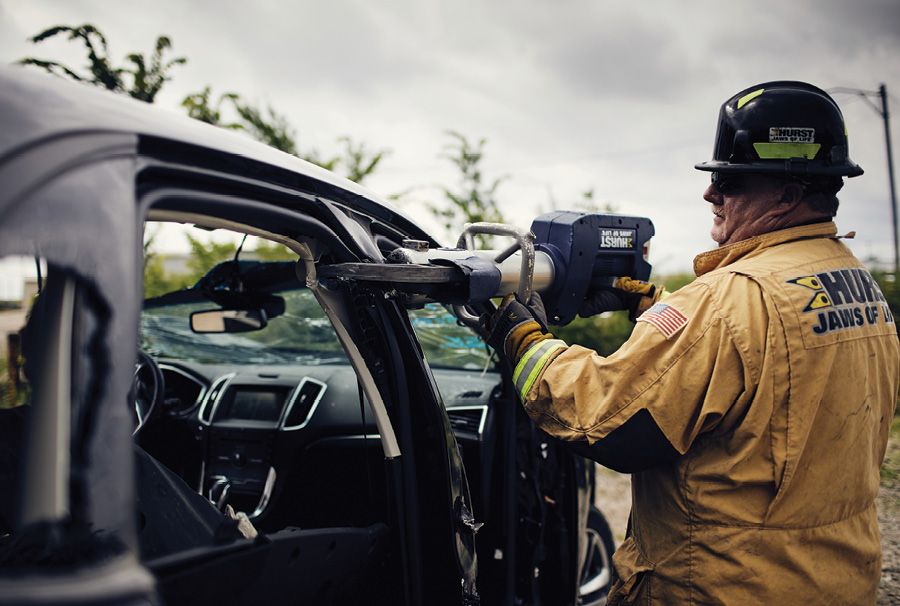 Johnston says that HURST takes a three-pronged approach to its hydraulic rescue tools: knowledge, training, and tool design. “In the past, a cutter could wrap around a B post and cut it,” he says, “but because of the use of high-strength steel, the cutter now must immediately begin cutting, so we made design changes to our tools.” Johnston says that HURST gave its eDRAULIC® cutters, spreaders, and combi tools longer reach, lighter weight, and wider openings.”

“With our cutters, we improved the blade designs and blade openings so they are wider to allow the blades to get around the larger B posts on these autos,” he says. “We did that with our S 377E2 cutter and S 312E2 models, increasing their cutter openings to 8.11 inches and 6.3 inches, respectively, adding more than ½ inch to their openings. We also designed smaller, sharper tips on the end of the blades to penetrate better and start cutting right away, which created more cutting force in the relevant work area at the tip of the blades.”

At FDIC International 2018, HURST launched its new S 799E2 cutter with a 9.5-inch blade opening, Johnston adds, “and our S 788E2 model’s blade depth and power were increased, letting it cut through steel 15 seconds faster than before,” he says. The 788’s blade depth is six inches. HURST also now has detachable tips on its spreaders and combi tools with four rows of shark teeth endings to improve the grip of the tools on high-strength steel.

Tony Barboza, vice president and general manager of Holmatro Inc., says that in the past several months, Holmatro has rounded out the EVO 3 series of battery-operated hydraulic tools, adding a system of removable tips to its newest combi tool, the model CT 5160, and introducing four sizes of inclined cutters. “With our CT 5160 combi tool, we went to a system where we have removable tips on the tool,” Barboza says. “Often, when a firefighter is using a combi tool, the tips reach past the cut and get further material in there, and the removable tips allow a full cut. The tips are ergonomically designed for use when wearing fire gear and also have reflective dots on them, so if the tips are dropped at night on a scene, the firefighter will be able to see them.”

Barboza likens the inclined cutter concept “to like the difference between straight pliers and CHANNELLOCK® pliers. The inclined cutter gives the user a 30-degree incline and allows the firefighter to make a straight cut while the tool is pointing away from the car. On overhead cuts, the incline keeps the operation handle closer to the user’s torso so the tool can be controlled better.”

Holmatro completed the rollout of its 5000 series, its fifth generation of tools, late last year when it also rolled out its battery-operated telescopic rams, the GTR 5340 and GTR 5350 EVO 3 units. Both versions are also available in CORE Technology versions, with the addition, in CORE Technology only, of the GTR 5370 large telescopic ram. “All of these telescopic rams have a laser pointer on the active ram head to allow the user to hit the mark the first time,” Barboza points out. “This gives a little more speed to the rescuers and benefits their patients.” Barboza adds that all of Holmatro’s hydraulic rescue tools have patented LED lights incorporated into their handles. 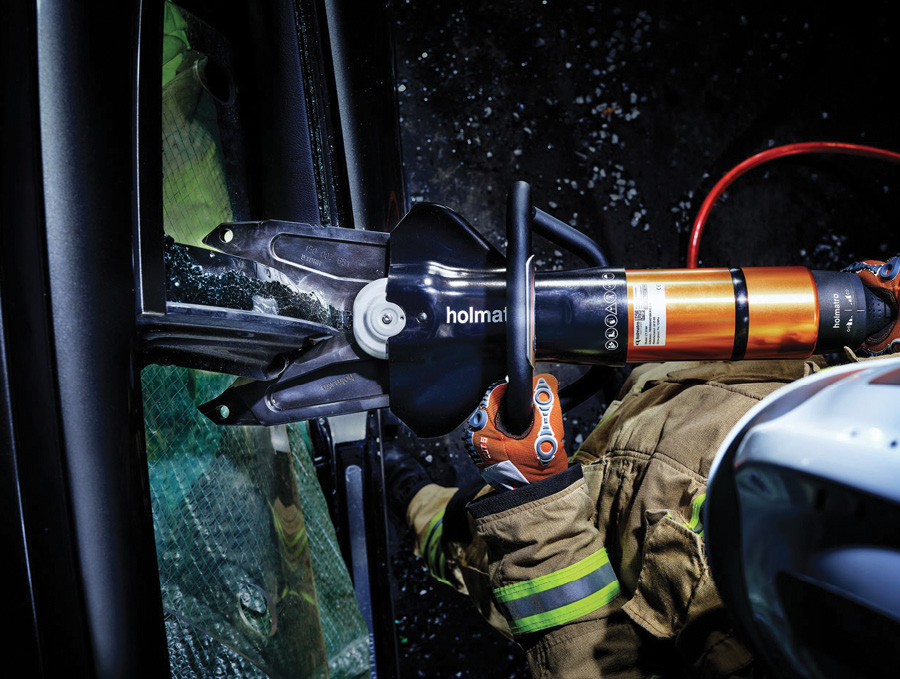 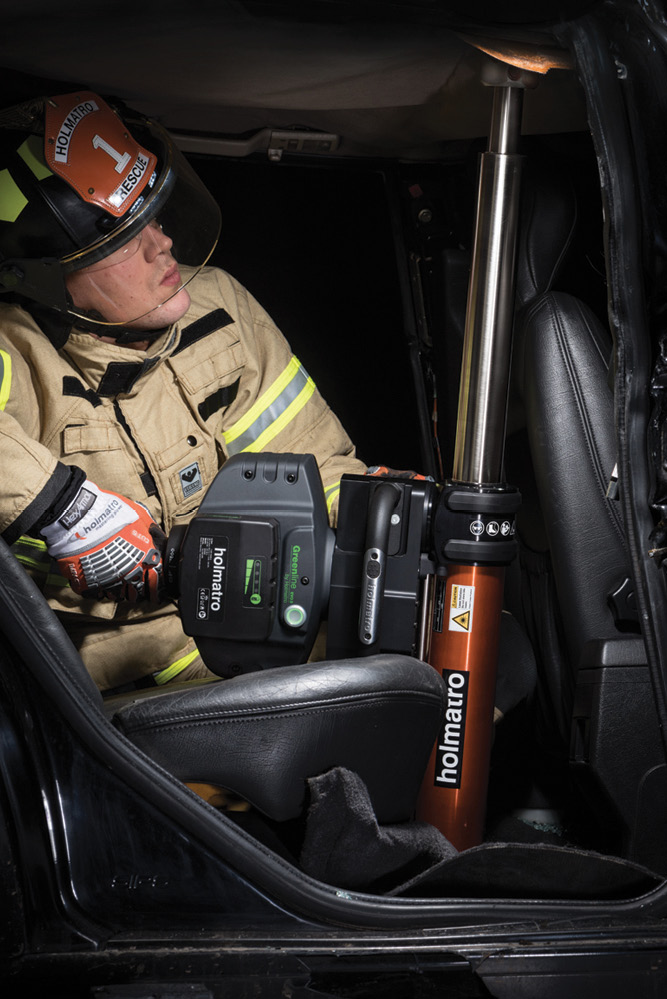 3 The Holmatro CT 5160 combi tool operates with its removable tips off. (Photos 3 and 4 courtesy of Holmatro Inc.) 4 The Telescopic Ram GTR 5350 LP made by Holmatro has a laser pointer at the active tip to allow precise positioning on the first try.

Philip Gerace, vice president of marketing for Task Force Tips, which owns AMKUS Rescue Systems, says AMKUS has introduced its new ION 2.0 line of battery-operated hydraulic rescue tools. “The new line uses the DeWALT® flexible platform that runs a 60-volt rescue tool,” Gerace points out. “It also can auto-power down to a 20-volt tool, like that used by a reciprocating saw.”

The ION 2.0 line includes a cutter, spreader, combi tool, and rams, and all will share the same DeWALT FLEXVOLT® power source. “The battery is available almost anywhere for under $100, which is a very affordable price,” Gerace observes. “We’re not aware of any other hydraulic rescue tools in service that use this flexible platform. If you run the battery all the way down, it continues to have reserve power, so you have enough power to get out of a cut if you are not in position to switch out the battery. You simply turn the tool off, and then back on, and you’ll have enough reserve batter power to move the tool to a position where you can change the battery.”

Calling the DeWALT FLEXVOLT battery an “intelligent system,” Gerace says the life of the battery depends on the load being put on it and the length of time it’s used. He says that DeWALT has 6-amp and 9-amp versions of the battery and is planning to introduce a 12-amp version soon. AMKUS uses the 6-amp battery as standard in its tools.

“These are rugged tools, with all-metal tool body construction and a metal cover over the hydraulic tool reservoir,” Gerace says. “We have rotating handles on both our ION 2.0 and hosed hydraulic tools because when on a scene, it’s not always easy to access a particular area. The rotating handles allow a firefighter to use the tool in an ergonomic way and have the best grip in an optimum position. The handles rotate on the fly and lock into place. And, our cutters are five to 12 inches shorter than our competitors’, so they can get into pretty tight spots, and it also means the user can be cutting at the strongest part of the blade where you have the maximum power and torque.” 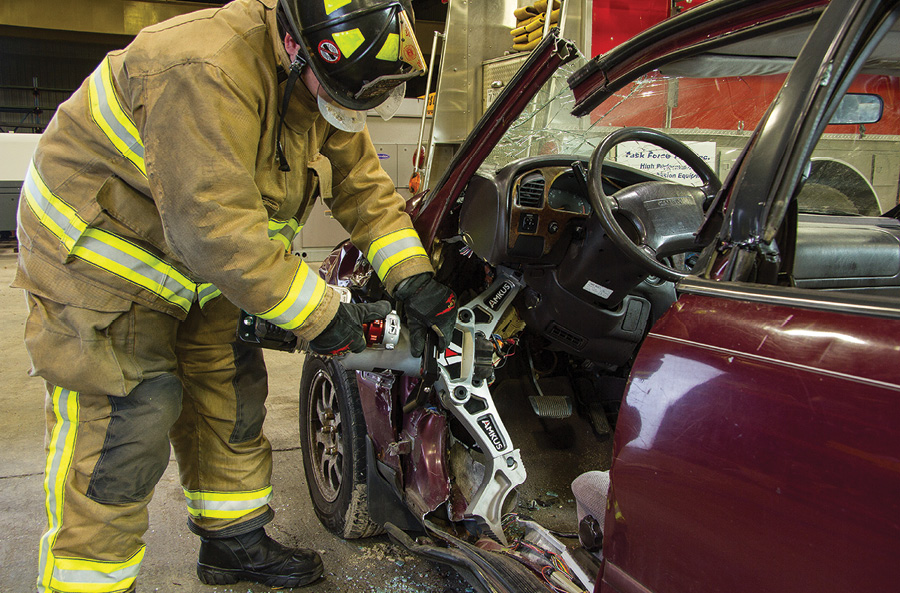 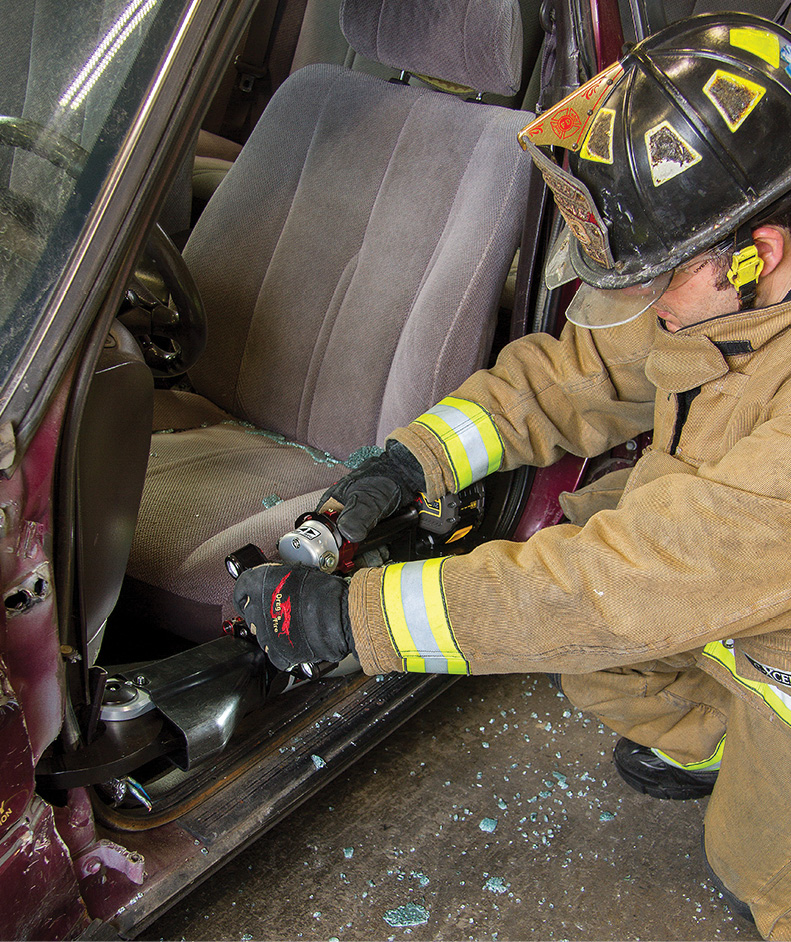 Mike Beharry, president of Midwest Rescue Products Inc., says his company is the North American distributor for the Ogura Hydraulic Rescue System. “The power head on the system has a pump, reservoir, and motor,” Beharry says. “Ogura uses a Makita motor system for its tools, spreader, cutter, combi tool, mini ram, pedal cutter, and door opener. This is a modular system that comes standard with a 5-amp Makita battery but also works well with a 6-amp battery.”

Beharry points out that because of the compactness of the unit and its limited hydraulic fluid, a user has to return the power tool to its rest position after use before switching out a head, “but the change takes only a matter of seconds.” The HRS-951 and HRS-962 series are Ogura’s latest developments that are double-acting, supplying power in both actuating and closing, instead of its previous single-acting system that only supplied power in an actuated direction.