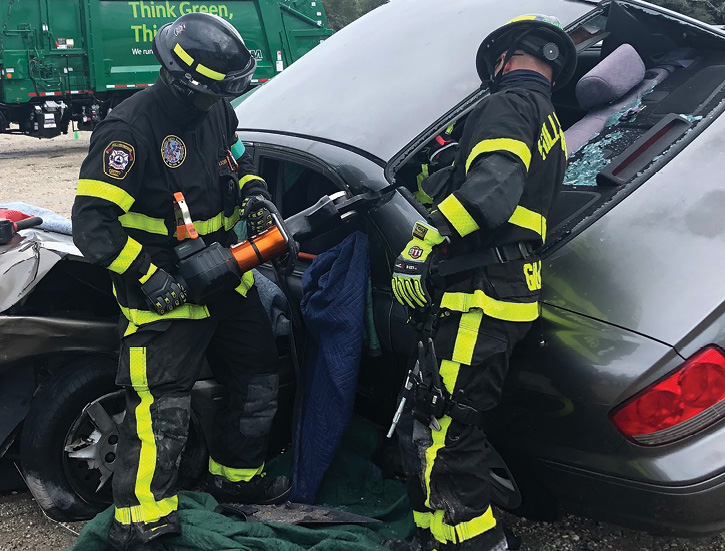 Hillsborough County (FL) Fire Rescue, after performing its due diligence in researching the various models of hydraulic rescue tools being turned out by manufacturers, then doing a week-long evaluation of the tools from four different manufacturers, followed by two weeks of evaluation of those tools by Hillsborough County firefighters and officers, developed specs and a request for proposal and awarded a $1.2 million contract to Holmatro.

Robert Collins, Hillsborough County Fire Rescue’s division chief of special operations, says the driving factor for the purchase of the hydraulic rescue tools was the age of the department’s then-current equipment. “We were using hydraulic rescue tools that were 14 years old,” Collins observes. “With the new metals being used in new cars, those hydraulic tools were just not getting the job done on any vehicle created in the last five years. The equipment was sound, but we needed to upgrade.”

2 A Hillsborough county firefighter sets up a Holmatro ram during the department’s hydraulic rescue equipment testing.

Collins says that the department’s chief officers felt it was very important to get firefighters involved in testing any equipment proposed for purchase. “We contacted four major manufacturers of extrication equipment and set up a week for them to come out here and demonstrate their tools for us,” he notes. “After a week of demonstrations, we had them leave their tools with us, and we had our heavy rescue crews, truck companies, and engine extrication teams test the tools for two weeks. All the firefighters who tested the tools filled out a survey of what they liked and didn’t like about each of the tools, and Holmatro came out on top. Then we put it out for bid, and Holmatro met the specs and the price point and won the contract.”

Nate Schwessinger, owner of Purchase Point Equipment Supply, who sold the hydraulic rescue tools to Hillsborough County, says that his company turned the order for 51 hydraulic rescue tool systems in to Holmatro in early November 2019, and Holmatro delivered the systems to Hillsborough County by January 1, 2020. “Once the tools were delivered, we spent two weeks training the trainers, the truck companies, and the heavy rescue firefighters, and then they and the Hillsborough County training division trained the rest of the crews with us in support,” Schwessinger says.

4 A Hillsborough County firefighter uses a hosed Holmatro cutter on a B post.

5 The Holmatro tools get a workout from a crew of Hillsborough County firefighters.

Frank Bondra, southwest regional manager for Holmatro, calls the Hillsborough County order “one of the biggest orders I’ve ever seen at Holmatro. For an order of that magnitude, we had a very good turnaround time. All our equipment is manufactured to order, and we were able to fulfill the order in eight weeks, even though it was especially busy at the end of the year when a lot of fire departments are trying to spend unused money in their budgets.”

Bondra praised Hillsborough County officers and firefighters for holding “head-to-head demonstrations of various equipment, with the department controlling the testing and the timing of the tests. They really put all the equipment through its paces and gave their firefighters an opportunity to test the equipment for a couple of weeks after the demonstrations were finished.” He notes that Hillsborough County’s firefighters determined that Holmatro’s equipment “performed the best of all the tools tested. They said they liked Holmatro’s technology and being able to do things quicker with our tools and also the cost of ownership and our lifetime warranty.”

Collins notes that the Holmatro hydraulic rescue tools have been in service for months. “I have not heard any complaints,” he says. “All of the feedback from firefighters and officers has been positive. Chief Dennis Jones authorized this purchase and wanted to be sure that the end users were the ones to select the equipment because they are the ones using it in the field.”

ALAN M. PETRILLOis a Tucson, Arizona-based journalist, the author of three novels and five nonfiction books, and a member of the Fire Apparatus & Emergency Equipment Editorial Advisory Board. He served 22 years with the Verdoy (NY) Fire Department, including in the position of chief.