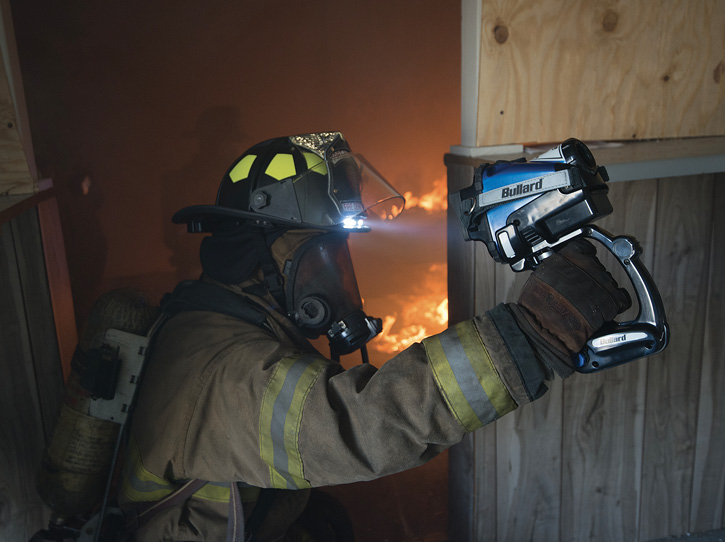 While thermal imaging is finding its way into self-contained breathing apparatus equipment to provide firefighters with hands-free imaging, handheld units continue to be the most prevalent type of thermal imaging camera (TIC) being used by fire departments across the country and continue to grow in numbers being issued to fire crews.

Jason Messerschmidt, national sales manager for the First Responder Group at FLIR Systems, notes that when TICs first hit the market for fire departments in the early 2000s, “They cost $20,000 or more and were as big as a brick. FLIR has helped drive the technology so that instead of one thermal imaging camera per fire station, it’s one per apparatus and, in some areas, mass adoption of one per firefighter.” Messerschmidt says that the FLIR K65 TIC is compliant with NFPA 1801, Standard on Thermal Imagers for the Fire Service, and has “the ability to record thermal video and take thermal stills, digital zoom, onboard imaging mode change with different color palleting and ranges, and provides high-quality images.”

2 The FLIR K65 TIC can record thermal video, can take thermal stills, and has onboard imaging mode change capabilities.

3 An image on the screen of FLIR’s K1 situational awareness camera.

Last year, FLIR Systems came out with the K1 situational awareness camera, Messerschmidt says, using MSX® technology, which is a video overlay on top of the thermal image, a technology that the unit shares with FLIR’s K2 compact TIC. FLIR Systems also makes the FLIR K55 high-performance TIC with a 320×240 pixel infrared sensor and FSX™ Flexible Scene Enhancement and the FLIR K45 high performance TIC with a 240×180 pixel sensor.

Jasmine Spencer, fire service marketing manager for thermal imaging cameras at MSA Safety, says MSA makes three models of TICs for the fire service, all of which are NFPA 1801-compliant: the EVOLUTION® 6000 Basic, Plus, and Extreme. “The EVOLUTION 6000 Basic is built for economy and durability,” Spencer says, “with a 320×240 infrared sensor, standard flashlight, and laser pointer. The EVOLUTION 6000 Plus adds six color palettes, has a zoom capability, and a compass.”

5 The EVOLUTION 6000 Plus made by MSA Safety has six color palettes, a compass, and zoom capability.

6 A firefighter uses an MSA EVOLUTION 6000 Extreme TIC inside a fire building.

MSA’s EVOLUTION 6000 Extreme TIC has all the features of the Plus model and adds video capture that can handle up to 1,000 digital images or four hours of video. “The three models are fireground-tough products designed for easy handoff on the fireground, have a patented dual handle with pistol grip,” Spencer points out, “while the six color palettes offer flexibility to view thermal information intuitively, the 2×/4× zoom allows for closer looks at areas of interest, and the video/picture capture saves images for future review and training.”

John Graves, global product manager of search and rescue for 3M™ Scott Fire and Safety, says 3M Scott makes four models of handheld TICs: the new V320 Thermal Imager, designed as a tactical search and rescue unit; the X380N TIC, which is compliant with NFPA 1801; the X380 five-button TIC; and the X380 three-button TIC. “Our new V320 Thermal Imager has a 320×240 high-resolution sensor, a rechargeable battery with up to eight hours of run time, a single on/off button for easy deployment, and a lightweight and durable design,” Graves says.

8 A firefighter uses a 3M Scott V320 TIC, which is designed as a tactical search and rescue unit.

The company’s X380N NFPA-compliant TIC has a 384×288 sensor with pixel-to-pixel mapping, hot and cold spot trackers, tactical color that grows in intensity from gray to yellow to orange to red, intelligent focus that allows the user to see an object in clear detail immediately, a direct spot temperature readout, a laser pointer, and a lightweight design that weighs in at 2½ pounds, Graves points out. He says that the three-button X380 TIC has a front control panel where the buttons control the hot and cold spot tracker, the on/off, and the 2×/4× digital zoom functions, while the five-button X380 model provides on-demand DVR for recording footage and image capture that takes a snapshot of the scene when the DVR is not running. The unit also has a freeze frame feature, he adds.

11 A firefighter checks his Bullard NXT TIC inside a fire building.

12 The screen image on a Bullard QXT TIC.