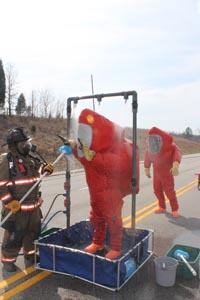 FT. KNOX, KY – Making more than 2,000 runs a year, the Ft. Knox (KY) Fire and Emergency Service department is responsible for more than 109,000 acres of military and civilian personnel. No stranger to hazmat situations, even after successful deployments dealing with train derailments, meth labs, chlorine incidents, and minor gas leaks, the Ft. Knox crew couldn’t have predicted the call it would receive on April 6.

Around 1:00 PM Shane Crutcher, assistant chief of the Ft. Knox Fire Department, received an urgent request for assistance from his neighbor to the west in Breckinridge County. The incident commander of the Hardinsburg City Fire Department reported an overturned tanker carrying 10,000 gallons of gasoline after a head on collision with a passenger vehicle.

“The commander on scene informed me that help was over two and a half hours away,” says Crutcher. “My team was about 40 minutes away, so we assembled a group of six first responders in our truck.” Six counties surrounding Ft. Knox share a mutual aid agreement in which participants lend equipment and personnel services at no charge.

There was already one fatality on scene from the crash, and the operations-level Hardinsburg Fire Department had to perform an emergency extrication rescue, ditch their vehicle, and quickly pull the remaining two survivors to safety upwind and uphill.

Crutcher arrived just before the rest of his team assembled at the crash site. Initial reconnaissance told Crutcher that an unknown amount of gas was pouring into a nearby waterway which led to the Ohio River just 1.5 miles away. There were limited staging points, heavy winds, and the truck was energized as it laid on its batteries.

Ultimately the team decided they could not safely deenergize the battery. Two out of the four compartments on the rig were ruptured: one large gash in the rear tank, and one leaking out of the top hatch of the roof. In addition, there were multiple ignition sources close by and the Coast Guard had to be brought in to dam strategic points in the waterway to prevent the spread of gasoline to the Ohio River.

After a careful situational analysis, the team prepared to enter the scene in two man teams using compliant NFPA 1991 Level A hazmat suits. Saint-Gobain’s ONESuit® Flash, introduced to the Ft. Knox Fire Department by the Army 1st Responder Program (Department of Defense), was used to protect firefighters from fumes and the possibility of a flash fire. Level A suits offer the highest level of protection against vapors, gases, mists, and particles. They fully encapsulate the user and a self-contained breathing apparatus (SCBA) inside the suit. Crew members must also wear steel toe boots and special chemical protective gloves, which happen to be the ONEGlove® Hazmat gloves in this case also from Saint-Gobain.

After suiting up, responders laid down a foam blanket to smother the fumes and help keep the various ignition sources from setting off the uncontrolled fuel source. Eventually the Ft. Knox Fire Department closed the locking device on the hatch by using vice grips and sealed the tank’s gash with Pig® Putty, a multipurpose epoxy which quickly hardens when applied in this application.

Throughout the ordeal, the team rotated pairs of first responders every 20 minutes to ensure safe working times within the breathing constraints of their SCBA equipment and heat stress avoidance.

“The ONESuit® Flash was comfortable and had great visibility,” says Byron Smith, a first responder from the Ft. Knox Fire Department. “It was secure on my body, easy to move around in, and was easy to don and doff.”

Mitigation efforts, including digging up contaminated earth and damming affected water, were handled by the gas company which owned the truck involved in the incident.

Ultimately, between 3,800 and 3,900 gallons of gasoline spilled. If not for the efforts of the Ft. Knox Fire Department, 2,000 more gallons could have contaminated the surrounding environment. Total time from initial entry to exfiltration was five hours, 30 minutes.