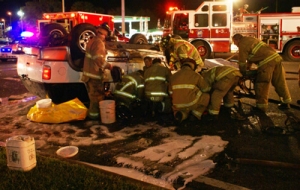 OCALA, FL – A two vehicle collision at the intersection of South Pine Avenue and Southwest 17th Street resulted in a one vehicle coming to rest on its roof. On arrival firefighters faced multiple challenges. Firefighters used hydraulic extrication tools to gain access and safely remove one injured occupant from the rolled over vehicle. The injured driver was treated by paramedics and taken to a local hospital. Three juveniles inside the rolled over vehicle were not injured.

Firefighters placed a protective layer of foam onto gasoline that had spilled from one vehicle onto the roadway. They also used absorbent to dike the gasoline to prevent it from running into the storm water drainage system. The driver of the second vehicle told fire officials she was not injured and declined transport to the hospital.

Ocala Fire Rescue responded to the collision at 8:14 p.m. and arrived within three minutes. Firefighters remained on scene over one hour.

In the inserted photo, firefighters remove the injured driver.