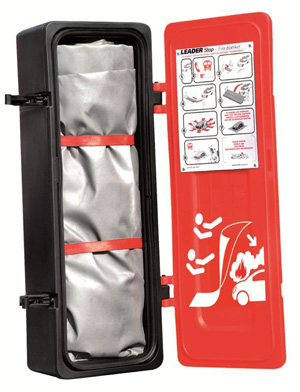 On the March 8, 2012, a massive fire started from one vehicle and swept the underground car park of the famous Place Vendôme in Paris. More than 100 firefighters mobilized for more than six hours, 30 vehicles were destroyed, and the fire damaged structures and cars because of the smoke and heat. To avoid such a disaster, LEADER has developed the LEADER Stop extra large fire blanket.

Fast and easy to deploy by two personnel on an incipient car fire, LEADER Stop: