Technical rescue, urban search and rescue (USAR), and hazmat trucks must carry specialized rescue equipment that often is not seen on typical municipal rescue trucks. At times, the type and size of such specialized equipment require apparatus manufacturers to craft custom spaces on their trucks to accommodate them.

Bill Proft, rescue program director for Pierce Manufacturing Inc., says Pierce has built a number of USAR trucks for fire departments similar to one it built for the Chula Vista (CA) Fire Department. “It’s on an Arrow XT four-door chassis and cab that has our TAK-4 T3 independent steer on the tandem rear axle,” Proft says. “The truck carries a 40-kilowatt generator, a light tower, full breathing air capability with a compressor housed in an over-the-wheel compartment, an RGC industrial hydraulic power supply, and an air tool compressor.”

Proft notes that for the Sacramento (CA) Fire Department, Pierce built a USAR truck on a Velocity chassis and four-door extended cab with tandem rear axles that has plywood and timber storage at the rear of the vehicle and a compartment on the side with a combination door consisting of a drop-down door on the bottom and a roll-up door on top to provide wide access to oversized equipment.

John Borovies, sales application specialist for KME, says KME recently built a USAR truck for the New Jersey State Police on an International 6 × 6 chassis with a combination body. “The front part of the body had a door on the officer’s side that had a command desk in the space inside,” Borovies says. “The back end had transverse storage space and a walk-in area at the rear for the technical fiber optic equipment they use in confined space and collapse situations. These are their cameras and microphones on extendable cables that are stored in Pelican cases that they didn’t want in side body or roof compartments, so we built the space in the rear accessed through a lockable roll-up door with no seating and only shelving inside. We also built a slide-out tray with a ramp in a side compartment to carry a portable gas-powered hydraulic unit that they use for breaching concrete.”

2 The Pierce-built USAR rig for Chula Vista carries a 40-kW generator, a light tower, an air tool compressor, and full breathing air capability with a compressor house in an over-the-wheel compartment. 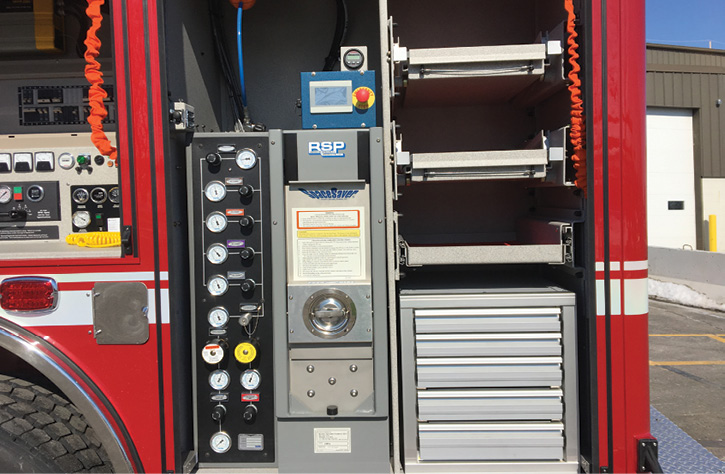 3 The Chula Vista USAR truck has an RGC industrial hydraulic power supply in the L5 compartment. 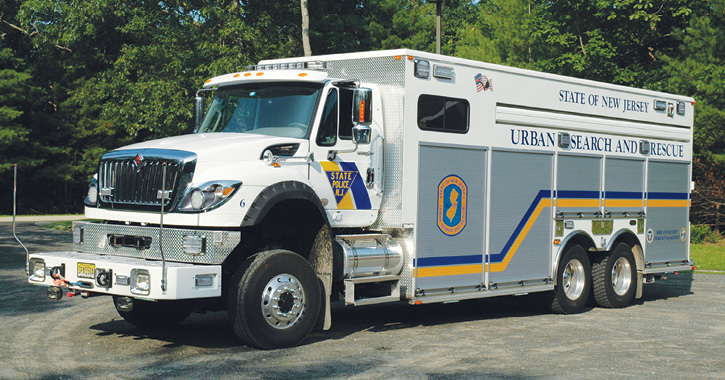 4 KME recently built a USAR truck for the New Jersey State Police that has a walk-in area at the rear of the vehicle to store fiber optic equipment used in confined space and collapse situations. (Photos 4 and 5 courtesy of KME.) 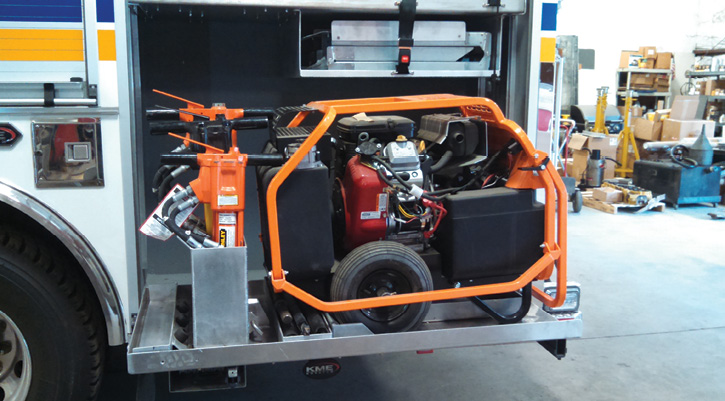 5 The New Jersey USAR truck has a slide-out tray and ramp at the left rear of the rig to carry a portable, gas-powered hydraulic unit used for breaching concrete in collapse situations.

Kevin Arnold, rescue products manager for Ferrara Fire Apparatus, says Ferrara recently delivered a USAR truck to the San Diego County (CA) “loaded up with cribbing, air bags, jacks, and struts. In a transverse compartment over the rear wheel wells, we put their 4 × 4 and 2 × 4 cribbing that they use for trench rescue with a top shelf to carry 4 × 8 sheets of plywood.” Arnold continues, “The right rear compartment has a solution for jacks that are mounted vertically on roll-out tool boards.”

Arnold adds that Ferrara incorporated eight Crosby tie-offs on the San Diego USAR truck, three on each side and two at the rear of the vehicle. “These are unique rope tie-offs, which are essentially a loop on a pivot that the rescuers can hook a rope or tripods to,” he says.

Joe Messmer, president of Summit Fire Apparatus, says Summit built a USAR truck for the Cincinnati (OH) USAR Team that pulls a trailer-mounted fork lift. “They may get to a scene and have a shoring incident, so they’ll remove the forklift and come to the side of the truck to take out totes filled with lumber and tools and carry them to the site,” Messmer points out. “The totes are five or six feet square and about four feet tall and have a hinged side on them for easy access.”

Summit also built a technical rescue trailer for Northern Kentucky, Messmer says. “It’s a fifth-wheel trailer that’s tractor-pulled,” he notes, “and has eight compartments down each side to house their large equipment. The average width of those compartments is 60 inches.”

Mike Mildner, rescue sales specialist for E-ONE, says E-ONE recently built a stainless steel heavy technical rescue truck on tandem rear axles for the Aurora (CO) Fire Department. “It’s a walk-around vehicle that handles confined space, collapse, and mountain rescue due to their unique service area, which has snow in the winter and hikers lost in summer,” Mildner says. “There’s a transverse compartment over the rear wheels that holds plywood panels and a cut table; the roof coffins have separate lids with nondivided boxes to hold a full ladder complement and 16 2 × 4 timbers and 12 4 × 4 timbers, all 14 feet long.”

For the Buffalo (NY) Fire Department, E-ONE built a technical rescue truck that also handles USAR, Mildner notes. “There’s a walk-in area at the front of the body with access from the crew cab,” he says, “and a center stairway in the back with an air-actuated system to lift up the back of the staircase because underneath the B1 compartment goes into the wheel well compartment to form a T. An oxyacetylene torch is in the back compartment and an air tool compressor is in the T.” 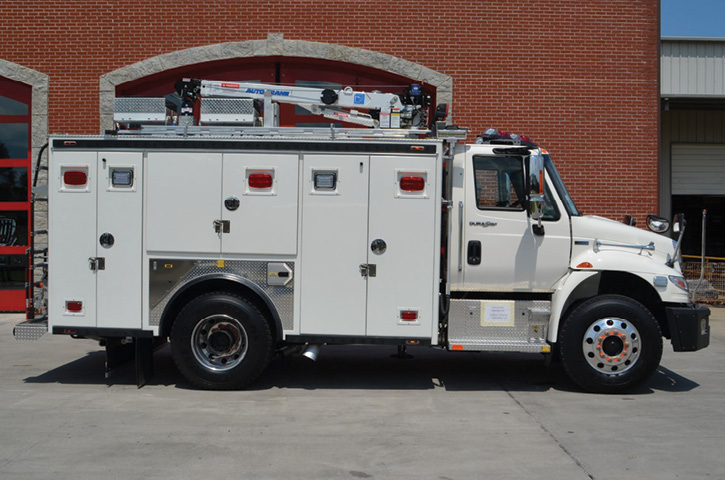 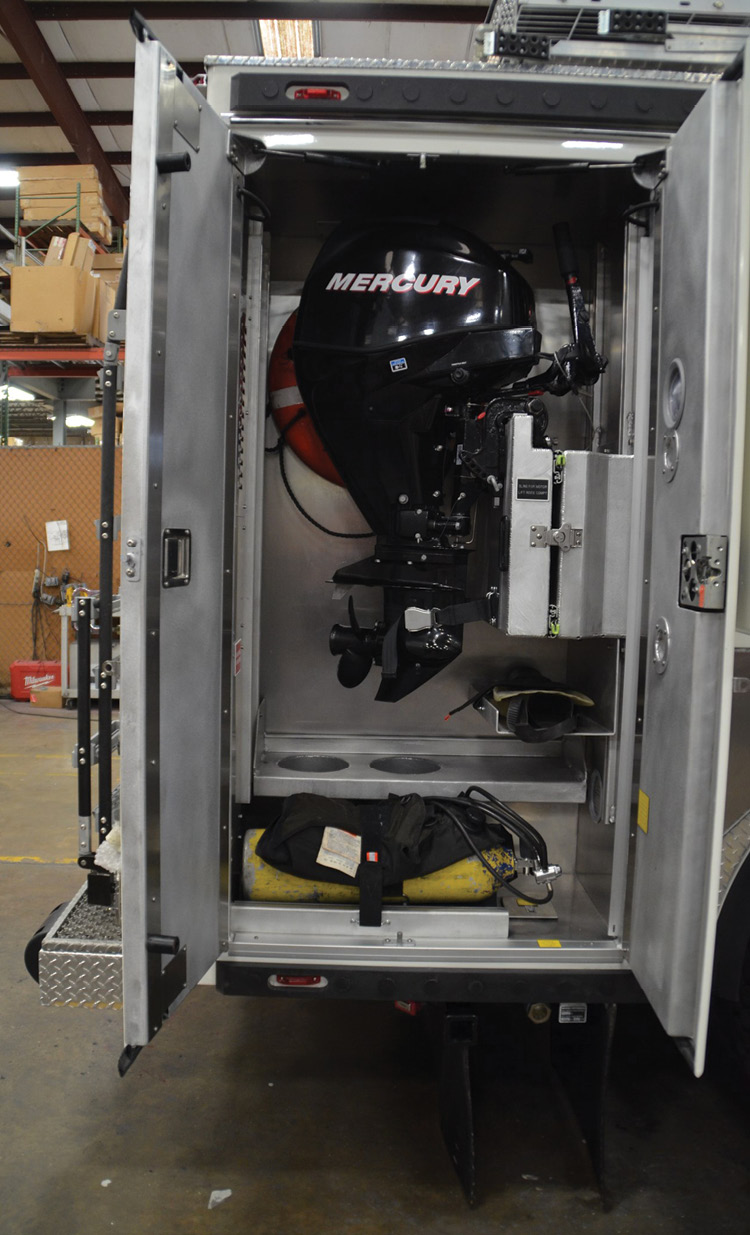 7 The Mercury outboard motor for the rigid-hull inflatable boat on the NYPD ESV is located in the R3 compartment. 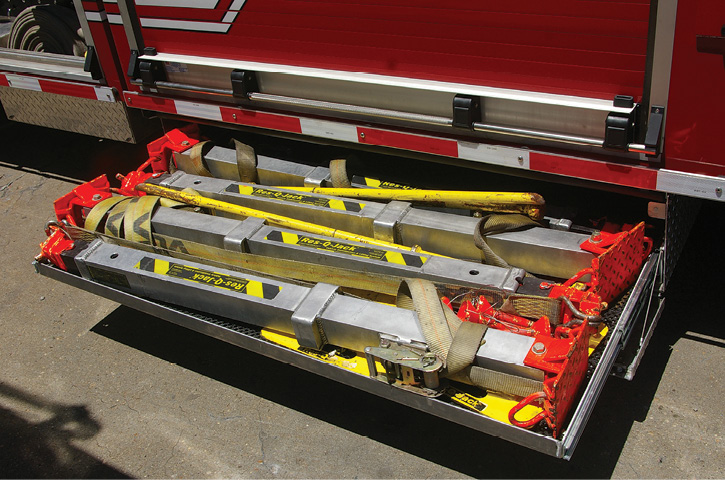 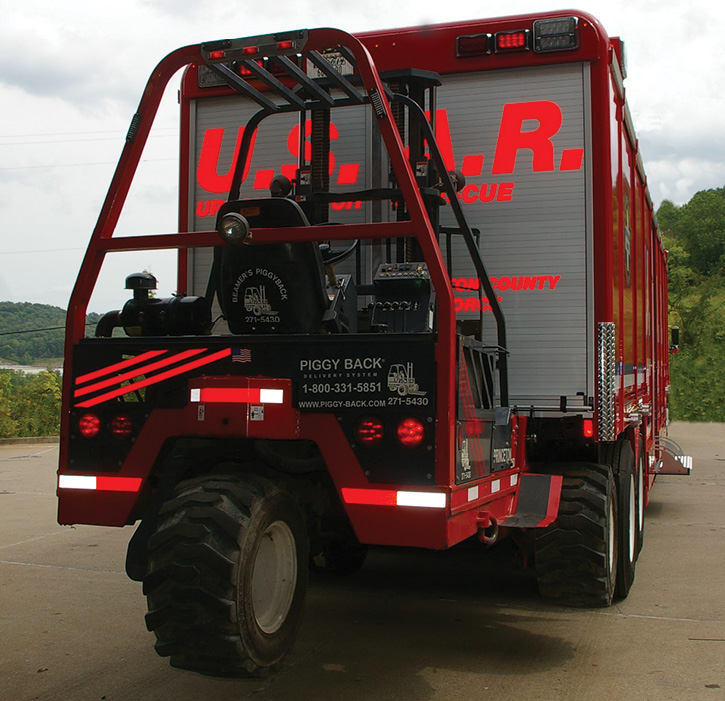 Dwayne Woodard, eastern regional salesman for SVI Trucks, says SVI has built transverse compartments for technical rescue trucks where the slide-out drawer is able to slide out 70 percent of its length on each side of the truck. “It’s very good for large shoring kits, but we’ve also put dive packs and fans on them,” Woodard says. For cribbing storage on USAR trucks, Woodard says SVI has been creating coffin compartments at the top of rear walkway steps to hold 2 × 4 and 4 × 4 timbers as well as raker kits.

“Mobile winch anchor points are now very popular,” he observes. “SVI makes a custom front bumper with one front and two side anchor points that will handle a 9,000-pound portable winch and also can be used as rope rescue anchor points. Some departments carry SCUBA diving equipment for water rescue, and a lot of departments use a large slide-out tool board to mount scuba packs where the person can walk up to it, put it on, and walk away. For the St. Louis (MO) Fire Department, we built their Rescue 1 and 2 trucks with walk-in spaces at the front of the boxes where divers can get dressed and rehab.”

Tom McCracken, A-shift captain of Squad 8, a technical rescue truck at the Phoenix (AZ) Fire Department, is a rescue specialist, boat operator, and heavy equipment rigging specialist on Arizona Task Force 1 as well as a structural collapse instructor. The Phoenix Fire Department runs the task force, and all team members are Phoenix firefighters. “Everyone on our tactical rescue trucks (TRTs) is hazmat- and technical-rescue-qualified,” McCracken says. “All TRT trucks carry a Paratech trench rescue kit; a Paratech raker kit for structural collapse; search cameras; a weather station; and the same complement of extrication equipment that a ladder company would carry but with different spreaders, larger rams, and heavy lifting bags along with a normal complement of air bags.” 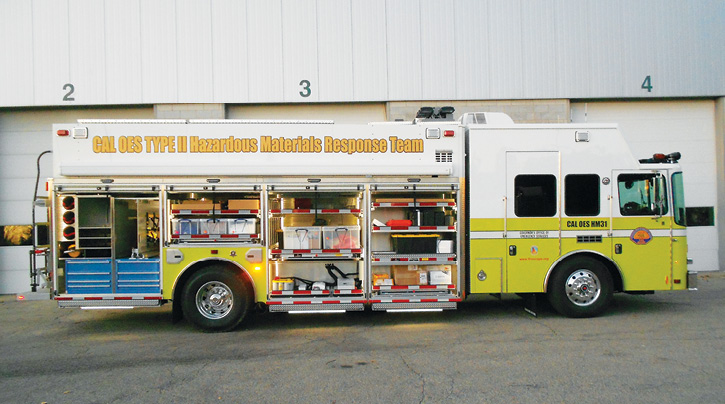 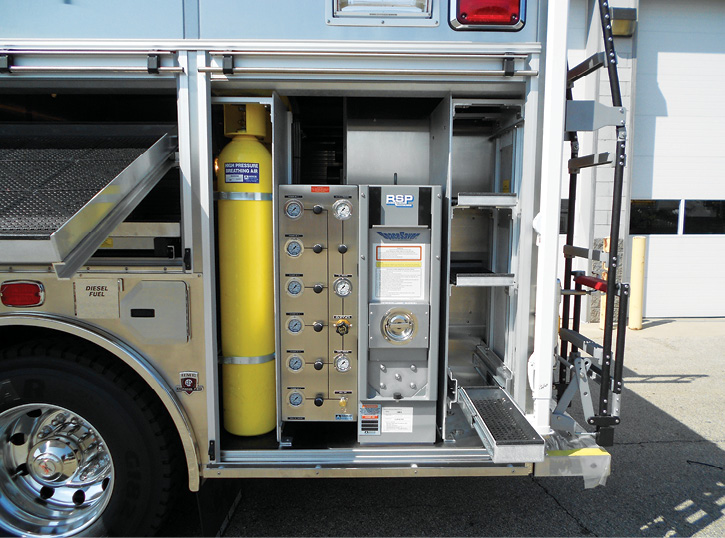 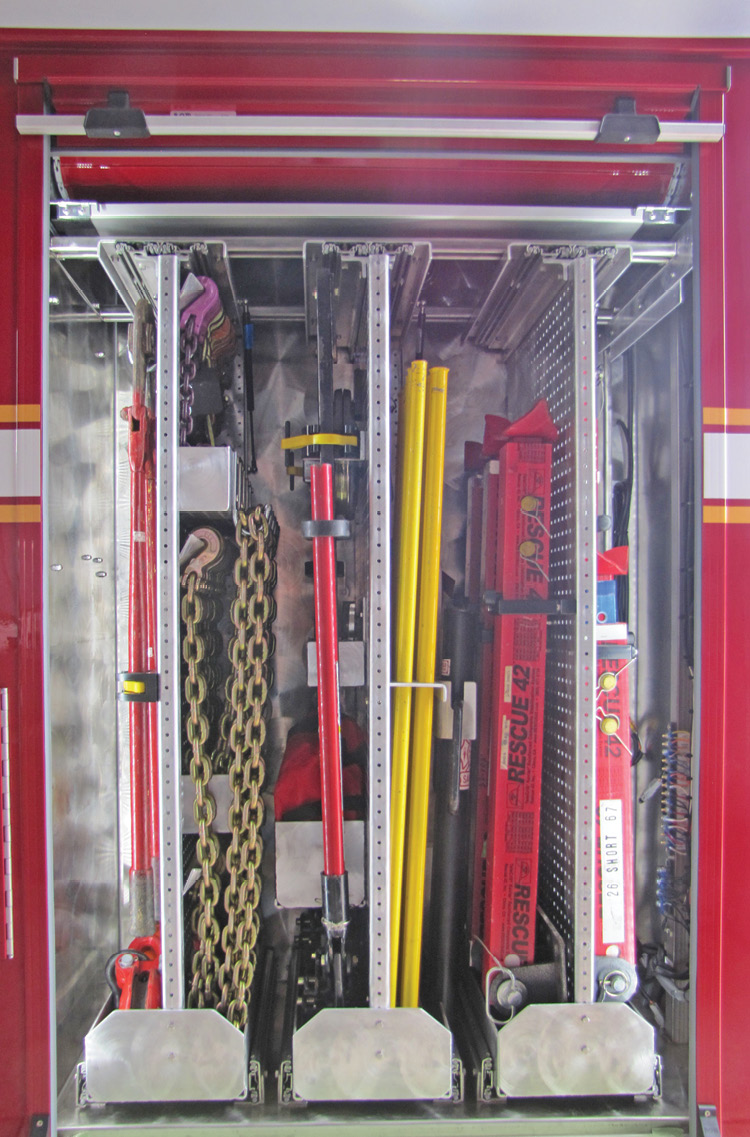 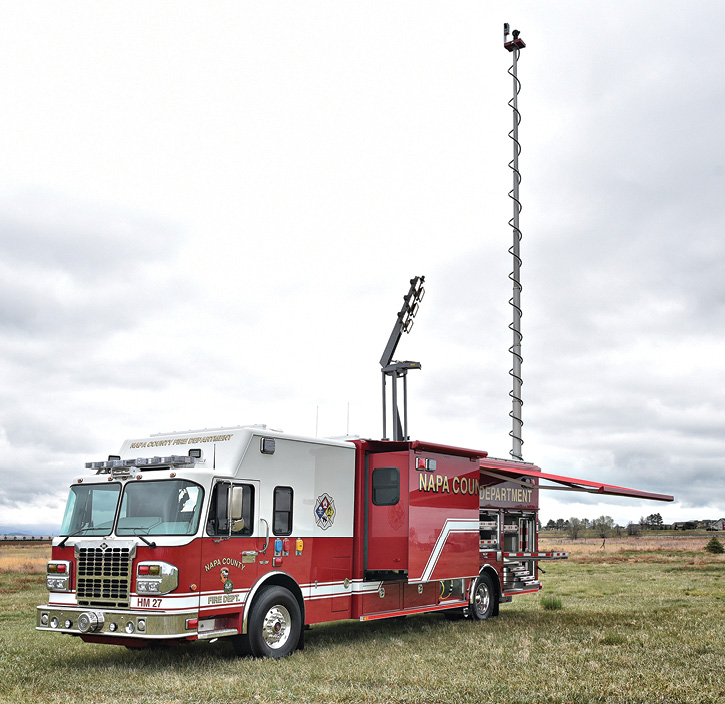 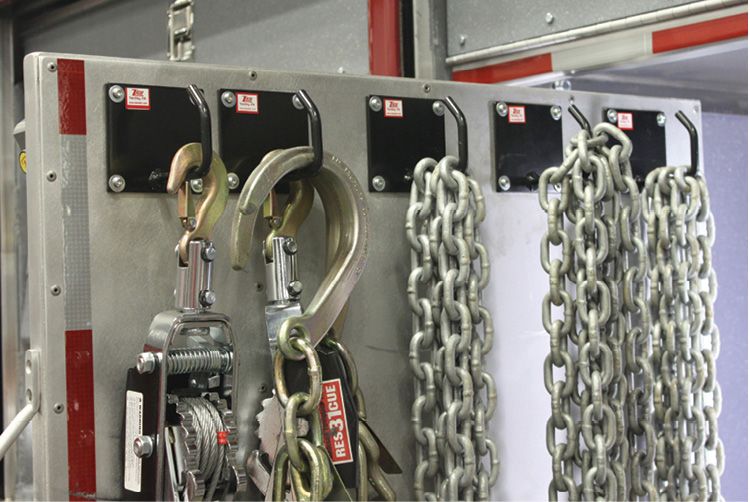 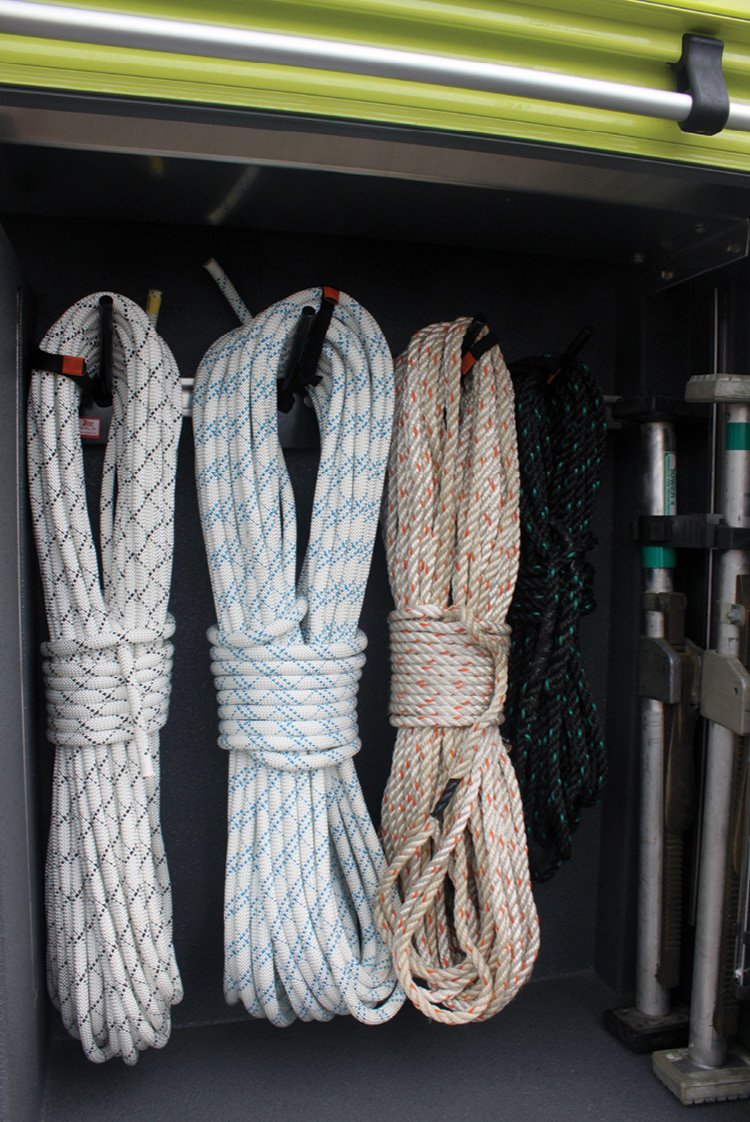 Jeff Schripsema, deputy chief of Special Operations for the Phoenix Fire Department, says 200 Phoenix firefighters are trained in different specialties in the task force and are able to be deployed within four hours of being called. “We have four levels of response,” he says. “Type 1 for structural collapse is an 80-member team designed for heavy extrication building collapse, while Type 2 response is the same as a Type 1 but with more chemical, biological, radiological, nuclear, and explosive deployment. Type 3 is a 30-member response for a hasty search of a collapse or impacted area and lightweight debris search and rescue, while Type 4 is a mission ready package (MRP) in a modular concept. We have a water MRP of 20 to 24 persons during hurricane season that brings boats for water rescue and also a canine MRP with live search dogs and human remains dogs plus a communications MRP.”

Mike Adams, vice president of Ziamatic Corp., says that Ziamatic will be coming out with a manual ladder gantry for technical rescue trucks that stores ladders horizontally over the truck. “One person will be able to bring the ladder down from the rear of the truck and also replace it from the rear,” Adams says.

Dennis Summers, co-owner of Fire and Marine Inc., says his company makes a tote for an air bottle, hoses, gauges, and an air bag that often are used in confined space and collapse situations. “We also have outfitted a command center in the back of a technical rescue truck for a fire department in Pennsylvania,” he says, “because they wanted a space where they could carry a drone.”

Thomas Trzepacz, fire industry salesman for Performance Advantage Co. (PAC), says the big issue on technical rescue trucks is organizing the equipment and having a place for everything. “Some large trucks and trailers use rails of our strut and PAC Trac material,” he says, “and some shoring and struts are being mounted in Jumbolok and Super Adjustamount units. We also have a new product, a tie-down mount with shackles that fits into our PAC strut, Mini Trac, or Dual Trac. The shackles move in the track to be adjustable depending on what you’re mounting.”

Phil McLean of Sensible Products Inc., says Sensible Products outfitted 16 USAR trailers for the state of Georgia. “There were a lot of specialized mounts for rope bags and hazmat suits in storage pouches where we put in a plastic floorboard and movable plastic dividers in a cabinet to segregate the bags,” McLean says. “These are in 60- × 30- × 30-inch wheel well cabinets with straps across the front to hold them secure.”