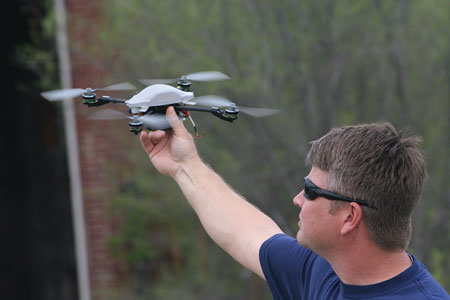 Unmanned aerial vehicles (UAVs), commonly known as drones, are finding their way into fire department equipment inventories, typically being used as reconnaissance and size-up assets at fire scenes, as well as to take advantage of thermal imagery to identify hot zones with a fire.

A number of fire departments around the country have either received or applied for a certificate of authorization (COA) from the Federal Aviation Administration (FAA) to operate UAVs.

Drones also are being popularized in the civilian world and are showing up at fire scenes, operated by civilians often flouting FAA regulations concerning areas of operation and maximum altitude and sometimes interfering with firefighting operations, causing headaches for incident commanders (ICs) and wildland fire bosses. The FAA has promised regulations soon that would set limits on drone use, well beyond those currently in place in the United States.

UAVs for the Fire Service

While civilians have a huge number of UAV models and brands to choose from for hobby use, fire departments generally look at UAVs in terms of performance, robustness, payload capability, and speed of deployment, among other attributes.

Peter Darley, executive vice president and chief operating officer of W.S. Darley & Co., says the company brought the Stinger, its first UAV, to market in 2011 but now partners with Physical Sciences Inc. on the InstantEye Mark 2 Gen3 system. “Last year, at a plant explosion, the Louisville (KY) Fire Department used a Darley InstantEye to do three-dimensional mapping of the plant for a fire investigator’s report, taking photos and live video of the scene,” Darley says. “We also are seeing the unit being used in search and rescue, in flooding situations where it can identify people trapped on roofs or in occupied vehicles, and in hazardous materials situations like train derailments.”

Mike Mocerino, robotics business development manager for W.S. Darley & Co., points out that there is a big difference between the drones used by hobbyists and what fire departments need. “There’s a huge difference because those developed for fire departments are professional systems that are ruggedized, use encrypted communications, and carry specialized payloads since they are built with the end users in mind,” Mocerino points out. “There’s also a sophistication to the flight controls you don’t find in hobbyist drones.”

Mocerino says the InstantEye Mark3 tips the scales at two pounds, including its video cameras and batteries. “Our system has three cameras on it, so you can go over a scene and have every vantage point covered,” he says. “You can add a 4x zoomable camera or a thermal imaging camera (TIC) if desired, which brings the unit up to its maximum of five cameras.”

He notes that W.S. Darley & Co. is adding other payload options to the InstantEye system. “We’re hoping to have digital video shortly instead of analog and are looking to the future where the system can be a node in a communications network for audio, video, and data from one point to another,” Mocerino says. “It will be almost like a mini portable satellite.”

Michael Shabun, senior marketing manager for DJI, says his company has been doing “quite a bit of work with the fire service,” starting with its Phantom platform and now the Inspire UAV. “Inspire can take bigger wind conditions, fly faster, and carries more of a payload,” Shabun says. “It also has the option of a TIC in a gimbal adapter that replaces the digital video camera.”

DJI’s Phantom weighs about three pounds, is 12 inches square, and can fly at up to 44 miles per hour (mph). Shabun notes that Inspire is twice Phantom’s size, has stronger and larger motors, flies at up to 65 mph, and has a gimbal that can rotate 360 degrees for more precise control of the camera. “Both drones have essentially the same brain and flight controllers,” he says, “and will return to home if they are low on battery power or go too far and lose a signal.”

Shabun says the Phantom 4 model has the ability to detect and avoid objects. “It can follow an object or a person and also has Tap To Fly, where instead of using a transmitter joystick, the operator can tap on the screen of an iPhone, iPad, or tablet, and the Phantom 4 will automatically fly to that area.”

Brendan Kramp, director of U.S. and Canadian business development for Insight Robotics Ltd., notes his company makes the Aerial Sensor 3 fixed-wing UAV that has a length of 6½ feet, a wingspan of 10 feet eight inches, and a payload of 5½ pounds. “It was originally designed for large land surveying but has been put to use in surveillance of wildland fires,” Kramp says. “It’s launched off of a catapult and can do either a belly landing or land from a parachute in its nose after its two-hour flight time.”

Jon McMillan, director of business development, unmanned systems for Lockheed Martin Corp., says his company has had a lot of requests from fire agencies about its small UAVs and what they can do for firefighters around fire scenes. “We have a team in Palmdale, California, working with the Department of the Interior on fixed-wing assets for fire scene mapping,” McMillan says. “We flew two of them last year on tests in wildland fires, and Interior is looking into how to integrate them into the busy airspace operating over the top of a wildland fire.”

Lockheed Martin also has demonstrated the ability of its K-MAX helicopter UAV to aid in firefighting operations. Lockheed Martin used an Indago quad rotor UAV to identify hot spots in the fire and provided that data to an operator on the ground who directed the unmanned K-MAX helicopter to autonomously extinguish the flames. The K-MAX lifted and dropped more than 24,000 pounds of water on the fire in one hour.

The Indago UAV has electro-optical and infrared gimbaled imagers that are able to provide high-quality data and enhanced situational awareness for fire managers to make real-time decisions, McMillan notes. He adds that Indago’s use goes beyond firefighting to search and rescue and hazmat situations.

Garret Bryl, a civilian UAS enthusiast working with the Joshua (TX) Fire Department, says the department has been beta testing DJI’s XT TIC on the Inspire platform. “We’ve taken it out on a few incidents and have been able to get a 360-degree thermal flow on a building before firefighters made entry,” Bryl says. “It takes about 30 seconds to get that thermal flow path.”

Bryl adds that operation of the TIC in the air is simple. “You point the TIC at the heat source, like you would on the ground, and you can see rooms in a structure and where the heat is flowing from the source to the exit,” he says. “The testing has been phenomenal.”

Joshua firefighters have used the Inspire to identify a flood victim within 45 seconds of getting the unit into the air, Bryl says. “In another instance, it flew a tag line during a swift water rescue, which allowed firefighters to deliver a full-size life vest to the victim in the pitch black of night.”

Bryl adds that the Joshua Fire Department is in the process of applying for its COA but notes that “there’s been word that the FAA is considering giving a blanket COA for emergency services agencies across the country.” Representatives of the FAA were not able to confirm that contention, although the FAA notes it is in the process of promulgating new rules that cover all types of UAV operation.

Michael Kull, chief of the Valley Township (PA) Fire Department, says his firefighters have found the InstantEye “lightweight, easy to use, and handy because you get two aircraft with the system.” Kull says his department is responsible for covering approximately 15 miles of Interstate 80 through rural Pennsylvania. “The only exit in our county is near our station, so we use the InstantEye to track traffic control patterns. On one incident, we checked traffic backlogs after a big accident. Our state police needed to do a reconstruction of the accident and got video of the scene from our InstantEye.”

Kull points out that when the department gets a nighttime report of fire or smoke in a rural area that isn’t pinpointed, he can put the drone in the air and turn on its TIC to determine the fire’s exact location. “If we didn’t have that ability, the fire would either go out on its own or cause more damage,” he observes. Kull says Valley Township has been using the InstantEye for about two years.

Chuck MacFarland, air operations chief for the San Diego (CA) Fire Department, says the missions for UAV use can be for structure fires, wildland fires, rescues, and special operations such as hazmat incidents. But, he cautions that fire departments also should consider better educating citizens about the hazards of using hobbyist drones near fire scenes. “There have been many incidents of unauthorized use of a hobbyist UAV near fires,” MacFarland says. “The fire service has to educate the public not to fly their aircraft close to any fire airspace.”