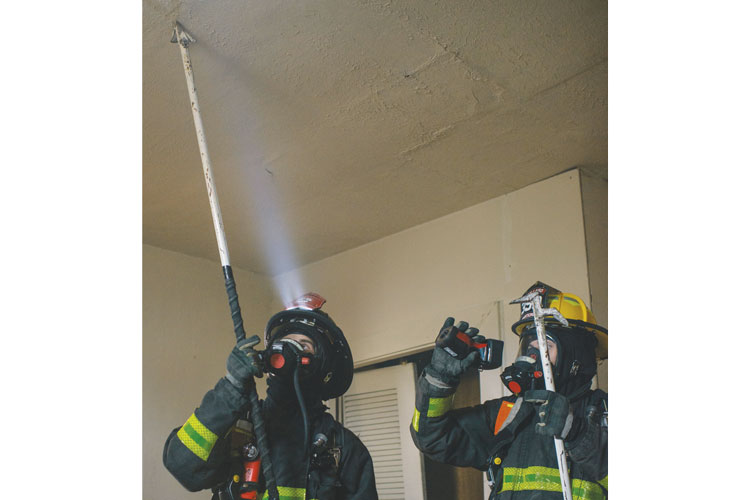 I was visiting a neighboring fire department and talking to the chief about thermal imaging technology, and we found ourselves reflecting on the impact thermal imaging cameras (TICs) have had on firefighter safety. The topic came up when the chief mentioned to me that they responded to a call that morning where they used the TIC to search for hidden hot spots. Sure enough, they found where the fire was hiding by using the TIC. This conversation got me thinking about this article and the importance of using a TIC for overhaul. In fact, one of the best uses for a TIC is during overhaul.

I realize that overhaul is not the most exciting aspect of firefighting, but this operation is necessary and critical to successfully fighting a structural fire and staying safe while doing so. Using a TIC during overhaul can help determine how far a fire has traveled. Without the use of the TIC, hot spots can easily be missed – resulting in the fire reigniting. There are several advantages to using a TIC for overhaul but a critical one is the TIC’s ability to detect the smallest temperature differences that can indicate a smoldering fire that has not been extinguished. By identifying a fire that has the possibility to rekindle, firefighters can help prevent additional property loss and spend less of their time at the scene, which reduces the chance of injury and gets the crew back in service quicker.

When overhaul is performed properly using a TIC, it ensures that the fire is completely out and there is no threat of reignition. Before using the TIC for overhaul, however, firefighters must understand how their TIC displays temperature differences so they are interpreting the data correctly. This means that firefighters must become familiar with what they can expect to see on the TIC’s display. The best way to become familiar with temperature settings on your TIC is to use it during live burn training exercises. During training, firefighters can examine heat signatures on their TIC display by scanning the burn room after the fire has been extinguished. Once the fire is out, everything in the room will show very warm or hot on your TIC. What’s important to remember when performing overhaul is that an object that is hot on the display is hot in comparison to the other objects in the room. Remember, TICs show temperature differences. Once the fire is out, the scene may appear bland on your TIC display. Try spraying water in the room to create temperature differences so your TIC now has other reference points and can generate more useful images for you to interpret.

Most TICs have colorization and temperature indicator functions that help firefighters determine how hot an object is. If your TIC has colorization, then hotter objects will show in color. In overhaul, depending on the temperature thresholds for color activation on your TIC, you can identify hotter objects as they will often appear as a certain color. If your TIC is equipped with color overlays that highlight hot spots, target those colorized areas in your overhaul efforts. Some TICs even have manual controls that enable users to focus on the absolute hottest spots in a scene by colorizing them. These controls are particularly helpful in overhaul as they can quickly isolate potential trouble spots. Keep in mind that although your TIC is indicating a hot spot, it doesn’t always mean it needs to be opened up.

An area may show hot on your TIC display but it may not be hot in comparison to other objects in the room. It’s always best not to abandon your firefighter training techniques when determining a hot spot. Be sure to feel the area using your hand or you can use the TIC to compare it to something with a known temperature. Try comparing it to another firefighter’s hand. If you see an area that appears white on the TIC, place an ungloved hand in the same picture as the object. If the hand appears gray and the object stays white, the object is hotter than the hand. If the spot in question is roughly the same color as the hand, then it is probably not a hot spot that needs attention during overhaul.

One of the best uses of your TIC is for overhaul. Firefighters need to train often with the TIC in overhaul situations so they can become familiar with the colorization features to properly interpret temperature differences. Understanding what your TIC is telling you will help to make the overhaul process safer and more efficient.

CARL NIX is a 32-year veteran of the fire service and a retired battalion chief of the Grapevine (TX) Fire Department. He serves as an adjunct instructor for North Central Texas College and a thermal imaging instructor for Bullard. Nix has a bachelor of science degree in fire administration and is a guest instructor for Texas A&M Engineering Extension Service’s (TEEX) annual fire training in Texas.